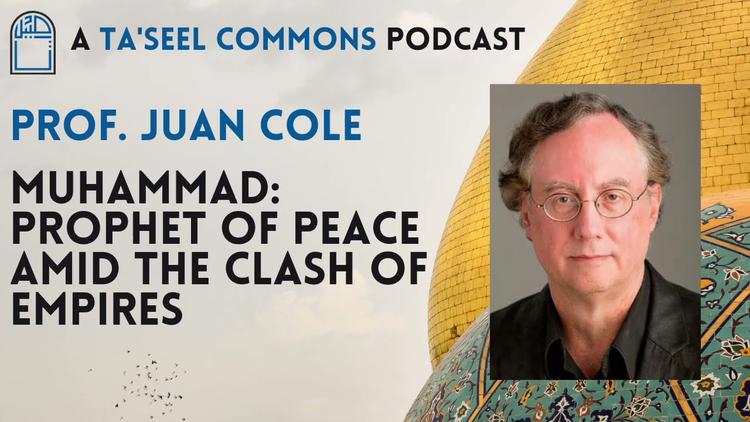 A wide-ranging and in-depth discussion with Prof. Juan Cole on his recent book “Muhammad: Prophet of Peace Amid the Clash of Empires”. The discussion begins with remarks about the question of the sources for such a history, it then situates the life of the prophet in the context of late antiquity and the contemporaneous ‘world war’ between Rome and Persia. Quranic allusions to these geopolitics are highlighted, followed by an illuminating discussion on the original meaning of Islam and Kufr in this early period and the ecumenism of the Prophet in accomodating and embracing the religious diversity of the time. The original theological and social ecumenism of the Quran is in obvious contrast to the later narrative of exclusivism which is a backprojection of triumphalist Abbasid chroniclers.

Juan Cole is Richard P. Mitchell Collegiate Professor of History at the University of Michigan. For three and a half decades, he has sought to put the relationship of the West and the Muslim world in historical context. He is the author of “Muhammad: Prophet of Peace Amid the Clash of Empires”, as well as many other books including ‘The New Arabs’, ‘Engaging the Muslim World’, and ‘Napoleon’s Egypt’

He is the editor and creator of the award-winning Informed Comment news and commentary website – which average 4.5 million page views a year.

He has made various television, radio and press appearances. He has written widely about Egypt, Iran, Iraq, and South Asia. Prof. Cole commands Arabic, Persian, and Urdu and reads Turkish
He has translated works of the Lebanese-American author Kahlil Gibran
And most recently, published a new translation of the persian famous Rubaiyaat of Omar Khayyam.

Ta’seel Commons: Interview with Juan Cole on “Muhammad: Prophet of Peace amid the Clash of Empires”

Ta’seel Commons (Ta’seel: “contextualization, to “give an asl [root] to”) is an online space for disseminating information on contemporary ‘Islams’ and their place in the world.

For nearly two decades digitality has been revolutionizing all sectors, not least knowledge production and knowledge consumption. Many people are predicting the radical reconfiguration of the brick and mortar university as a result of online learning. Utilizing digital tools, Ta’seel Commons provides high quality content occupying the important space between the (purely) academic and the (purely) journalistic.

Ta’seel Commons covers a broad spectrum of topics from Theology to Philosophy, from Sociology to Anthropology, from History to Politics, from Sharia to Ethics. We tackles issue that are current and ongoing, historic and philosophical, sociological and metaphysical, grounded in an approach attuned to western critical sensibilities and the broader principles of the Islamic tradition.