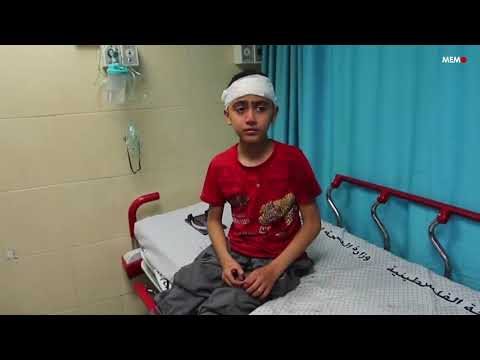 ( Middle East Monitor ) – Last May, Israel launched a series of airstrikes on the Gaza Strip following weeks of increased violence towards Palestinians in Jerusalem and the West Bank. The violence by Israeli police was towards Palestinians who were demonstrating the decision to forcibly evict 28 Palestinian families from their homes in the neighbourhood of Sheikh Jarrah in East Jerusalem, and give their homes to Israeli settlers after a decade-long legal battle. The Israeli Forces also escalated violence in the West Bank and Occupied Palestine during the holy month of Ramadan. It arbitrarily increased restrictions on Palestinians to access the Old City and attacked worshipers at the Al Aqsa mosque compound by using rubber-tipped bullets, grenades and brute physical violence.1

Following the weeks of increased tensions, the Israeli forces launched attacks on the Gaza Strip for 11 continuous days last May (10 May – 21 May), resulting in 256 Palestinian deaths and over 2,000 injuries to the civilian population. This has affected the already dire living conditions in the Gaza Strip, including its already fragile healthcare system. According to the Euro-Mediterranean Human Rights Monitor, the latest Israeli military attacks on the Gaza Strip are an ‘inescapable hell‘.4This brief will explore how the Israeli forces purposely target the healthcare system in the Gaza Strip (amongst other infrastructure targets), and how Israel might, therefore, be guilty of war crimes pursuant to International Humanitarian Law.

Overview of the Gaza Strip

According to the human rights organisation B’tselem, the Gaza Strip is an ‘entirely man-made humanitarian disaster scene‘. It is the world’s largest open-air prison that has been occupied by Israel for over 50 years and under a full land-sea-air blockade for over 13 years. It is one of the most densely populated areas in the world, with more than 5.000 inhabitants per square kilometre.

The blockade on the Gaza Strip has crippled its economy, resulting in job losses across the Strip, because of Israel’s continuous and inhumane restrictions on imports and exports. In 2020, unemployment rates in the Gaza Strip were estimated at approximately 49%. The Gaza Strip has also suffered from a chronic electricity deficit, with an average of 13 hours of electricity per day in 2020. This discontinuous power supply has severe consequences for the population. For example, it affects the water supply and forces, residents, to buy desalinated water instead, which is estimated to be contaminated 68% of the time.

During the last 12 years, the Israeli forces launched 4 major military attacks on the Gaza Strip: 2008-2009, 2012, 2014, and 2021. The 2014 war was the longest and deadliest one of all. It resulted in the killing of 2,147 Palestinians, left 10,870 injured, destroyed 2,465 houses and damaged an additional 14,658 houses. The Gaza Strip had still not recovered from the 2014 aftermath, when the Israeli forces attacked it again in May 2021. Other major events to consider are the Great March of Return protests of 2018- 2019 on the Gaza border, which demonstrated against the illegal blockade on Gaza. In these protests, the Israeli forces killed 214 Palestinians and injured more than 36,000.

The Healthcare System in the Gaza Strip

The healthcare system in the Gaza Strip is fragmented and overburdened. Many patients require referral to hospitals in the West Bank or in Jerusalem when specialised treatment is not available for them in the Gaza Strip. This referral process is lengthy and often not guaranteed, even for severely ill patients. According to a World Health Organisation report, about 40% of patient permit applications from the Gaza Strip were unsuccessful (denied or delayed) in 2018. These patients received no response regarding their application at the time of their scheduled hospital appointment. This movement restriction also prevents health professionals from entering or exiting Gaza. In 2017, about 85% of health staff applying to travel from Gaza for professional training were rejected.

The dire economic situation in the Gaza Strip, coupled with Israel’s control of borders has resulted in severe shortages in essential medicines, medical equipment and disposables. The COVID-19 pandemic has made the situation even more difficult. Hospitals are struggling to cope with the admission of COVID-19 cases, and have a severe shortage in the number of Intensive Care Units (ICUs). Additionally, the Gaza-Strip is short on vaccinations for its two million residents.

Israel’s Attack on the Healthcare System in the Gaza Strip

The series of Israeli forces airstrikes on the Gaza Strip in May resulted in 256 Palestinian deaths, including 66 children and 40 women (of which, 5 disabled people). In addition, almost 2,000 Palestinians were injured, including over 600 children and 400 women (many with serious injuries that could result in long-term disabilities). So far, there have been reports of 10 amputations, 35 paralysis cases and 21 admissions to ICUs. This has overwhelmed the healthcare system, as healthcare workers could not cope with a large number of injuries.

The attacks on civilians do not only have physical effects but also affect people’s mental health. Children face trauma and anxiety due to hearing and/or seeing bombs, witnessing the destruction of their homes or those of their friends and relatives, and grieving the loss of their loved ones. According to one study, published in the Frontiers in Psychiatry, 88.4% of children and adolescents in Gaza have witnessed trauma in their lives.

During the latest airstrikes, about 113,000 people were internally displaced within the Gaza Strip and sought shelter in the 59 UNRWA schools or with host families. The Palestinian Ministry of Health expressed its concern about these displaced people, who were now in areas of inadequate health services. Today, approximately 8,400 people remain internally displaced, mostly with host families and 213 people in two UNRWA schools. This displacement has also resulted in an increased overpopulation in the host families’ homes and neighbourhoods, increasing the chances of deteriorating mental health issues and the spread of infections and viruses, including COVID-19.

OPINION: Why does Israel ban Palestinian mothers from accompanying sick children from Gaza seeking treatment in the West Bank?

During the last series of airstrikes, the Israeli forces completely destroyed 2,300 housing and commercial units, partly damaged 22,618 housing units (many of which have become uninhabitable), as well as destructed multiple water and sanitation facilities, health facilities, and 179 government schools.

The Israeli forces destroyed several neighbourhoods using a ‘carpet-bombing’ method, which intends to separate blocks from each other. Around 160 jets launched simultaneous attacks of thousands of missiles, resulting in the destruction of roads, infrastructure, and public facilities. This has obstructed the ability of ambulances and emergency staff to reach the injured.

The damage to infrastructure has increased the chronic infrastructural and power deficits in the Gaza Strip. Approximately 400,000 people do not have regular access to piped water, due to the bombing of clean water and sewage treatment facilities as a result of the airstrikes. This has worsened the ability to have the most basic hygiene needs, let alone practice the recommended hygiene measures amidst the COVID-19 pandemic.

Even though most damaged electricity lines have now been repaired, daily power cuts remain, with less than 11 hours per day of available electricity in the Gaza Strip since the IOF’s May 2021 military attacks. The recurrent electricity cuts and internet disconnections are preventing people from accessing health support services, any other service(s) that they require, and having their voices heard.

Attacks on Healthcare Facilities and Staff

Israeli airstrikes have damaged nine hospitals and 19 primary healthcare centers in the Gaza Strip. The attack also killed two doctors and wounded many other healthcare workers. The healthcare system in the Gaza Strip, which was already overstretched and under-resourced with shortages in medicines and equipment, is now struggling to meet basic daily needs.

The last attacks have increased and will continue to increase the existing pressure on specialised doctors for limb reconstruction and amputations. As of February 2020, 600 patients in the Gaza Strip were identified by the Ministry of Health as requiring reconstructive surgery. Hundreds more are still waiting to be assessed. These are patients who suffered gunshot injuries during the Great March of Return between 2018 and 2019. Furthermore, over 200 injured Palestinians lost one or more limb(s) due to the military attacks on the Gaza Strip between the years 2006-2016.

The main COVID-19 testing laboratory was hit by the Israeli forces, resulting in a halt of all COVID-19 testing for several days. This has caused a drop in reported COVID-19 cases during the attacks. In June, the number of cases increased due to the resumption of testing. This increase is likely representative of the actual increase of infections during the attacks period, due to overcrowded homes and shelters. COVID-19 vaccinations were also stopped during the escalations, and infections in the Gaza-Strip now represent 93% of all cases in the Occupied Palestinian Territory.

Pursuant to International Humanitarian Law, Israel has committed war crimes and breached its responsibilities as an occupying power based on the Fourth Geneva Convention. These war crimes are not new and have been practiced by Israel since its formation as a strategy to ethnically cleanse Palestinians from their lands.

“Distinction” is a fundamental principle of International Humanitarian Law, whereby a ‘distinction’ or ‘discrimination’ must be made between ‘civilians’ and ‘combatants’, and between ‘civilian objects’ and ‘military objectives’. Attacks may only be directed against combatants and military objectives. According to Article 8 of the Rome Statute of the International Criminal Court, ‘Intentionally directing attacks against the civilian population as such or against individual civilians not taking direct part in hostilities’ is an act which constitutes war crimes.21 Residential and commercial buildings were bombed while civilians were still inside and often without any warning. The Israeli forces’ deliberate bombing of civilian houses and gatherings, and the indiscriminate use of weapons and artillery shells without any distinction between civilians and combatants is a clear violation of International Humanitarian Law and a war crime.

OPINION: The human and material cost of Israel’s assault on Gaza

International Humanitarian Law also prohibits ‘Disproportionate’ attacks. Rule 14 states: ‘Launching an attack which may be expected to cause incidental loss of civilian life, injury to civilians, damage to civilian objects, or a combination thereof, which would be excessive in relation to the concrete and direct military advantage anticipated, is prohibited’. The International Humanitarian Law also prohibits any ‘acts or threats of violence, the primary purpose of which is to spread terror among the civilian population‘. Furthermore, according to Article 147 of the Fourth Geneva Convention, ‘extensive destruction and appropriation of property, not justified by military necessity and carried out unlawfully and wantonly’ is a grave breach of the Convention, and thus a war crime. The Israeli forces have used excessive force on densely populated areas in the Gaza Strip, including the firing of simultaneous air, land, and naval raids, causing massive, widespread, and indiscriminate destruction, and the killing of hundreds of innocent people.

Throughout the years and with the last attacks on the Gaza Strip, Israel has deliberately attacked the healthcare system and the (physical and mental) health of innocent civilians. It intentionally targets the health of civilians in the Gaza-Strip for the purpose of crippling the population as a whole. Israel intentionally and continuously carries out these unlawful actions for the ultimate goal of ethnically cleansing Palestinians from their homeland.

Rasha Kaloti is a Palestinian public health specialist and researcher. She has a Masters in Global Health and Development from UCL, and has worked in public health in Palestine and the UK. She is the founder of the MENA Health Project, an online platform for sharing health research in the Middle East and North Africa.

This article was first published in impactpolicies.org on 27 June 2021