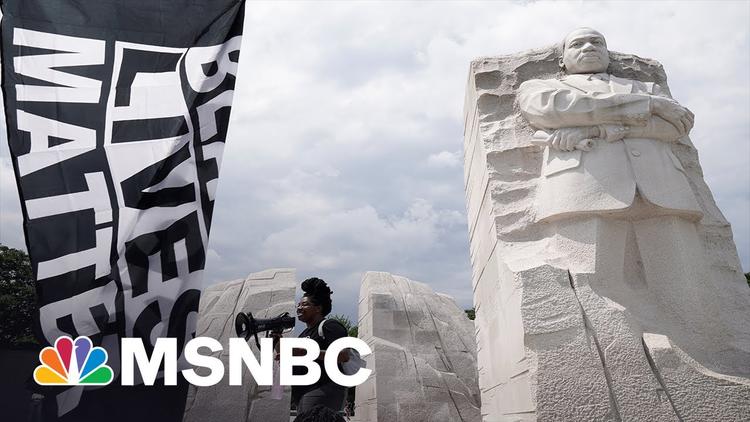 To experience the United States beyond slavery requires far more than the hollow establishment of a federal holiday.

(Waging Nonviolence ) – In my inbox this morning from a major nonprofit organization that should have known better was a Juneteenth celebratory greeting: “We proudly celebrate Juneteenth, the day slavery finally came to an end throughout the South — historically a monumental feat for American history and now a Federal Holiday.” My heart sank. “God, save us from the Juneteenth sales and discounts,” I prayed.

Why is it that the same legislature that does not have the will to pass anti-lynching legislation is willing to quickly legislate my community’s milestone memories into grease for department store cash registers? We deserve more than cotton candy proclamations from our government.

While news of President Lincoln’s executive proclamation reached those in Texas on June 19, 1865, slavery was not “ended throughout the South” on June 19. The 13th Amendment of the U.S. Constitution outlawed slavery across the nation but not before it provided the loophole that would ensure the survival of slavery in new forms. With the words “except as punishment for a crime whereof the party shall have been duly convicted,” the 13th Amendment made it possible for chattel slavery to morph into what Douglas A. Blackmon called “Slavery by Another Name.” Mississippi and South Carolina raced to enact the first of the “black codes,” which were laws that enabled “white landowners to control the labor force through a system similar to the one that had existed during slavery.”

The system created new forms of bondage specifically tailored for these newly “freed” Black Americans. One can argue that the 13th Amendment’s exception has everything to do with the reason Black folks were segregated into redlined ghettos, why Black communities were starved of positive development and investment; and why Black communities were occupied by the police. This exception is the reason municipalities across the country can use their police force resources not on true public safety, but to “squeeze money” out of Black and poor communities. Poor people who can’t pay their “Black fines” are arrested. Ferguson, Missouri was a leader in driving Black people into the prison pipeline in this way long before Mike Brown was killed, and the cauldron of Black rage boiled over.

This loophole shapes the character of the current criminal justice system of 2.3 million people. While I often rage at the very existence of private prisons like CoreCivic (formerly Corrections Corporation of America), GEO Group, and Management Training Corp, they are but a relatively small beneficiary of this exception. As Prison Policy Initiative reports:

Companies benefit from prison labor, but so does the state. We all probably have stuff in our homes right now made by these “excepted” from the U.S. Constitution’s protection.

What does a federal Juneteenth holiday mean in a country with the largest prison population in the world, a population disproportionately comprised of those descended from enslaved Black people?

The dominant narrative in the United States would lead us to believe “crime” happens because people are just bad. These bad people should be incarcerated away from the good people. Except that most crimes are crimes of desperation, born of misery, brokenness, neglect, abuse, and on and on. The United States creates miserable circumstances — particularly for certain communities — and is then shocked when people respond miserably.  The narrative of “inferior humanity” supported and justified slavery. The narrative of “criminally Black” supports and justifies slavery by another name.

In the years I spent visiting youth detention centers in New York, it was a rarity to see a white child. But the 11 and 12-year-old Black boys? The teenage Black girls? That our society answers the problem of poverty, family stress and youth behavior — such as running away, truancy, violating curfew and underage possession of alcohol and other substances — with juvenile detention says that the spirit of slavery for Black and Brown peoples is alive and well.

Slavery has not been abolished. The spirit of slaveholding has not been extinguished. And we certainly have not dismantled the class of masters and overseers.

To experience the United States of America beyond slavery requires more than the hollow establishment of a federal holiday. Push for the passage of voter protection legislation. Step up support and courage for truth-telling on American history. Dismantle the local and federal systems, infrastructures and practices that drive Black people into the prison pipeline. To signal clearly and with finality to the world that slavery has really ended in the United States, let’s end the exception and rid the U.S. Constitution of its loophole. We must outlaw slavery and involuntary servitude forever.

If you truly want to celebrate Juneteenth this year, support the Abolition Amendment. To learn more, visit https://abolishslavery.us/

The Rev. Dr. Emma Jordan-Simpson is the Executive Director of FOR-USA, President of the Board of American Baptist Churches-Metro NY, and a member of the pastoral staff at The Concord Baptist Church of Christ in Brooklyn, NY.

Juneteenth: “What You Need To Know About Juneteenth”