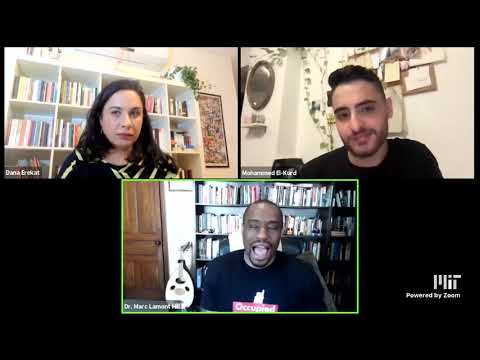 Netanyahu denied charges that his fixation with humiliating Palestinians with this march through their neighborhood was intended to cause a social explosion and forestall the formation of a new government, which will be voted on this Sunday, and which will end his 12-year run as prime minister. However, it seems likely that he is hoping that the ensuing tensions with Palestinians and with Israelis of Palestinian heritage (20% of the population of Israel proper) will damage the incoming government.

Minister of Defense Benny Gantz had earlier canceled the march, which is intended to humiliate the population of East Jerusalem by commemorating the 1967 Israeli conquest of the Palestinian West Bank. It would be like a lot of Americans flying to Iraq each year on April 9 and marching through Sunni neighborhoods of Baghdad with American flags to recall the US 2003 invasion.

Mujadala reports that Netanyahu had insisted that the march be allowed to go ahead this Thursday, despite warnings of the Shin Bet intelligence agency that it could provoke substantial unrest. The procession was originally scheduled during the Muslim holy month of Ramadan and at a time when feelings among Palestinians are raw because a Supreme Court decision may order large numbers of them thrown out of their homes in favor of the Jewish squatters. Tensions in Jerusalem led to major attacks by Israeli security on East Jerusalem Palestinians and even on worshipers at the sacred al-Aqsa Mosque, which provoked Hamas rocket launches and led to an 11-day Israeli Air Force assault on the Palestinians of the densely populated Gaza Strip. Israeli citizens of Palestinian heritage protested in large numbers in several Israeli towns and cities in sympathy with those over the Green Line, something that had not been seen for decades.

Arab 48 reports that Shin Bet chief Nadav Argaman, Army Chief of Staff Aviv Kochavy, and police Commissioner Yaakov Shabtai all argued forcefully that the march should not follow the route the organizers had originally intended, which would have them enter the Old City from Damascus Gate, proceed through the Muslim quarter and arrive at the Wailing Wall. They warned that this route would result in an immediate escalation of tensions in East Jerusalem, as well as in Israeli cities with big Palestinian-Israeli populations.

Channel 11 reported from knowledgeable sources that Netanyahu emphasized at the closed-door meeting that the route of the procession must be the one proposed by the settler organization. He is said to have asserted, “We will not surrender to Hamas. I believe that the march must take place as planned. The purpose is not to foil the establishment of a new [Israeli] government, contrary to what is being said.”

Minister of Public Security and Likud MP Amir Ohana said that the recent operation against Gaza was intended to strengthen deterrence. “What message do you send to Hamas by canceling the Israeli Flag procession in Jerusalem? We thereby grant the Hamas movement the appearance of victory.”

The Likud really seems to be haunted by Hamas, a small party-militia of a few tens of thousands of ragtag, poorly trained and equipped guerrillas ruling 2 million Palestinians while besieged and blockaded by Israel. It would be as though the Biden administration made all its policies so as to make sure that Nicaraguans didn’t feel good about themselves.

Mujadala says that the website of the Israeli newspaper Yediot Aharanot reported that such a “heated argument” took place between Netanyahu and Gantz that they had to suspend the cabinet meeting and then had a two-man, one-on-one session in which they hammered out the compromise of scheduling the march for next Tuesday instead. Netanyahu is thought to have backed off his (and his Likud Party’s) insistence on holding the march this Thursday because he was not assured of winning a cabinet vote on the matter in that case.

Some 370,000 Palestinians live in East Jerusalem, a city of 900,000. Only ten percent of the municipal government budget is apportioned to their needs. The Israeli squatters want gradually to ethnically cleanse East Jerusalem of Palestinians, and are using the Israeli courts to displace them from their homes.

After the cabinet decision was announced, extremist member of parliament from the Jewish Power party, Itamar Ben-Gvir, announced that he would lead a march through Palestinian East Jerusalem on Thursday, since the cabinet had bowed down to Hamas by postponing it.

In another article on Tuesday, Mujadala reported that the prospective Bennett government intends to settle even more Israelis in East Jerusalem and will try to strengthen Israeli claims on the city as their undivided capital by moving more government ministries there physically from Tel Aviv. Israel’s attempt to annex East Jerusalem and parts of the Palestinian West Bank adjacent to it are illegal in international law and not recognized by the Biden administration, though they were by Trump. All this is to say that Bennett’s Jerusalem policies will continue those of Netanyahu, despite all the trouble those have caused.

MIT Alumni Association: “MITAAA | From Ferguson to Sheikh Jarrah: The Black and Palestinian Struggle for Justice”