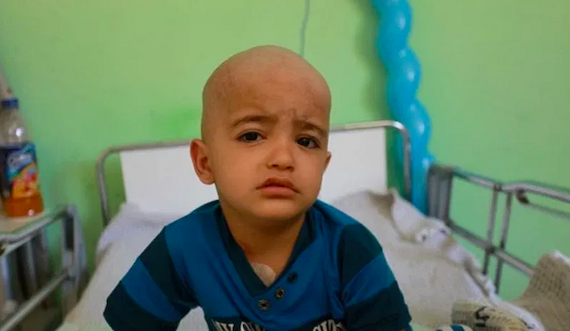 ( Middle East Monitor) – The World Health Organisation (WHO) pointed out in its 2020 annual report that, “All patients and patient companions from the Gaza Strip must apply for Israeli permits to exit the Gaza Strip in order to access hospitals in the West Bank, including east Jerusalem, and Israel.”

Israel’s blockade of the Gaza Strip since 2006 has led to a dramatic deterioration of public health services; the sector is collapsing. The supply of essential medicines, medical disposables, laboratory materials and equipment is restricted severely by the siege. Palestinians in blockaded Gaza who suffer from serious illnesses generally have to seek treatment abroad, in Israel or in the Israeli-occupied West Bank. In order to leave Gaza, though, patients must obtain special permits from Israel, requests for which are often rejected for “security reasons”. In some cases, Israel allows temporary exits from Gaza, but not all. Even if the patients are children, the occupation state frequently prevents parents or guardians from accompanying them for treatment in Israel or the West Bank.

According to the WHO, there were more than 1,750 permit applications each month in 2019 for Gaza patients and more than 7,000 applications per month for West Bank patients. “Access has been particularly problematic in 2019, with the patient permit approval rate declining,” it said. According to a report in the Guardian, fewer than 2,000 permits for parents to accompany their children have been granted. Fifty-six babies from Gaza have been separated from their mothers and fathers when going for treatment outside the Strip since the beginning of 2020.

The Palestinian Centre for Human Rights in Gaza told me about the reasons why Palestinian mothers from Gaza are blocked from travelling with their sick children to the West Bank: the mother’s age is a factor, particularly those aged 18–45; security reasons; and errors in personal data of the accompanying mother, such as her phone number, for example. As soon as the Israeli occupation authorities discover that the mother’s phone is not registered in her name or is used by anyone else, they prevent her from accompanying her child. This is a serious problem because it is normal for a Palestinian woman in Gaza to use a phone that is registered in her father’s, brother’s or husband’s name. The Israeli authorities don’t take this into consideration when dealing with permit applications.

Mohammed Bseiso is a lawyer at the Palestinian Centre for Human Rights. He told me that these “reasons” are meaningless,” They are just excuses. And giving such ‘reasons’ is something new. Until relatively recently, the Israeli authorities would never give reasons unless our lawyers ask.”

The PCHR has managed to obtain travel permits for Palestinians in Gaza, but it is an arduous process requiring visits to several Israeli offices. “As a lawyer at PCHR, I go straight to the legal advisor at the Erez Checkpoint after checking the files carefully. If the legal advisor doesn’t respond, I go to the Israeli Prosecution Office. If there is still no response, I go to the Israeli courts.”

In 2019 alone, the PCHR received 1,041 requests to accompany patients leaving the Gaza Strip for treatment. Of these, they eventually got 550 approved after initial rejections for travel to the West Bank. The others were either rejected for security and medical reasons or are still on the waiting list

Due to permit restrictions, most of the children travel for treatment accompanied by a grandmother or an aunt, adding to the psychological burden on the child and violating their rights to access care supported by their parents. Osama is one year old and from Gaza City; he was diagnosed with leukaemia in June 2020. Israel’s closure of the Gaza Strip meant that he needed an Israeli-issued permit to travel for treatment. After the family faced numerous difficulties, the hospital in the West Bank stepped in and was able to coordinate a permit for him. He was separated from his mother when he travelled, even though he was still breastfeeding. Instead, he had to be accompanied by his grandmother, as the family was warned that his mother might not be granted a permit because of her age.

More than two million Palestinians live in the Gaza Strip, around 40 per cent of whom are children suffering as a result of the dramatic deterioration of the healthcare sector. Almost a third of travel permit applications are for cancer patients; others require specialised surgery, diagnostic imaging or other services unavailable in Gaza.

The result is that people like Hanan Al-Khudari, who was prevented by the Israeli authorities from accompanying her 3 year old son, Luay, to the West Bank for cancer treatment, will continue to make headlines. According to Haaretz, Al-Khudari is a close relative of a Hamas member, and that is why the authorities rejected her permit application.

Access to medical care is a basic human right available almost everywhere. Not in Gaza, though. The Israeli occupation authorities place every obstacle possible through bureaucracy and other means in front of those needing urgent and often life-saving treatment. Patients must provide details of their medical records; appointment letters; evidence of financial support; and confirmation that the treatment is not available in Gaza. And the all-important phone number not registered to anyone other than the accompanying parent. In many cases, approval is given at the very last minute; sometimes the night before the proposed date of travel.

How many people have died, I wonder, waiting for Israel’s occupation authorities to grind their way through the procedures that they have created for themselves? Whatever the number is, it is too many. Nobody should have to go through such humiliating and life-threatening procedures simply to obtain essential medical treatment.