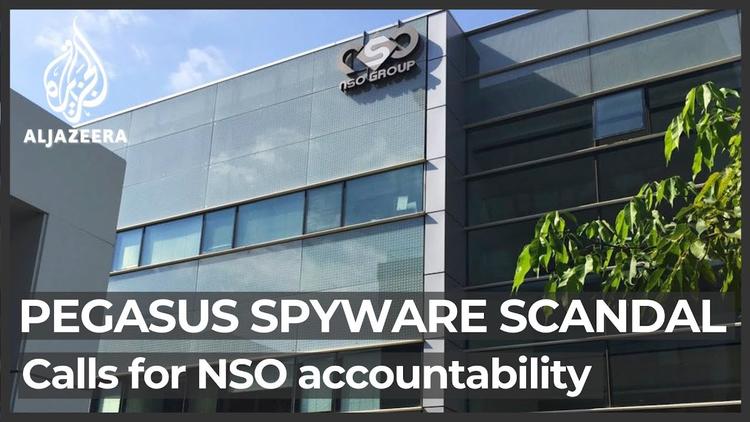 The global hacking scandal involving Israel’s notorious NSO Group has sparked fury around the world as the full extent of the industrial scale spying operation targeting politicians, academics and activists begin to emerge.

As many as 50,000 phone numbers were said to have been targeted for surveillance by NSO Group’s client governments using the Israeli snooping technology, including the UAE and Saudi Arabia, an investigation by the Pegasus Project, a ground-breaking collaboration by more than 80 journalists from 17 media organisations in ten countries, found.

A fuller picture of the hacking related to Monday’s data leak is beginning to emerge with the UAE featuring heavily, in a scandal that has prompted serious questions about the threat posed to democracy by the NSO spyware known as Pegasus.

France’s President Emanuel Macron and 14 other world leaders including Prime Minister of Pakistan, Imran Khan, were on the list of targets. Appearance on the list does not mean that the target was subjected to successful hacking operation.

In addition to Monday’s revelation that the UAE aimed to leverage NSO’s spy technology after the killing of Saudi journalist Jamal Khashoggi to monitor his associates and officials leading the Turkish murder investigation, the authoritarian Gulf state is said to have placed hundreds of UK citizens on its sights.

As many as 400 UK mobile phone numbers appeared on the leaked list including members of the House of Lords, human rights lawyers, academics and activists, according to the Guardian. Data analysis indicates Abu Dhabi was the principal government responsible for selecting the UK numbers.

Those listed as potential targets are seeking answers and want to know what the British government will be doing to address what has been denounced as a violation of UK sovereignty. “I want to know what the British government is doing about it,” Matthew Hedges, a Briton detained in the UAE for seven months in 2018, said after finding out that his number was on the list.

Others targeted by the UAE have issued lengthy public statements denouncing the Gulf state. “While I cannot deny being shocked at the news that my privacy has been violated in such an obscene manner, it comes as little surprise that the source of this criminal breach is an authoritarian undemocratic oppressive regime, which considers freedoms a threat and human rights an abomination,” said Dr Anas Altikriti.

A woman checks the website of Israel-made Pegasus spyware at an office in the Cypriot capital Nicosia on July 21, 2021 [MARIO GOLDMAN/AFP via Getty Images]

” data-medium-file=”https://i2.wp.com/www.middleeastmonitor.com/wp-content/uploads/2021/07/GettyImages-1234089909-scaled-e1626872919261.jpeg?fit=500%2C333&amp;quality=85&amp;strip=all&amp;zoom=1&amp;ssl=1″ data-large-file=”https://i2.wp.com/www.middleeastmonitor.com/wp-content/uploads/2021/07/GettyImages-1234089909-scaled-e1626872919261.jpeg?fit=933%2C620&amp;quality=85&amp;strip=all&amp;zoom=1&amp;ssl=1″ src=”https://i1.wp.com/www.middleeastmonitor.com/wp-content/uploads/2021/07/GettyImages-1234089909-scaled-e1626872909486-1200×798.jpeg?resize=933%2C620&amp;quality=85&amp;strip=all&amp;zoom=1&amp;ssl=1″ alt=”A woman checks the website of Israel-made Pegasus spyware at an office in the Cypriot capital Nicosia on July 21, 2021. – Reports that Israel-made Pegasus spyware has been used to monitor activists, journalists and politicians around the world highlight the diplomatic risks of nurturing and exporting "oppressive technology", experts warned. Private Israeli firm NSO Group has denied media reports its Pegasus software is linked to the mass surveillance of journalists and rights defenders, and insisted that all sales of its technology are approved by Israel’s defence ministry. (Photo by Mario GOLDMAN / AFP) (Photo by MARIO GOLDMAN/AFP via Getty Images)” data-recalc-dims=”1″ data-lazy-loaded=”1″ >

A woman checks the website of Israel-made Pegasus spyware at an office in the Cypriot capital Nicosia on July 21, 2021 [MARIO GOLDMAN/AFP via Getty Images]

Altikriti, who has been targeted by the UAE on various occasions, said that he will be seeking legal counsel and damages along with many of his relatives and friends who have been similarly targeted. Altikriti’s sister, the President of the Muslim Association of Britain, Raghad Altikriti, the first female head of the organisation, also appeared on the list.

Anas Altikriti urged Prime Ministers Boris Johnson “to stand up to such actions carried out by oppressive authoritarian and brutal regimes against British citizens and to act responsibly and unequivocally in the face of such criminality.” He pledged to continue his “long-running campaign to reveal the ugly reality of the UAE regime, and others of such distasteful trends, undeterred by these or other tactics.”

Mohammed Kozbar, the chair of one of Britain’s most well-known mosques, Finsbury Park, also expressed outrage. “I am shocked and angry that my phone has been hacked since 2018 by the UAE government,” said Kozbar. “I cannot understand why since I have never been in the UAE nor have had any involvement with the country.”

Kozbar, whose leadership transformed the Finsbury Park Mosque from one of the most notorious places of worship in London to what many consider to be a model mosque prompting social integration, warned that British citizens like him would be targeted by authoritarian states such as the UAE unless the UK government took urgent action and hold Abu Dhabi and any other countries involved in the hacking accountable.

In what appears to be an attempt to save-face following the global outrage over the hacking scandal, Israel announced yesterday that it had set up a senior inter-ministerial team to assess growing allegations around the NSO Group. Critics however have pointed out that there is a complicity or complete indifference in the country over the hacking scandal as Israeli leaders have shown more interest in taking to social media to denounce Ben &amp; Jerry’s over its decision to withdraw their product from the occupied Palestinian territories, then address what many see as a threat to democracy and human rights around the world. Newly sworn-in President Isaac Herzog even called Ben &amp; Jerry’s decision “a new form of terrorism.”

Despite attempts to distance itself from the NSO Group, critics are not fully convinced by the Israeli government’s claim that it bears no responsibility for the hacking scandal. Raising questions over the relationship between the Israeli government and the NSO Group, the Washington Post pointed out that the spy firm provided at least some information to the government about who is using its infiltration products and what information they’re collecting.

“It’s crazy to think that NSO wouldn’t share sensitive national security information with the government of Israel,” one former senior US national security official who has worked closely with the Israeli security services is reported saying in the Post.

The Post also revealed that the founders of NSO are former members of the notorious Israeli elite spy team known as Unit 8200. Israeli officials trained in the unit are said to flood the world of high-tech start-ups and operate like privatised mercenary spy firms. Likely beneficiaries of the units’ training include the UK Labour Party, which sparked outrage earlier in the year by employing a former staff of Unit 8200.

As the largest single military unit within the Israeli army, Unit 8200 is often mired in controversy over its surveillance of Palestinian civilians in the occupied West Bank and Gaza Strip. The unit is believed to carry out mass surveillance, blackmail and harassment, targeting the entire Palestinian population living under Israeli occupation. It’s not clear how much of Unit 8200’s surveillance system is imported into the NSO Group’s Pegasus software.

Once hacked, the Pegasus surveillance tool can penetrate mobile phones and transform them into surveillance devices able to steal emails, call records, social media posts, user passwords, contact information, pictures, videos, sound recordings and browsing histories, without a user even touching their phone or knowing that they have received a mysterious message from an unfamiliar person.

Al Jazeera English: “Calls grow for Israel’s NSO to be held to account over spyware”