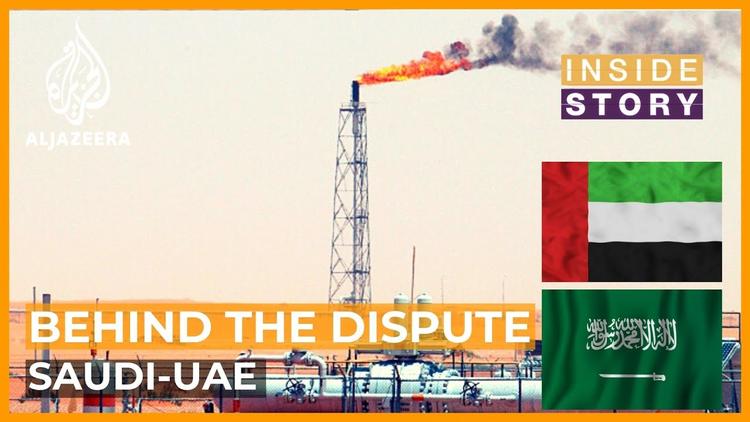 ( Middle East Monitor ) – The disagreement between the UAE and Saudi Arabia over a proposed deal by OPEC+ to increase oil production is the latest sign that the close relations between the two Gulf states, and in particular those of their respective de facto rulers, are turning into a bitter rivalry.

The Saudi-led cartel was forced to postpone the planned output increases on Monday for the third time as the UAE, despite agreeing in principle to the increase, demanded a higher baseline believing it to be “outdated”. The UAE’s oil production is anticipated to rise as a result.

On Friday, the 23-member bloc voted in favour of increasing output by 400,000 barrels a day from next month until the end of the year, “adding another 2 million barrels a day of production by the end of the year.” The impasse sent US benchmark oil prices to a six-year high at the start of the week before taking a fall, linked to the market’s concerns that the UAE would unilaterally add barrels, forcing other OPEC members to follow suit and increase supplies, said the director of energy futures at Mizuho, Bob Yawger.

However, the OPEC stand-off represents just one example of the growing rift between Riyadh and Abu Dhabi, whose Crown Princes, Mohammed Bin Salman and Mohamed Bin Zayed respectively, were once lauded for their “bromance”. This is said to have blossomed during a desert camping trip in 2015 and a mutual love of falconry. The Wall Street Journal called this the “turning point in the burgeoning friendship” two years later, and compared it to a presidential golfing vacation.

Further camping trips are said to have followed, along with at least one excursion to the Seychelles involving luxury yachts. “Bin Zayed has been cultivating Bin Salman now for half a decade,” commented Ahmed Gatnash, co-founder of the Kawaakibi Foundation.

The bond between the two princes has been crucial in Riyadh’s noticeable foreign policy shift. The Kingdom has aligned itself with its smaller, liberal neighbour and emulated Abu Dhabi’s aggressive stance towards Islamist groups such as the Muslim Brotherhood at home and abroad.

The connection between Bin Salman and Bin Zayed has been described as one between a mentee and mentor, with the wily Emirati taking the younger, inexperienced Saudi under his wing. While the disastrous 2015 war against Yemen is viewed widely as a Saudi-led coalition, the UAE under its crown prince’s influence has arguably been the driving force behind efforts to overthrow the Iranian-supported Houthi-led government in Sanaa and reinstate the internationally-recognised President-in-exile, Abdrabbuh Mansour Hadi. Both objectives remain elusive.

Bin Zayed took a leading role in the Gulf Crisis of 2017 by imposing a blockade on neighbouring Qatar over allegations of supporting terrorism and the state’s close ties with Iran. Earlier this year, the dispute came to an unremarkable end with a US- and Kuwaiti-brokered reconciliation. While the blockade was also a UAE initiative, the Saudis under Bin Salman chose to bring about an end to the stand-off, much to the apprehension of Abu Dhabi which had a longer-term strategic vision for it.

According to Dr Andreas Krieg, Assistant Professor at the Defence Studies Department of King’s College London, this trend whereby Bin Salman takes an increasingly assertive role has effectively meant that “the honeymoon period between the crown princes is certainly over.”

Crucially, much of the tension that has built up between the two has been due to Bin Zayed’s insistence on maintaining his own distinct foreign policy, which is something that Qatar was punished for. For example, while both states headed the Arab coalition in Yemen, the UAE sought to carve out its own influence by directly supporting the separatist Southern Transitional Council (STC), whose militia has been fighting against the pro-Hadi, Saudi-backed Islah forces. This conflict of interests has had a negative impact on the coalition’s efforts against the Houthis and caused several setbacks in the power-sharing deal known as the Riyadh Agreement. The STC presently dominates the port city of Aden, which is meant to be the interim capital of Hadi’s government, in addition to exercising considerable control on the island of Socotra, where the UAE is accused of violating Yemeni sovereignty.

Moreover, the UAE has maintained important and lucrative trading ties with Saudi’s regional arch-rival Iran, despite a presumed “cold war” between the two powers. According to Courtney Freer, an expert on the Gulf states and research fellow at the London School of Economics Middle East Centre, “Iran figures largely in Bin Salman’s thinking if only because his ambition to be the regional leader is thwarted by Iran. For Bin Zayed, Iran is not as big an issue.”

Whether it serves as a testing ground for the Saudis, or is another example of the UAE diversifying its security and economic interests, last year’s normalisation between the Emirates and Israel has shown, as with Abu Dhabi’s rejection of the OPEC+ proposal, that the UAE is determined to forge its own path by placing self-interest at the heart of its foreign policy decisions. The consequences of this threaten not only the OPEC bloc, but also the unity of the Gulf Cooperation Council (GCC), which in turn could present future opportunities for both Iran and the Muslim Brotherhood. The bromance is not quite over, but the power couple are a long way away from those fraternal camping trips in the desert.

What’s behind the dispute between Saudi Arabia and the UAE? | Inside Story