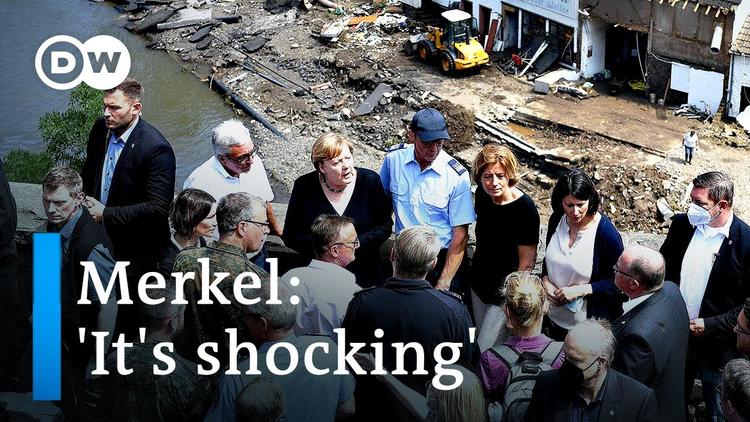 We are again in deep concern.

We were very grateful that our first letter of March 2011, after the terrible Fukushima catastrophe (see attachment), may have helped to reach your quick and for many also surprising decision to finally phase out the use of nuclear power in Germany. We also noticed that you used the argument of the fundamental lack of control of complex systems, since we can never know all starting conditions, elsewhere in political discussions. When we sent you that first open letter on the future of nuclear power just 10 years ago, we expected that the phase-out of nuclear power would also accelerate the addition of renewables. Unfortunately, today we see that the conversion of our economy to a CO2 – emission free supply of our energy and our transport services, announced by so many public proclamations, party programs, coalition agreements etc., is moving much too slowly to really avoid the expected terrible consequences of man-made climate change.

This month’s terrible floods in the heart of Germany and our western neighbours, with over 200 victims, are a drastic portent of things to come for our wonderful blue planet in the years and decades ahead, if we fail to turn the tide decisively enough now.

Our climate researchers can describe in detail what developments the earth’s climate will take in the coming years and decades as a result of the unchecked increase in CO2 and other climate-damaging gases such as methane in the earth’s atmosphere. They warn of the dangers of ‘tipping points,’ the critical, irreversible thresholds toward which we are heading but which we do not know precisely. Beyond these thresholds, further development will accelerate irreversibly. In the important publication in Proc. Nat. Acad. Sciences 115, 8252 (2018) (see attachment), many authors from the IPCC described in detail that much sooner than 2050 we are in danger of crossing important thresholds and sliding into the scenario called ‘Hothouse Earth’, with temperature increases of 3 degrees and more, accompanied by sea level rise of one meter and more still in this century. It is very likely that this threshold will be reached as soon as 2035, in your and our lifetime!

However, all the studies of the world’s best scientists are not able to reliably predict local weather phenomena. The argument of complex systems applies here as well: While weather follows physical laws that we know in detail, the amount of data that would be required to reliably predict weather over the long term is beyond our computational capacity. We are getting better at our predictions, but the key question of what the weather will be like in, say, a world with 500 ppm CO2 in the atmosphere is still unanswerable.

In other words, with the man-made increase of the climate-damaging gases in the atmosphere far beyond the limits of the last 1 million years, we are conducting a global experiment with our blue planet, the outcome of which we can only guess, but not calculate.

However, we can say with certainty, that the weather phenomena we are currently experiencing, such as the present terrible floods, the tornado with wind speeds of about 300km/h recently in the Czech Republic, the worldwide drought and heat catastrophes, are unfortunately only the beginning of the slide into the ‘Hothouse Earth’ detailed in the cited 2018 PNAS paper.

These dire prospects coming our way are also driving Greta Thunberg and activists from Fridays for Future, Scientists for Future, Parents for Future, and many others to say out loud:

How dare we gamble away the future of a dignified life on earth for this next generation, in our generation? The climate demonstrations that are now flaring up again are certainly completely justified with this perspective.

On the other hand, we should recognize that our scientists have not been idle: in the last 20-30 years, through scientific and technical achievements, we have laid the foundations for a rapid transformation of our energy system, and indeed the world economy, towards 100% renewable energy (100%RE), both, from a technical and financial perspective. The cost of solar energy has been reduced by more than a factor of 10, from 50 ct/kWh at the beginning of the century to less than 5 ct/kWh in Germany now. In sunny regions, we will soon harvest solar power for 1 ct/kWh, to produce virtually unlimited green hydrogen or fresh water!

The situation today can therefore be aptly described as follows:

– We have clearly identified the problem before us;

– These solutions are cost-effective, and they create jobs;

– But we are faltering; The strong opposition of the fossil fuel economy is endangering the future of the planet!

Earlier this year, a group of leading scientists, inspired by me, signed a call:

‘Declaration of the Global 100%RE Strategy Group’ (www.global100restrategygroup.org, see attachment), in which this situation is presented, with citations to other scientific publications on this subject.

Therefore, especially in view of the experiences of the last week, we would like to urge you to take the topic of the Climate Chancellor seriously, now at the end of your term of office, and to help courageously to take up the immediate transformation of the economy and our energy system toward100% RE by 2035. You have little to lose by doing so, but potentially much to gain!

What is to be done? There are many detailed analyses of this. Here are just a few key points that require swift action:

The phase-out of electricity production with lignite must come before 2038 for ecological and economic reasons, since lignite is not only harmful to the climate, but also massively damages the life and health of the population in the producing regions through the associated mercury and heavy metal emissions.

Move with priority and urgency to remove all the remaining barriers to the fastest possible expansion of renewable energies. It is simply unbelievable that we are now seeing solar and wind power plants being taken off the grid because the 20-year subsidy under the Renewable Energy Sources Act is expiring, and yet no sensible and unbureaucratic connection regulation has been found! All restrictions on the expansion of wind power must fall: Developers must of course include the residents in the vicinity of new wind turbines, but rigid distance rules are completely nonsensical.

Taxes on self-produced and self-consumed solar or wind power should be dropped. Feed-in to the grid can and should be designed to support the grid. The use of batteries must also be freed from bureaucratic regulations: Battery storages serves to move electricity on the time axis, and on average are neither generators nor consumers!

In the 16 orientation points formulated by ‘Scientists for Future’, it was shown that, in order to comply with the Paris climate protection agreement, an expansion of photovoltaics in Germany to 350 GW and of wind power to 150 GW by 2030 is required. The German government’s current expansion targets are far too low for this and must be adjusted immediately to the levels required for climate protection.

To move the world towards 100%RE, we will need about 30-70 terawatts of PV generation capacity alone globally. One of the authors of our 100%RE declaration, Prof. Breyer of the LUT University in Finland, demands that we should therefore immediately start to build PV factories, aiming for 100 worldwide by 2025, each with a production capacity of 60 GW per year, equivalent to the largest PV factory planned in China today. By doing so we can install the approx. 60 terawatts, 60,000 gigawatts of PV capacity required worldwide by 2035.

Europe should definitely take a leading role in the manufacturing of PV! Today, we in Europe produce just 0.4% of the solar cells produced worldwide. We are slightly better with modules, but these will be equipped with imported solar cells. It is pleasing that there are many initiatives in this direction, united in the ‘European Solar Initiative’. The Swiss company Meyer-Burger has already started to produce state-of-the-art heterojunction solar cells in Saxony and Saxony-Anhalt!

We concluded our letter of March 2011 with the words: ‘Please also consider, Madam Chancellor, the exemplary effect and the enormous opportunities that further German action will have in Europe as well as worldwide. The leading position we have achieved in recent years in the field of renewable energy technologies is seen and admired around the world. The aforementioned reorientation of energy and energy research policy in this direction will be equally noted and will influence the actions of global players towards a sustainable energy supply.’

Attachments: list of initial signatories of this open letter, Open Letter of March 2011, 100%RE Declaration, PNAS article of August 2018.