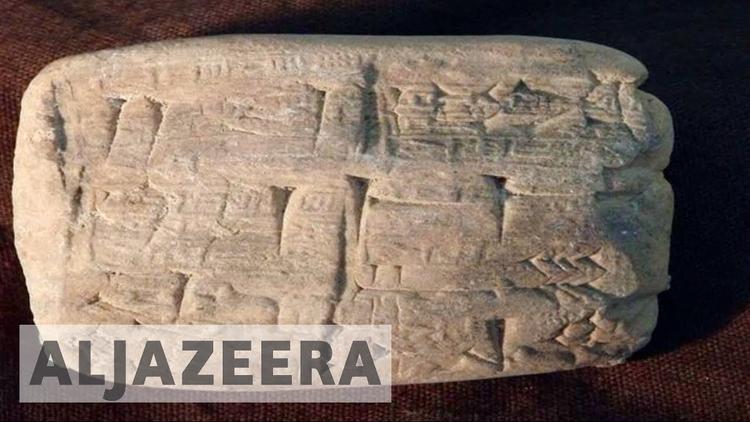 Ann Arbor (Informed Comment) – The US government has returned 17,000 archeological artifacts to Iraq, many of them over 4,000 years old. This, according to Al Jazeera The objects and tablets were looted from the country during the chaos of the Bush administration’s rule of that country and were smuggled into the U.S., then sold at auction as though they were legitimate for purchase.

Iraqi Prime Minister Mustafa al-Kadhimi took the artifacts back to Iraq in a dedicated airplane this week after his visit to the White House.

Officials of the Bush administration were mostly philistines who had no idea that Iraq is home to some of the most glorious ancient civilizations, and, indeed, was among a handful of sites that invented what we now call civilization (cities, role differentiation, writing, astronomy and other sciences, mathematics, literature and epic).

This cultivated ignorance resulted in the destruction of a great deal of the history of Iraq, which can now never be recovered. I suggested the term “Cliocide” for what we Americans did to the country in wiping out so many documents. Clio is the muse of history, and I fear that in Iraq after the US got done with her she doesn’t look so good.

George W. Bush used demeaning terms for the Iraqis, at one point suggesting that they would soon be ready “to take the training wheels off,” as though he had anything to teach other peoples about good governance, and as though Iraqis were three years old.

Fox’s Tucker Carlson alleged that “white men” had created civilization when Iraqis were “illiterate monkeys.” Let’s not get into his racialized notion of ancient history, and just say, “No.”

Wikipedia notes that the US even used some mounds around cities like Babil (the ancient Babylon) as helipads andfor other military uses. Those mounds contained libraries of clay tablets and other remnants of ancient civilization, and they were pulverized by the heavy machinery and helicopters! Wiki writes,

“US forces under the command of General James T. Conway of the I Marine Expeditionary Force were criticized for building the military base “Camp Alpha”, with a helipad and other facilities on ancient Babylonian ruins during the Iraq War. . . In a report of the British Museum’s Near East department, Dr. John Curtis described how parts of the archaeological site were levelled to create a landing area for helicopters, and parking lots for heavy vehicles.”

“Curtis wrote of the occupation forces:

‘They caused substantial damage to the Ishtar Gate, one of the most famous monuments from antiquity […] US military vehicles crushed 2,600-year-old brick pavements, archaeological fragments were scattered across the site, more than 12 trenches were driven into ancient deposits and military earth-moving projects contaminated the site for future generations of scientists.'”

The US never had enough forces in Iraq to supply basic order, and militias and mafias grew up that funded themselves by antiquities looting and smuggling. W.’s minions either couldn’t or wouldn’t do anything about it.

The late Donald Rumsfeld, then secretary of defense, actually went on television and denied there was any looting in Iraq.

The smuggled artifacts just returned by the Biden administration are a small fraction of the country’s — and the world’s — heritage that was looted, and much of the rest has been likely forever lost. And that’s not counting all the artifacts Bush crushed under helicopters and tanks.

I have a friend who is a specialist in ancient Iraq who seriously wondered whether its archeology is over with forever.

Of course, the guerrilla and civil wars and waves of terrorism Bush’s invasion set off in Iraq were much more grave than the archeological losses, but even though we are Americans it is worthwhile shedding a tear for what we did to civilization.

I visited the Iraqi national archives in Baghdad in 2013 and was gravely informed that the Ottoman-era documents for Baghdad Vilayet were in an annex that was bombed by the US Air Force. That is a period I write about as a historian. I wept.

Some 4,000 artifacts were bought by the evangelical Green family behind Hobby Lobby for their vanity project, the “Museum of the Bible” in Washington, D.C. The Greens were apparently insufficiently careful about provenance. These objects were seized by federal authorities and were among the pieces sent home with Mr. al-Kadhimi.

One of the clay tablets tht was seized from the Museum of the Bible was the “dream tablet” of the Epic of Gilgamesh.

The tablet was doubly appropriated, physically stolen but then also put to an inappropriate use by an alien culture.

The Epic of Gilgamesh much preceded the Bible, which echoes it in places. But it did not belong in an evangelical museum anyway, because it is one of the first documents of humanist philosophy. It is in part about a quest for immortality, which inevitably fails. The message: you’ll just have to get used to your mortality. It is sort of the opposite of Christian fundamentalism.