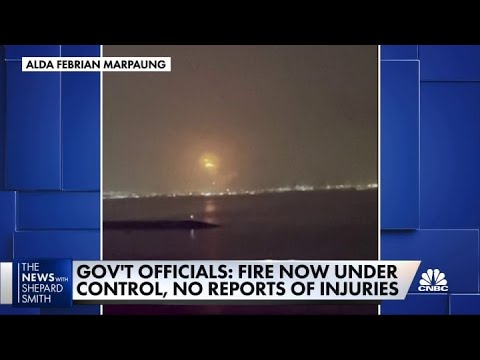 Ann Arbor (Informed Comment) – Alarabiya reports from Dubai on the massive explosion on the deck of a ship that was coming in to dock at the Jebel Ali port there, which could be heard for miles and shook the city’s skyscrapers.

Since the explosion was on the ship, it appears not to have done that much damage to the port itself, unlike the conflagration in Beirut last year. The small container ship that was coming into port appears to have had some containers on its deck with some substance in them that could blow up. It blew up.

Dubai is one of the seven emirates making up the United Arab Emirates, and its wealth comes from being a finance and commerce hub. Its sister emirate to the east, Abu Dhabi, has huge reserves of petroleum. Jebel Ali Port generates 23 percent of Dubai’s gross domestic product.

Dubai’s media office announced that a civil defense team had gained control of the fire on the deck of a ship that had been getting ready to dock at one of the berths at Jebel Ali Port. The office said that no deaths or injuries had been recorded during the fire onboard the container ship, and that the vessel’s crew was evacuated in a timely manner.

Mona al-Murri, the director of the government media office, told Alarabiya that an investigation is being conducted into the cause of the blast, but said that the ship was carrying some containers full of highly flammable materials.

Dubai officials do not expect the traffic in the port, which handles 14 million containers a year, to be affected.

Jebel Ali Port lies just southeast of Dubai on one of the largest deep water ports in the world.

Alarabiya says that it “is a major transport and trade hub in the Middle East and North Africa region. Jebel Ali Port handled 14.1 million containers in 2019. The port is among the top ten in terms of container handling and business globally. Eight thousand companies are based in the Jebel Ali Free Zone, which contributed about 23% of Dubai’s GDP last year and is the largest commercial zone in the Middle East”

The Commander-in-Chief of Dubai Police, Lieutenant-General Abdullah al-Marri, said that there were no radioactive materials on the ship, and that the explosion could have been set off by friction or by high temperatures.

The friction explanation puzzles me because the containers on a container ship typically would not create friction in the materials they transport. Increased temperatures, however, is an explanation that caught my eye. Parts of the world have experience an intense heat wave in recent weeks, not only the Pacific Northwest and Canada but also the Mideast Gulf. The high temperature during the past few weeks in the United Arab Emirates has sometimes hit 120 degrees F., and highs of 111F. are commonplace. Temperatures are much higher in some parts of the world this summer than was normal even a decade ago, as humanity pours ever more billions of tons of carbon dioxide and other greenhouse gases into the atmosphere. Ironically, the UAE is a major oil producer; if in fact extreme heat helped set off the explosion, the burning of UAE petroleum would have contributed to that heat.