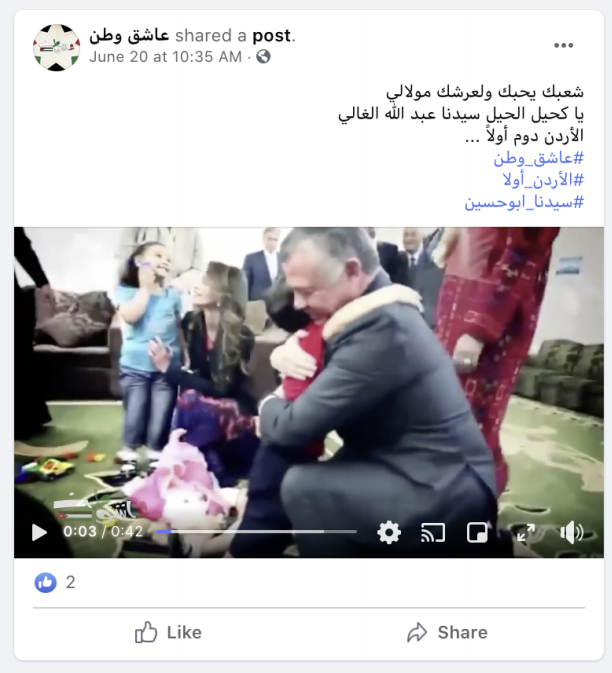 ( Al-Bab.com) – Facebook reported this week that it removed 2,784 accounts in June for “coordinated inauthentic behaviour”. Among those, 947 related to countries in the Middle East and North Africa region: Iran, Iraq, Jordan, Algeria and Sudan.

Facebook treats online campaigns as “coordinated inauthentic behaviour” if they seek “to mislead people about who they are and what they are doing while relying on fake accounts”. Accounts, groups and pages “directly involved” in this activity are removed when Facebook detects them.

Orchestrated misuse of social media is very common in the Middle East – often for political or sectarian purposes – though according to the Stanford Internet Observatory this is the first time an “inauthentic” network operating in Jordan has been publicly dismantled.

Suspicious activity spiked in April, coinciding with a rift inside Jordan’s royal family. King Abdullah’s half-brother, Prince Hamza, was placed under house arrest after being accused of plotting to destabilise the country and 18 others were arrested on suspicion of involvement in the alleged plot.

The Jordanian authorities banned local news outlets and social media users from discussing the affair but the ban was accompanied by a flurry of social media activity supporting the king and the military.

A 20-page report from the Stanford Internet Observatory gives details of the campaign which included Twitter, TikTok and Instagram as well as Facebook. A widely-shared video also contained a recording from the Clubhouse audio-chat platform discussing Prince Hamza, and accused foreigners and Jordanians outside the country of using Clubhouse to foment unrest.

The Stanford report identifies several fake personas posting in support of the king and the Jordanian armed forces, and it says videos were shared mainly through two Facebook pages, “Heroes of the Arab Army” and “My Heart Loves the Army”.

These pages merged popular support for the army with support for the monarchy, and particularly the king, the report says. “Although both pages were created in 2015, they seem to have been repurposed to include a wider range of political content in 2020 and early 2021, which coincided with a rise in protests in multiple cities across the country.”

Facebook post showing King Abdullah hugging a child. “Your people love you and your throne,” it said.

Videos circulated online implied that King Abdullah cares more than Prince Hamzah about Palestine and Jerusalem. One of the Jordanian king’s official roles is as “guardian” of the Muslim and Christian religious sites in East Jerusalem, and Arabic hashtags such as “Alquds_in_exchange_for_the_throne” attacked Prince Hamza by claiming he was willing to abandon control over the sites in order to replace Abdullah as king.

“This theme was featured multiple times in different videos … at times juxtaposed against King Abdullah’s determination to protect Jerusalem at all costs,” the report says. According to Facebook, the campaign was also backed with $26,500 spent on advertising.

The Stanford researchers see these efforts as an attempt by the state in the midst of a royal crisis “to control external narratives with its own set of narratives that promote nationalism and support for the king and push conspiracy theories about external interference.” But they add: “It is unclear whether local citizens believe these claims.”

Overall, the campaign doesn’t appear to have secured much engagement from the Jordanian public. Altogether, Facebook removed 89 accounts, plus 35 individual pages, three groups, and 16 Instagram accounts. The Stanford report notes that while the most popular of the deleted pages had 317,068 followers, 14 of them had no followers at all. The largest of the deleted groups had a mere 213 followers and most of the Instagram accounts contained one post or none. The fake personas also had few followers.

“The network was novel in its use of TikTok sockpuppet accounts,” the report says, “though it appears to have made little effort to create original TikTok content or build an audience on the platform.”