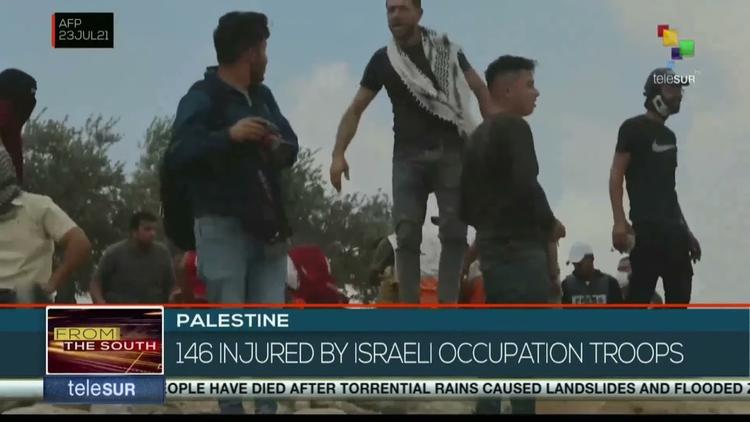 ( Middle East Monitor ) – Beita is the only village around southern Nablus that does not have an illegal Israeli settlement built on its land. The Palestinians are determined to keep it that way.

“The people of Beita completely reject the presence or even the idea of settlements,” activist and photographer Baraa Hussein told me. “They will never be allowed to stay on our land.” 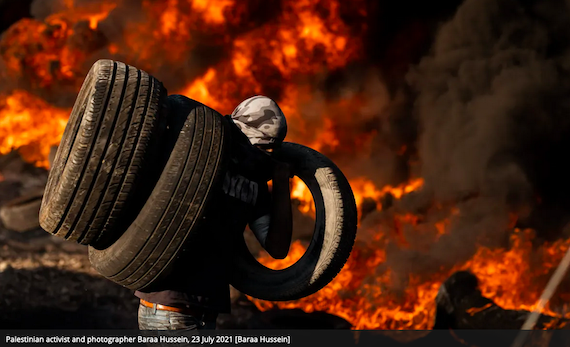 In early May, Israeli settler violence against Palestinians in the village increased. The Eviatar outpost is built on Mount Sabih, on the southern outskirts of Beita, taking up to 30 per cent of the village’s land.

Since then, daily protests have been held against the outpost. The livelihoods of at least 17 Palestinian families – more than 100 people – depend on being able to harvest their olives on the land that they have owned for generations.

“There have been several attempts by settlers over the past few years to take over our land, but this time they took advantage of the world’s attention being focused on Sheikh Jarrah in occupied Jerusalem and attacks against Gaza,” explained Hussein. “At first it started with just one tent, then it grew to 20 then 35 caravans, and now there are over 65 caravans on the mountain.”

Mount Sabih is located in Area C, which makes up some 60 per cent of the occupied West Bank under full Israeli military and administrative control. It is a strategic location, which is why the settlers are desperate to take it over. Located between three Palestinian villages of Qabalan, Yatma and Beita, Hussein pointed out, the goal of the settlement outpost is to separate the north of the West Bank from the south. Moreover, the most important military checkpoint in the West Bank is nearby. Local residents, he said, fear that the outpost will grow and merge with larger settlements nearby.

The night protests involve hundreds of masked Palestinians heading to the mountain to make a noise and keep the settlers awake. Known as “night confusion”, this lasts until dawn. They also direct green laser beams towards the settlement, fire stones from slingshots and set off fireworks.

“The two most prominent resistance efforts are the night disturbances and the burning of tyres,” said Hussein. “This sends a message that they will not have a single peaceful day here in Beita. Our land will stay free of settlers.”

The burning of tyres, he noted, is an effective way to irritate the settlers. They are lit according to the direction of the wind so as to maximise the effect of the smoke. The resistance, insist the villagers, will continue until the settlers and their outpost leave the area. 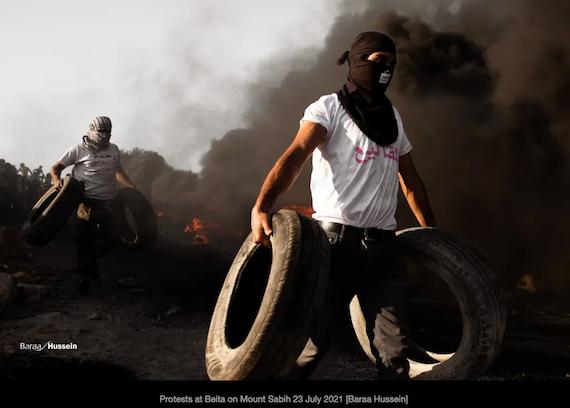 Hussein is “just a photographer” but when he saw that no one was covering the attacks on his village, he decided to use his platform to document events until awareness of what is happening in Beita spreads to the news outlets.

Under international law, all Israeli settlements in the occupied territories are illegal. The Eviatar outpost is illegal even under Israeli law as it was set up without government authorisation. Nevertheless, Israeli soldiers have not only been protecting the settlers but also attacking protestors, killing five Palestinians and wounding hundreds of others.

Last month, 16-year-old Mohammed Hamayel and 17-year-old Ahmed Bani Shamsa, were shot and killed by Israeli forces during the protests. The two were reportedly school friends among the hundreds of Beita’s young people who participate in the protests regularly. When the villagers tried to evacuate the wounded boys, they too were shot at.

“The soldiers aim purposely for the protestor’s legs,” Hussein told me. “This has led to over 600 people being injured with live ammunition. Most of the victims are young men, who are all on crutches now.”

He added that the soldiers are increasing their use of live ammunition and suppressors — silencers —to reduce the noise of the bullets. “The level of protection that the settlers have from soldiers is terrifying. They’re doing everything they can to repress the Palestinians.”

Last week, the settlers left the site following a compromise offered to them by the Israeli government, which could see them return to the area. According to a statement by the Samaria Regional Council which represents Jewish settlements in the north of the occupied West Bank, the outpost’s structures will not be demolished, but rather transformed into a base for Israeli soldiers.

“If the mountain is seized by Israel then the entire industrial zone nearby will be taken away from the Palestinians and eliminated,” said Hussein. “Hundreds of acres will be taken over. It’s also going to be dangerous for farmers, workers and those travelling between cities.”

Israel tends to curb its attacks when under media scrutiny, which is why he is urging the world to sit up and take notice of what is happening in Beita. “Everywhere else in the world, thieves are dangerous and are a threat to society. However, in Beita, where our homes and land are stolen, the victims are seen as a threat to the thieving state which is occupying our land.”

Palestine: 146 injured in clashes with Israeli troops during protest