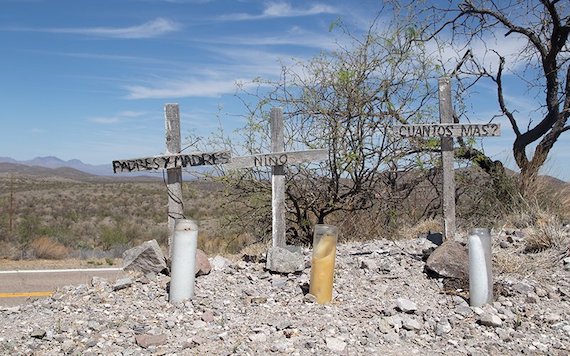 ( Cronkite News ) – WASHINGTON – The number of migrant deaths recorded in the Arizona desert so far this year is on pace to break the record set just last year, as migrants attempt the crossing in the face of a record-breaking heat wave.

Humane Borders and the Pima County Medical Examiner’s Office reported finding the remains of 127 migrants in the first half of 2021. That was ahead of the 96 deaths recorded at the same point in 2020, which set a record of 226 deaths for the year.

The deaths come as migrant apprehensions at the Southwest border have surged to their highest level in years, with almost 930,000 Southwest border encounters through the first eight months of fiscal 2021, more than twice the number for all of the year before.

They also come as the West is in the grip of a historic drought and a blistering heat wave. In June, Phoenix saw high temperatures above 115 degrees for a record-setting six days in a row, while Tucson set daily record highs in that same six-day period.

“It’s so hot that even having water isn’t necessarily going to save somebody’s life,” said Doug Roupp, board chair for Humane Borders. “Some of the people who were found dead had water on them – that’s a tough pill to swallow.”

While groups such as Humane Borders, Tucson Samaritans and No More Deaths work to provide water for migrants crossing the desert, they are also encouraging people not to cross the border now, when conditions are so harsh. 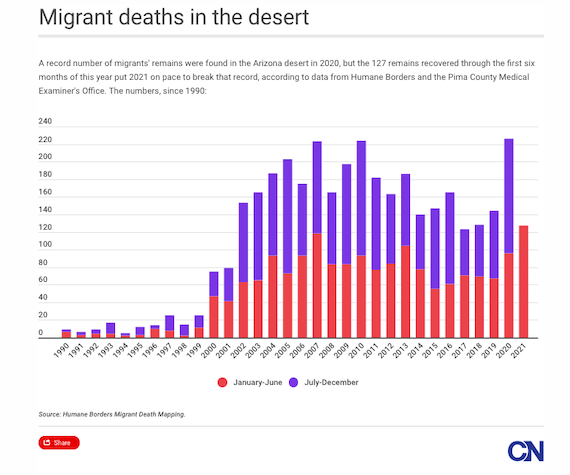 “If you’re going to cross, don’t do it now,” Roupp said, before adding that some people have “just given up waiting.”

“Anybody who is willing to try to cross the desert has to have pretty good reasons to not want to stay where they are,” Roupp said. “Obviously we need a much better overall response to migration, to people seeking asylum, to our immigration policy in general.”

The remains do not necessarily belong to people who died this year, but merely reflect when the bodies were found.

Pima County Chief Medical Examiner Gregory Hess said that some deaths are categorized as “undetermined” when bodies are not found soon enough to definitively state a cause of death. But in most cases, officials suspect those deaths can be attributed to the desert’s harsh elements.

While a majority of border deaths are attributed to exposure to the elements, Hess said that can mean a number of things.

‘It hasn’t stopped’: Arizona volunteers try to stem the tide of migrant deaths in the desert

“It can involve dehydration, it can involve being too hot, hyperthermia; it can even be people that are cold, hypothermia,” Hess said. “We just lump it into one category as exposure.”

Roupp said that in addition to the heat and the surge in migrants, another possible factor behind the rise in deaths is the federal response to COVID-19

“One of the problems with that is each time they cross, they probably have less resources than the first time they did it,” he said.

With 127 deaths recorded through the end of June, Hess expressed concern that “we might have a record year for recoveries and deaths” this year. And those are “only the peoples’ bodies that people have found,” Roupp said.

The desert is “a huge area, much of which is unpopulated,” said Roupp, who expressed concern that the death toll may be even higher than what has been reported.

“When remains are found, they’re found by people who are traveling through the environment. The desert has very remote areas; clearly there’s going to be remains out there that have not been recovered,” Hess said.