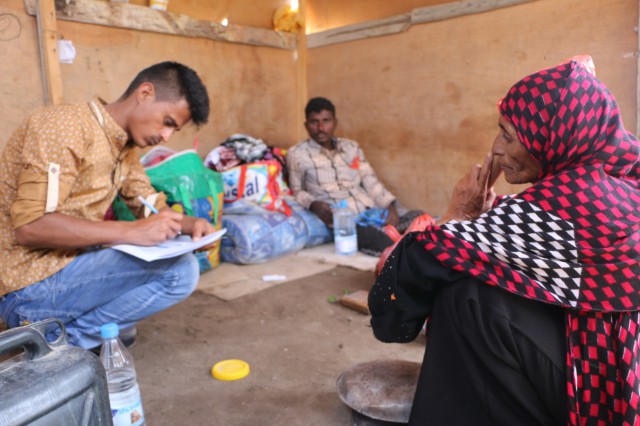 (GlobalVoices.org ) – The latest peace talks in Oman fell apart apart, and for Yemenis, that means going back to square one. Escalations in Marib have worsened the dire humanitarian situation and the suffering of civilians in a conflict that has entered its sixth year.

An activist speaking to a woman with disabilities while documenting human rights issues in Taiz, Yemen. Photo by Watch Team, used with permission.

There was optimism when, in a major shift away from the Trump administration, U.S. President Joe Biden announced that the war had “to end” and that he would terminate “all American support for offensive operations in the war in Yemen.” But this is easier said than done. Once again, the conflict has reached a deadlock. Arms are speaking louder than political negotiations. A major military offensive by the Houthi forces, in the strategic oil-rich Marib—the last province the recognised government still controls in the north—is underway, and nothing seems to be stopping it.

Yemen is often woefully labelled as the world’s “worst humanitarian crisis.” The conflict that broke out in 2015 had a devastating impact on the already impoverished population. The needs are enormous and countless media have shown heartbreaking images of malnourished children or poor living conditions—but this inhuman situation is not new to Yemen.

The country has for decades been at the bottom of most international indices, including on education, women’s rights and freedom of expression. Well before the conflict, a long dictatorship had prevented the emergence of rule of law and development. Yemen was marked by high illiteracy, unemployment and poor infrastructure. Forms of gross human rights violations were occurring, including human trafficking, female genital mutilation and child marriage.

The glimpse of hope and freedom gained in the Arab Spring in 2011, has been all but wiped out by the civil war. The Houthi rebels, backed by Iran, have installed an oppressive theocracy in the north, home to about 70 per cent of the population, while the recognised government in the south—accused of widespread corruption—has failed to provide basic services and good governance.

All parties are hostile to human rights and “show no regard to international law or the lives, dignity and rights of the people of Yemen,” read a statement accompanying a 2020 report from a group of international and regional experts. “A pandemic of impunity in a tortured land” is the title of the third United Nations report documenting human rights abuses in Yemen. According to the report, “The scale and nature of violations should shock the conscience of humanity. Yet, too often Yemen is the forgotten conflict.”

The war has plunged the already impoverished, closed nation into further chaos and lawlessness, making women, and young people more vulnerable to multiple forms of exploitation and abuse. The population lives in a climate of fear and insecurity because of shelling and repressive local authorities. Kamel Jendoubi, one of the UN experts, reported that “Yemen remains a tortured land, with its people ravaged in ways that should shock the conscience of humanity.”

A pervasive culture of unaccountability perpetuates the cycle of impunity and violence. The Saudi-led coalition forces conducted numerous airstrikes that indiscriminately killed and injured civilians. Since any semblance of the rule of law and justice has disappeared, armed tribal groups maintain local law and order by force. There have been numerous accounts of arbitrary detention, torture and extrajudicial executions.

The scale of violence is likely to be higher because of underreporting. Dissident and progressive voices are censored or, because of social pressure, self-censored. With families pushed deeper into poverty, parents are marrying off their daughters earlier and children are forced to work or be sent to the battlefield. Violence against women, which was already widespread, increased exponentially, including domestic and sexual violence abuses, kidnapping and forced labour. 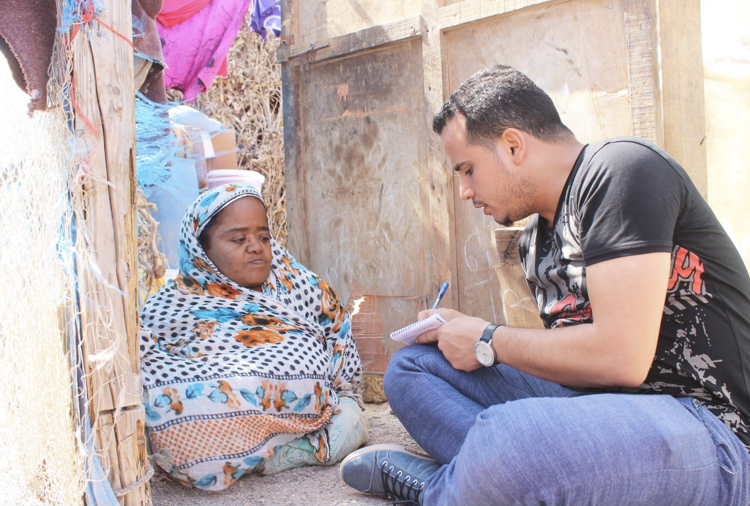 An activist documenting human rights issues in the city of Taez, Yemen. Photo by Watch Team, used with permission

The war has not only worsened daily life and exhausted coping mechanisms but has also put human rights on hold. The collapse of the economy and the repressive environment has caused the shutdown of local media and civil society organisations advocating for human rights. Harassed and attacked, many Yemeni journalists and human rights activists have gone into exile, while many who stayed have had to leave the profession. Several have shifted their focus from reporting and advocacy to humanitarian work. Dawla, a human rights activist, told me:

We were struggling to survive before the war, and everything was a challenge. We could not believe it could get worse. Since the war broke out, it has all imploded. Now there are even more children in the streets and fighting, young women begging and married too young, activists harassed and with no resources.

I used to be a journalist, but the local media can’t pay journalists. Many have left, especially women. The situation is so bad that I have started volunteering in a local organisation to provide aid for poor families.

I’ve since been recruited by the organisation so I can at least support my family. But I don’t have time anymore to report and tell the stories.

The relocation of the scarce skilled human resources into the aid sector is a by-product of the conflict. This is because the humanitarian sector is where funding and paid jobs are. Yemen, the world’s largest humanitarian crisis, is underfunded and international donors are more keen to fund aid than human rights programs. This has resulted in a perverse effect that supports short-term emergencies rather than long-term peace and reconciliation efforts that would lay the ground to end the conflict. Aid has been criticised for contributing to fuelling the conflict. Worse, all parties have been accused of impeding or diverting humanitarian operations. Some aid agencies have had to temporarily suspend their programs in the north because of corruption.

New strategy to end the conflict

As other conflicts have shown, there cannot be peace without justice. To bring an end to the conflict that has decimated the population, the UN experts urged the Human Rights Council to ensure that human rights in Yemen are high on the agenda. As Jendoubi stressed, “The international community has a responsibility to put an end to this pandemic of impunity, and should not turn a blind eye to the gross violations. After years of documenting the terrible toll of this war, no one can say, ‘We did not know what was happening in Yemen.’ Accountability is key to ensure that justice is served to the people of Yemen and to humanity.”

Military actions having failed. Ending a war entrenched in a complex regional geopolitical stalemate requires a new strategy that emphasizes diplomacy over arms, with human rights high on the agenda.

Saoussen Ben Cheikh works for Internews, a media development organisation. She is a project director in a Closed States program supporting freedom of expression in the most challenging contexts of conflict, poverty and repression. She is currently overseeing a wide range of activities with local media and civil society focusing on development, peace building, gender and youth participation.
Saoussen was prior a PhD researcher on State and Conflict in the MENA region in the University of Nice (France).