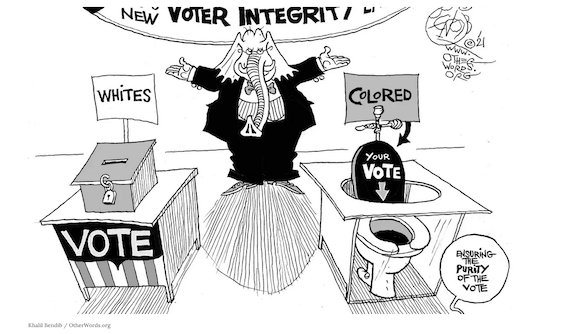 The more Americans vote, the stronger our democracy. For Republican lawmakers, that’s a problem.

( Otherwords.org ) – Ralph Waldo Emerson told of a dinner guest who went on and on about the virtue of honesty, offering his own life as a model of perfect rectitude. “The louder he talked of his honor,” said Emerson, “the faster we counted our spoons.”

That’s my reaction to the cacophony of phony piety arising from Republican governors and legislators who are trying to enact more than 250 new state laws to stop Black, Latino, Asian-American, Indigenous, and other non-Caucasian voters from casting ballots.

They proclaim that they’re not racists, only crusaders protecting the “sanctity of the vote.”

Really? So why are they specifically targeting people of color with their repressive voting restrictions? For example, panicky Republican lawmakers in Georgia tried to outlaw early voting on Sundays.

Why? Because it’s a flagrantly racist attack on the Black church.

For years, a joyous civic tradition called “Souls to the Polls” has played out in Southern Black churches on Sundays prior to Election Day. After the sermon and prayers, congregants, ministers, musicians, and others in the church family travel in a caravan to early voting locations to cast ballots.

It turns voting into a civic, spiritual, and fun experience. What kind of shriveled soul tries to kill that?

Apparently, the same shameful souls in the Georgia GOP who voted to ban local groups from providing water and snacks to citizens forced to wait for hours in line to vote. They actually made it a crime to give water to thirsty voters! (Hey, Republicans: What would Jesus do?)

Excuse me, but voting in America should not be made a misery. The goal (and duty) of every public official ought to be maximizing voter turnout — after all, the more Americans vote, the stronger our democracy.