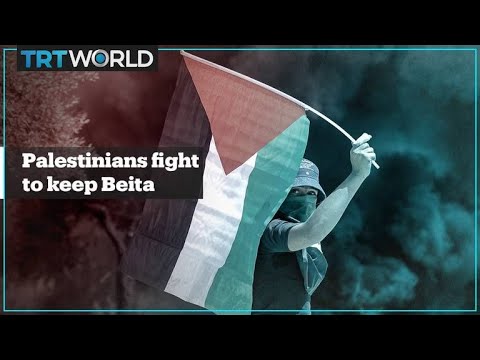 Beita is an icon of the popular Palestinian resistance

( Middle East Monitor ) – The town of Beita has turned into an icon of the popular resistance in occupied Palestine. It appears to have channelled the spirit of the Jerusalem uprising during the day and the harsh activities of Gaza at night, in harmony with the developments in Palestine recently. This was specifically in terms of strengthening the unity of the Palestinian people, wherever they might be, behind the option of all kinds of resistance, especially on a popular level.

Lying south of Nablus, Beita defends its property and land across the adjacent Mount Sabih area, part of which was seized by settlers to establish an illegal outpost that they called Eviatar, after a settler who was killed in a resistance operation there some time ago. It covers dozens of acres on the mountain, but there is a malicious plan to control hundreds more and establish a large settlement to isolate Beita and the neighbouring towns from their Palestinian surroundings, ending up as a major settlement network deep within the Palestinian cities, towns and villages in the West Bank.

The settlers took advantage of the Palestinian and global preoccupation with the Jerusalem uprisings in Bab Al-Amoud, Sheikh Jarrah and Al-Aqsa Mosque followed by the Sword of Jerusalem battle, to establish the settlement outpost in Mount Sabih. The Israeli occupation army paved roads and connected infrastructure networks for the outpost, which is illegal even under colonial Israeli law, and the government actually ordered its removal. However, the former Prime Minister Benjamin Netanyahu passed this particular hot potato and its implementation to put his far-right successor, Naftali Bennett, the ex-head of the settlements council, on the spot.

The people of Beita rose up in defence of their land, future and destiny, by adopting the option of peaceful popular resistance around the clock, inspired by the atmosphere and uprisings in the occupied territories over the past few months. The town and its activities represented Jerusalem during the day and Gaza at night. The people carry out various activities and events during the day, including gatherings, demonstrations, sit-ins, seminars, speeches and festivals, and hold Friday prayers on Mount Sabih. All of this is accompanied by popular chants and traditional nationalist songs, including one specific to the town. At night, Beita and the surrounding area combine to become Gaza, with more robust popular resistance methods to create confusion. This includes the use of loudspeakers, flashing lights, lasers and fireworks, so that the settlers and the occupation army units sent to defend them cannot sleep.

In this way, Beita seems to represent a creative update of the Bil’in-Ni’lin model that has been seen in the West Bank for years, where weekly demonstrations and activities to protect their lands and property from settlers have achieved remarkable results. Beita has also turned into an international issue, like Sheikh Jarrah and Silwan, as political and diplomatic pressures escalated for the Israeli government to dismantle the settlement outpost and prevent it from turning into larger explosion across Palestine.

There are many lessons to be learnt from Beita, most notably the now legendary steadfastness of the Palestinian people and their insistence on defending their land and property against the military occupation and its settlers, using whatever resources they have at hand. Of these there are many, the most important of which are the people themselves who refuse to surrender or accept the “facts on the ground” that the Israeli settlers are seeking to impose by force. We see from this that popular resistance is turning into a way of life for the Palestinians. The Beita model and its creativity has led to calls for caution at all points of contact with the Israeli occupation authorities and settlers, especially in villages and towns where extensive land and property theft has taken place.

In stark contrast to this, the leadership of the Palestinian Authority is absent, helpless and unable to support the town. The PA has virtually abandoned Beita, leaving it to its fate, just as it did with the uprisings in Jerusalem and the Sword of Jerusalem battle in Gaza.

The response of the people of Beita has raised the cost of the outpost for Israel on the political, security and economic levels. Now it is up to the Palestinian political groups and institutions to adopt a serious approach to popular resistance as an essential part of a political programme. This should be developed by an elected and unified national leadership resulting from the rearrangement of Palestinian affairs; the rebuilding of national institutions in a democratic manner; and a leadership that seeks to mobilise the people and invest their enormous capabilities in a comprehensive, determined and extended struggle with the Israeli occupation, within and beyond the borders of historic Palestine.

TRT World: “What’s happening in the Palestinian town of Beita?”