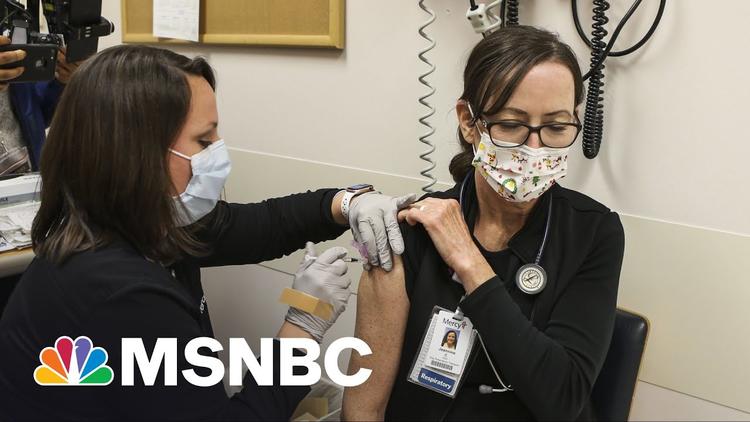 Ann Arbor (Informed Comment) – The Delta variant of SARS-CoV-II is to the original vanilla COVID-19 strain as velociraptors were to gentle plant-eating sauropods. And it is coming for America.

What is worse, the Republican Party and its media arms such as Fox, Newsmax and OAN, are playing the wicked witch to GOP voters’ Hansel and Gretel, fattening them up for the kiln by trying to convince them not to get vaccinated and never to wear masks or socially distance.

The far right wing CPAC conference was full of this brain-dead messaging, to the extent that it should stand for COVID Patients Are Coming.

When he saw the crowds rapturously applauding attacks on vaccination, Dr. Anthony Fauci said he was “horrified.” Crazy Kristi Noem, governor of South Dakota, who personally killed people not only in her state, but, via superspreader events throughout the country, slammed governors who put in mitigation measures. South Dakota’s Covid death rate was 231 per 100,000, among the worst rates in the country.

What Noem and the other flat-earthers don’t realize is that we’re not any longer facing that Alpha variant. The enemy has evolved.

“The Delta variant currently accounts for more than 40 percent of positive tests and is already establishing dominance in some U.S. states,” write Alison Galvani, Seyed M. Moghadas and Eric C. Schneider at The Commonwealth Fund.

They estimate that “Without a vaccination program, by the end of June 2021 there would have been approximately 279,000 additional deaths and up to 1.25 million additional hospitalizations.”

The good news is that most studies show high efficacy of the Covid vaccines against the Delta variant.

The bad news is that in states with large numbers of Trump voters, the vaccination rates are very low.

India could have scared some of us straight if we had been allowed to know anything about India and its delta-driven Second Wave this spring. U.S. television news is not very good. Some of it, like Fox, is anti-news, and people who watch it would need years of detox just to get back to some semblance of reality, much less being informed about the world. But even its less dishonest and more sane competitors are peculiarly focused on political gossip in Washington, D.C., and seldom cover the rest of the world unless there is an election or active combat (and often ignores even those milestones).

So although most of us missed the story, this is what happened. India initially did surprisingly well in dealing with COVID-19. It was helped by having a very young population, when the original COVID-19 strain mainly hit the elderly with the worst symptoms. But the country’s leaders got cocky. By February cases were low, and the Hindu nationalist (and frankly superstitious) government of Narendra Modi opened things up full throttle. Enormous crowds were allowed to gather at religious festivals such as the Kumbh Mela on the Ganges, and Modi held large rallies gathering 50,000 people into stadiums.

All this was happening in an environment where the Delta variant had emerged. It is twice as transmissible as the original and is 85% more likely to put you in the hospital. That is, if it is around and you aren’t masking, social distancing, or vaccinated, you’re in twice as much danger of contracting it from friends, family and strangers as you were with Alpha, and you’re also much more likely to have trouble breathing and end up in the hospital on oxygen or a ventilator if you do get it.

So what with India having let its guard down and people acting as though the whole thing was over with, the Delta variant moved in on them like a deadly invading army. Cases shot up from 15,000 a day at the beginning of March to 400,000 a day by May 7. There weren’t enough hospital beds. There wasn’t enough oxygen. People died untreated. I saw one report on NDTV about a clinic that was abandoned when so many physicians and nurses died that the others just ran away. it was an enormous national catastrophe. Some 200,000 people died in a couple of months, as many as died in the entire previous year. 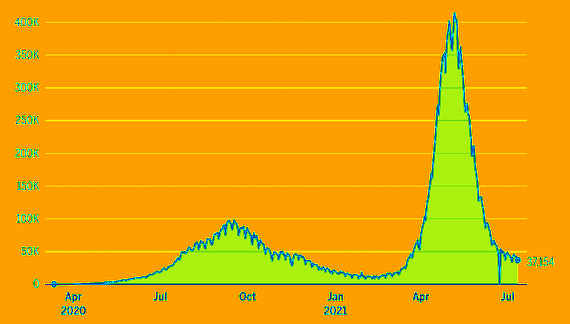 India had to go into emergency lockdown, with all the economic and psychological costs that attend it, in order to defeat this deadly second wave.

The really bad news is that not only is the Delta variant likely to become the primary one in the U.S., and not only is it much more likely to spread and put people in the hospital than its predecessors, and not only are some 1,000 U.S. counties with low vaccination rates sitting ducks for it, but to boot, many Republican governors and lawmakers are so hostile to lockdowns, masking, social distancing, vaccinations and other mitigation measures that the stricken states may not even find it easy to deal with a Delta Wave. That is, the Deep South and other Trumpian parts of the country may be even more vulnerable and more of a tragic story than Hindu India (bad as its Second Wave was).

To the extent that this vulnerability will especially hit Evangelicals, and not only their elderly, it could well accelerate the decline of that form of religion in the United States.