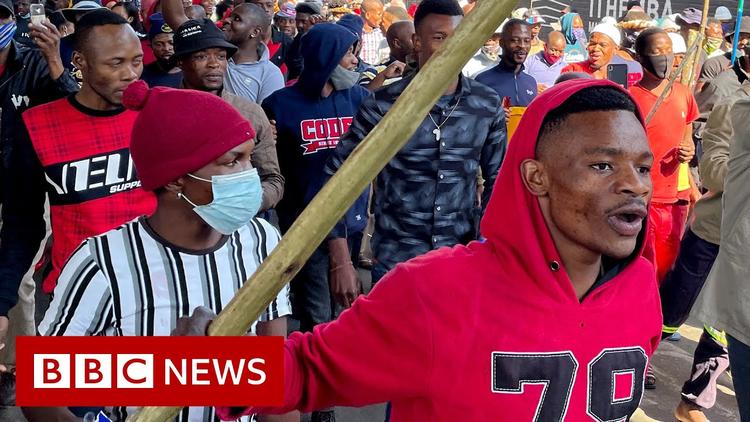 Ann Arbor (Informed Comment) – After former South African President Jacob Zuma went to jail over corruption and contempt of court charges last week, his followers began a concerted attempt to disrupt the country. His lieutenants had threatened to make the country ungovernable if he was sent to jail, according to the BBC.

Zuma refused to come to court over corruption charges, so the South African court sentenced him to fifteen months for contempt of court. Questions swirled last week over whether he would defy the court and refuse to turn himself in, but in the end he did. His supporters immediately began rioting, in KwaZulu-Natal (from whence he hails), in Soweto, in Guateng, and now in Durban. Shops are being trashed, malls invaded, and the police have been so overwhelmed that the military has had to come in for backup. Nearly 100 are dead.

Zuma had been a freedom fighter, and served ten years in jail with Nelson Mandela. But his tenure as president, 2009-2018, was marred by accusations of corruption. Zuma was dogged with charges of rape,throwing government business to friends and relatives, and embezzlement, and people complained that the government had to provide support for all six of his wives.

The BBC reports of the city of Durban, which has been among the hardest hit by rioting:

“Jayshree Parasuramen, traffic reporter on East Coast Radio’s helicopter, could see it all: factories burning, trucks moved to block roads and “thousands” of people looting shops and warehouses, with cars waiting to collect their ill-gotten goods . . . The people, she said, were also “heavily armed”. “The amount of gunshots that we could hear was unbelievable – and then petrol bombs. We couldn’t even hover around those areas because of them opening fire, and then eventually we just had to land, because of the live ammunition that they were using.”

SABC says that there were 5,000 looter vehicles– there were massive traffic jams as they headed for their targets!

Zuma and his circle are deploying his gangs deliberately to throw his country into turmoil because he lost power. Does that sound familiar?

We have already seen how on Jan. 6, Trump assembled a deadly dangerous mob of 15,000 angry cultists at the Capitol in a vain attempt to stop the certification of Joe Biden’s win. They came very close to taking key members of Congress hostage, and perhaps killing some, and stopping that vote.

Trump continues to cultivate far right militias as his potential shock troops, and he defended the Capitol insurrectionists last weekend at CPAC, in the halls of which militia leaders skulked. Oath Keepers, Proud Boys, Boogaloo Bois, and others among the country’s 181 armed militias are “accelerationists” who use violence deliberately to provoke social polarization. This is a tool that the terrorist group ISIL used successfully in Iraq.

The problem is that it isn’t only the militias that might strike. A majority of Republicans is now under the spell of the Trump cult. They actively believe the 2020 election was stolen, and they are sullen about it. Some of them could easily be recruited for violence.

What will happen if Trump goes to jail? The U.S. Attorney’s Office for the Southern District of New York is even now squeezing former CFO of the Trump organization, Allen Weisselberg in hopes that he will roll over on Trump. The Trump Organization has summarily removed Weisselberg from his positions at subsidiaries, presumably to deny him knowledge of present operations in case he does decide to make a deal.

“So hear me clearly: There is an unfolding assault taking place in America today — an attempt to suppress and subvert the right to vote in fair and free elections, an assault on democracy, an assault on liberty, an assault on who we are — who we are as Americans. For, make no mistake, bullies and merchants of fear and peddlers of lies are threatening the very foundation of our country.”

Very few Americans are paying attention to what is going on in South Africa. But they should be. It is a master class in how an allegedly corrupt former president can mobilize violent gangs and masses of ordinary supporters to paralyze a country when facing his just deserts for his crimes.