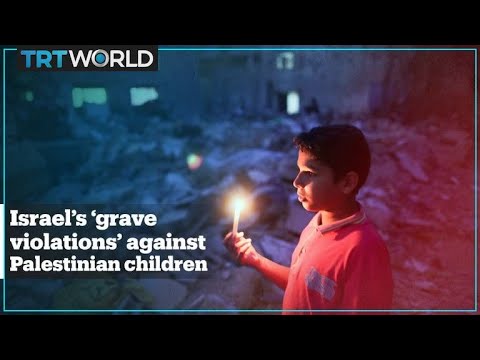 The report notes some violations by the Palestinian Muslim fundamentalist party-militia, Hamas, which runs the Gaza Strip, but the number is minor compared to the violations charged against Israel. The Guterres’ report begins,

Israel and the State of Palestine[1]

76. The United Nations verified the recruitment of two Palestinian boys by Hamas’ al-Qassam Brigades in Gaza.

So there were over a thousand grave violations against 327 Palestinian boys and 13 girls. What was the nature of these violations. Well, mostly they were arrested and put in jail by the Israeli security apparatus, despite being minors:

77. The United Nations verified the detention of 361 Palestinian children for alleged security offences by Israeli forces in the occupied West Bank, including East Jerusalem (361, including 283 in East Jerusalem). Eighty-seven children reported ill-treatment and breaches of due process by Israeli forces while in detention, with 83 per cent reporting physical violence.

Children arrested by Israeli troops in the West Bank (and note that it is soldiers who arrest them) are typically charged with throwing stones or in some other way protesting the soldiers’ repression of the Palestinian population.

But sometimes more is done to them than clapping them in penitentiary:

78. Twelve children (11 Palestinian boys, 1 Israeli boy) were killed in the occupied West Bank, including East Jerusalem (9), in Gaza (2) and in Israel (1) by Israeli forces (8), Palestinian security forces (1), Hamas’ al-Qassam Brigades (1), unidentified perpetrator (1) and explosive remnants of war (1). Of the eight Palestinian children killed in the occupied West Bank, including East Jerusalem, seven were killed by Israeli forces by live ammunition (6) and physical assault during arrest (1), during law enforcement operations (3), demonstrations and confrontations involving stone throwing (2) and Molotov cocktails (1), and a shooting attack against Israeli forces (1). The child killed by Palestinian security forces was shot with live ammunition in a law enforcement operation. One Israeli boy was killed in the occupied West Bank while being pursued by Israeli police after allegedly throwing stones at Palestinians.

Sometimes they are killed. Sometimes little Israeli children are killed, too, which is horrendous. But the ratio is typically 11 to 1 or more; the lives of Palestinian children are much more at risk from the Occupation than are the lives of Israelis from resistance to it.

Then there are the maimings. Makes a person wince:

As a postscript, dozens of Palestinian children in Gaza were deliberately maimed by Israeli snipers in 2018-2019 during weekly rallies held near the Israeli border. Even though protesters, including children, were on the Gaza side of the border and almost all were unarmed, the Israeli military committed serial war crimes by shooting them. Here the UN presents evidence for a further 96 such deliberate maimings, 4 of them of girls.

80. The United Nations verified 30 attacks on schools (11) and hospitals (19), including on protected persons in relation to schools and/or hospitals, attributed to Israeli forces (26) and Israeli settlers (4) in Gaza (4) and the occupied West Bank, including East Jerusalem (26). Incidents involved air strikes (4), settler attacks (1), attacks on medical personnel (18) and threats against teachers or students (7). The United Nations verified one incident of a school being used for military purposes in Gaza by unidentified perpetrators. Separately, 94 other interferences with health (5) or education (89) by Israeli forces (90), affecting the education of more than 6,900 Palestinian children, and Fatah’s Tanzim (4) were verified in the occupied West Bank. Most verified interferences involved Israeli force closures or denial of teachers’ and students’ access through checkpoints (39), Israeli forces firing tear gas or other weapons in and around schools (22), or threats of demolition (9). Self-identified members of Fatah’s Tanzim dismissed students and teachers from four schools owing to demonstrations.

The Israeli army frequently closed schools or assaulted teachers and students, or set up checkpoints on Palestinian territory and refused to let Palestinians get to their schools. The education of 6,900 Palestinian children were interfered with by Israeli troops in this way.

Let me just underline that Israeli bureaucrats engaged in the banality of evil killed 3 Palestinian children in Gaza by simply not permitting them to leave for medical treatment. Since Israel has the Gaza Strip under blockade, it doesn’t have proper hospitals and its physicians cannot treat many serious diseases. Over a fourth of Palestinian requests for children to get out of the Strip for treatment were significantly delayed, affecting 659 children. But for three, the delay was fatal.

83. While I note a decrease in grave violations in 2020, I remain deeply concerned by the number of children killed and maimed, including through the use of live ammunition during law enforcement operations, and I urge Israel to continue to investigate each case where live ammunition was used, as required by procedure, and urge the authorities to pursue accountability for violations against children.

84. I urge the Israeli authorities to review and strengthen measures to prevent any excessive use of force, to ensure that force be used only when necessary and to minimize the effects of its forces’ operations on children and ensure accountability in all cases involving the killing and maiming of children. I further call upon Israel to better protect schools as places of learning. Taking note of the decrease in detentions, I reiterate my call upon Israel to uphold international juvenile justice standards, including use of detention as a measure of last resort and for the shortest appropriate period of time, and end the administrative detention of children, prevent all forms of ill-treatment in detention, and halt any attempted recruitment of detained children as informants. Of concern are continued allegations of attempts to recruit detained Palestinian children as informants.

85. I am also concerned by the two incidents of children recruited by al-Qassam Brigades. I call upon al-Qassam Brigades to cease the recruitment and use of children and to abide by its domestic and international legal obligations. I urge all Palestinian armed groups to protect children, including by preventing them from being exposed to the risk of violence or by abstaining from instrumentalizing them for political purposes.

[1] For the purposes of the present report, the present section provides information on grave violations in the occupied West Bank, including East Jerusalem, the Gaza Strip and Israel.

[2] Any action that causes a serious, permanent, disabling injury, scarring or mutilation to a child.