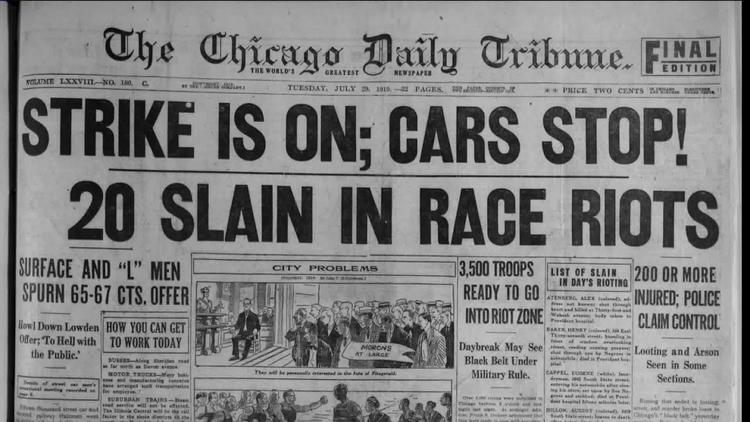 Chicago (Special to Informed Comment) – This week marks another infamous anniversary in US history: the Chicago race riot of 1919. It started when white beachgoers threw rocks at Eugene Williams, a black teenager. He had drifted on a homemade raft from his neighborhood beach toward a white section of it, where a group pelted him with stones. Prevented from coming ashore, he was stranded in the water and drowned.

After Williams’ murder, and fueled by rumors of a Black uprising, neighborhoods in and around the Black Belt, a densely-populated African-American area on Chicago’s South Side, exploded in violence. White rioters looted and burned Black homes. Young men pulled Black passengers out of streetcars and assaulted them. Gangs from the ethnic Irish and Eastern European neighborhoods bordering the Black Belt would make forays into it, grab whomever they could, and beat them. Out of defense or retaliation, whites were also killed.

Even before the riot, white members of so-called athletic clubs enforced Chicago’s unofficial color lines. They often did so with the aid of bricks and baseball bats. Violence was nothing new to them.

My grandfather, who grew up in one of the city’s immigrant enclaves northwest of the Black Belt, was nine years old that summer. Many years later, he told my father he witnessed what amounted to urban lynchings.

When it was over, 38 people were dead. Twenty-three were African American, and 15 were white. Mobs made over 1,000 people homeless after burning or ransacking their houses or apartments.

For many looking back at events like this, they rightly assume that frequent mob violence and officially-sanctioned racial divides are things of the past. Since racism is often understood as segregation and lynching, and because those no longer exist to the degree they once did, then they reason that racism must be over. America should be congratulating itself on social enlightenment, not beating itself up over past transgressions.

Politicians and media personalities endlessly promote the notion that it’s all behind us. Former U.N. Ambassador Nikki Haley — despite her admission that her immigrant parents experienced discrimination — said, “America is not a racist country.” Fox News’ Brit Hume opined that racism engrained in public and private institutions no longer exists. “I don’t think we are a racist country … I think most Americans believe it [the US] once was systemically racist,” he said.

It’s true that many think it once was like that. Yet, the absence of lynching is not racial harmony. Effacing legal segregation has not ended a range of disparities. Poverty and the problems stemming from it are also forms of violence. Low wages, racist lending practices and discriminatory laws have disproportionately affected African Americans and other People of Color. These are not just some old vestiges of our uninformed past. They are real and affect people in 2021.

In 1919, African American men in the Black Belt earned less than their white counterparts in the same industries, faced rejection or discrimination in labor unions, and were often the first to be fired when the economy soured. Later, in the 1930s, many Black working families could not get loans to buy a home or business. In a process called redlining, the federal government and banks mostly refused to lend money to those who lived in what were considered high-risk lending areas, even if rates of employment were no different than in white neighborhoods. Compared to surrounding white communities, there has been comparatively less wealth passed down through the generations and a marked lack of investment in communities on Chicago’s South Side.

Although redlining is over, bias in lending is still a relevant issue. A 2020 analysis conducted by Northwestern University found that “In the mortgage market the researchers found that racial gaps in loan denial have declined only slightly, and racial gaps in mortgage cost have not declined at all, suggesting persistent racial discrimination.” As a result, home ownership, the primary generator of wealth, is far less in African American communities and is one of the drivers of today’s economic disparities. The Institute for Race and Public Policy at the University of Illinois at Chicago revealed that the poverty rate for Black families is just over 30 percent compared to ten percent for whites.

Some US labor laws have never protected numerical minorities, particularly African-American women. One in particular still doesn’t. In 1935, the US Congress passed the National Labor Relations Act (NLRB). Over fierce Republican and big business opposition, the law stipulated employees could legally form and join labor unions, as well as collectively bargain with employers. However, it excluded domestic and agricultural workers. Many southern Democrat lawmakers refused to pass President Franklin Roosevelt’s other New Deal legislation if labor rights were extended to nannies, maids, cleaners and sharecroppers, many of whom were Black. According to Juan Perea, a professor of law at Loyola University Chicago, “[T]he exclusion of agricultural and domestic employees in the [NLRB] should be understood as part of the pattern of racist exclusions enacted in the major New Deal Era statutes.”

In the Black Belt during that riot year and for many decades after it, a disproportionate number of Black women worked as domestics; they cared for others’ children, cooked meals and cleaned houses. For thousands, it was the only employment available since they were often shut out of better-paying jobs and would continue to be for years to come. Largely forced into domestic service, there were no legal options to improve their working conditions and pay.

Today’s domestic workers face much the same, and the law is still on the books exercising its discriminatory power on over two million people who work very hard for very little compensation. Perea writes that “Most … workers live in grinding poverty unimaginable to most readers…” and “endure … sometimes brutal working conditions …” Most domestic workers, about 90 percent, are women and over half are women of color. According to the Economic Policy Institute, domestic workers earn an average of $12 an hour and are “three times as likely to be living in poverty as other workers.” Only ten percent have health insurance.

In the old Black neighborhoods of the South Side, a disproportionate number of residents work in healthcare services, which include home healthcare aids, a profession considered domestic employment. They assist elderly or handicapped people with daily needs, such cooking meals, getting dressed and using the bathroom. They earn little money and have no legal right to organize or join unions. Changing the law could lift many people out of poverty. A raise in the minimum wage would have done the same. Most lawmakers in Washington, D.C. are opposed to changing the law and raising hourly pay.

Violence on the scale and frequency of the Chicago race riot 102 years ago has receded. That’s good, of course, but it’s also a low bar and should give us little cause to congratulate ourselves. Full equality would mean addressing the institutional racism that many deny even exists.