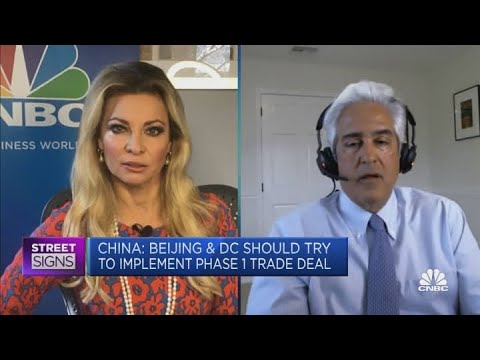 Ann Arbor (Special to Informed Comment) – Regarding China, Joe Biden’s Foreign Policy Team has embraced the zero-sum rhetoric of the Trump administration. That approach could bifurcate the globe politically and technologically along racial lines, but instead of race, the project has been marketed as a contest of values.

Zero-sum rhetoric didn’t begin with Trump. It became popular among the Washington elite during the nineties following the publication of Samuel Huntington’s theory of the “Clash of Civilizations.”

Writing in Foreign Affairs, Huntington argued that liberal values like equality and justice are unique to the West. Although untrained in Asian languages or history, he declared that, with few exceptions, the “Muslim,” “Hindu,” “Buddhist” and “Confucian” traditions would never accept our values. This, he argued, would inevitably lead to a clash of civilizations.

Experts writing in venues like Foreign Affairs have repeatedly exposed the theory’s shortcomings, such as its self-serving accounts of non-Western traditions, but there remain plenty of supporters, including China hawks in the policy establishment.

The most dangerous upshot of the theory is the assumption that non-European peoples are somehow incapable of embracing those values Huntington identified as Western. Small wonder that White Nationalists also favor Huntington-style rhetoric, justifying attacks on Asians and other minorities as a defense of “Western Civilization.”

The puzzling part is, why should a man like Joe Biden adopt the idea? Recently the Economist recognized the contradiction between Biden’s professed values and his foreign policy, suggesting that “Because politics in Washington is broken, [Biden] seems to feel that he needs the spirit of Pearl Harbor to help rekindle a sense of national purpose,” but the article added, “That is a miscalculation.”

That contradiction is especially evident in one of Trump’s core programs, “The China Initiative.” In a letter to Joe Biden, community and civil rights groups charged that under this program Chinese scientists were being prosecuted for activities that “are not normally treated as crimes except under the pretext of combating economic espionage.”

The U.S. Department of Justice denies that race is a factor, but the letter noted that “naming only China in a DOJ initiative ignores threats of economic espionage by other nations.” Extensive Israeli spying on the U.S. for instance, didn’t concern Trump, and the Biden administration tolerates it, yet alleged China spying is labelled a major threat.

The APA refers to the China Initiative’s often failed cases against Asians as racial profiling, and it is, but that term fails to capture the true nature of the problem. Non-Chinese academics also have been charged under the program, if they can be associated in any way with China or things Chinese.

The legal principle at stake then is not just racial profiling, but guilt by association. That principle appears commonly throughout European history, because aristocracies routinely assign innocence and guilt according to race, religion, or social class. In direct contradiction to Huntington’s thesis, that idea was rejected as tyrannical in China early on and for much of later imperial history.

Some two-thousand years ago the Han empire disbanded the feudal lords and issued a law repealing the old practice of guilt by association. Why? In feudal societies what really counts is your group (noble, common, Christian, Hindu, Muslim), while in post-feudal societies, like the Han empire, it’s the individual that counts.

“The purpose of law is not only to punish crime,” the law read, “but to protect the innocent.” Noting that under the previous law, innocent people could be punished for crimes they didn’t commit, the edict rejected that principle because “Any law that inflicts harm on (innocent) people is tyrannical!”

This was a landmark decision because it acknowledged that ordinary taxpayers enjoyed certain rights, like the right to remain unmolested by the state unless you, as an individual, had actually committed a crime. That law was enshrined as exemplary from the 11th century until the end of the imperial age.

According to the Huntington thesis, Chinese people should have been incapable of embracing values like that—though they did—while those same values should come naturally to people in the West. Yet guilt by association has become increasingly normative in the U.S. of late.

Donald Trump’s ban on visitors from Muslim nations is a well-known case, but a recent Congressional report shows that the practice goes back to the Obama years and continued until just recently.

According to the New York Times, under President Obama’s watch a “rogue” official in the Commerce Department created a special unit targeting career officials of Asian descent on suspicion that they were colluding with China. Although the targets often were “employees renowned in their professional fields,” investigations could be prompted with scant evidence and involve unauthorized intrusions into the target’s private life.

Today, most would call that racial profiling, but that fails to convey how guilt by association confuses individuals in a group, with the group. In an article recommending an end to the China Initiative, Margaret K. Lewis showed how, in the eyes of the DOJ, all Chinese individuals get compounded into an abstraction called “China”:

“‘China’ as used in the DOJ’s ‘China Initiative’ conflates government, party, national origin, and ethnicity into an amorphous threat. ‘China’ itself is anthropomorphized into a villain that steals and cheats.”

The China Initiative violates another liberal, Western value, namely that punishment should be commensurate with the facts of the crime. The Trump/Biden China Initiative abandons that view.

That may be why a body of scientific and civil rights groups petitioned the House of Representatives to hold a hearing examining DOJ investigations “based on misguided fears of economic espionage and intellectual property theft.”

The document maintained that too often the charges are wildly incommensurate with the transgression. The government in essence is trying to “transform what is at best a garden-variety employment dispute … into a string of federal fraud offenses” that carry sentences of up to 50 years in prison.

Margaret Lewis’ op-ed also noted that now “What counts as a national security concern has expanded from trade secret theft (with a foreign government as the intended beneficiary, i.e., economic espionage) to broader connections with foreign governments (and entities linked thereto), even if no actual or attempted transmission of intellectual property occurs.”

Possibly the most alarming outcome of the investigations is that, according to the civil rights groups who appealed to Congress, “DoJ officials have cited common academic activities, such as reviewing grant proposals for Chinese funding agencies and advising Chinese students”, to allege academics “sided with China in a global competition for scientific supremacy that imperils US national security.”

Once that is allowed, any action can be framed as criminal simply by moving the hysteria scale up or down to suit your prejudices.

If a scientist writes a letter evaluating a colleague’s research, that can be treated as collusion with an enemy that is not, in fact, at war with the U.S., unless one equivocates on the war metaphor, treating it as literal. Although Trump/Biden rhetoric associates predominantly white nations with “rule of law,” what we have here is a freely sliding scale that makes an absolute mockery of law.

To its credit, the DoJ has dropped charges in some high-profile cases such as that of Gang Chen at MIT, and more recently that of Tang Juan at the University of California. But many more remain under indictment or in prison for dubious reasons.

Most egregious among these may be the case of Anming Hu, which “fell apart and ended in a mistrial after FBI revealed serious misconduct, including falsifying information and fabricating facts in its failure to find a non-existent spy in Knoxville, Tennessee.”

According to The Intercept, the FBI followed Hu for 21 months looking for evidence to use against him, rather than working from a specific crime and then seeking the perpetrator. The Intercept noted that “Hu’s case follows a long history of FBI surveillance of ethnic Chinese scientists in the U.S., some of it with disastrous results” going back to the 1960s.

None of that matters to the FBI, which wants to reopen the case, provoking outrage from civil rights groups and some members of Congress.

It would appear that Huntington and the FBI share the same MO: both ignore the facts, drawing conclusions from foundational beliefs about racial hierarchy; and both routinely confuse individuals in a group, with the group. This renders both projects baseless: you can’t ground your democratic values on theories of racial superiority, especially when those theories contradict the historical record.
The fact is, neither monstrous actions nor noble aspirations can be uniquely assigned to East, West, North or South. China, Russia, and scores of other nations could be accused of having adopted guilt by association, at one time or another. But other nations don’t claim to be unique guardians of justice. The abuses of the China Initiative are shocking precisely because of Biden’s sanctimonious claims for the U.S. and “like-minded” nations.

The very use of the term “like-minded” should set off alarms for U.S. citizens, because it’s a thinly veiled appeal to racial purity. Just as when the DOJ turns an entire nation of individuals into an “anthropomorphized . . . villain that steals and cheats,” that phrase promotes xenophobia as a political tool. Far from advancing democratic values, it sanctions political tactics historically favored by fascist regimes.

When a democratic president does that, should we wonder why justice—that core, “Modern, Western,” value—should be the first victim to fall?

This revised version of an article published in the South China Morning Post appears here by the author’s permission.