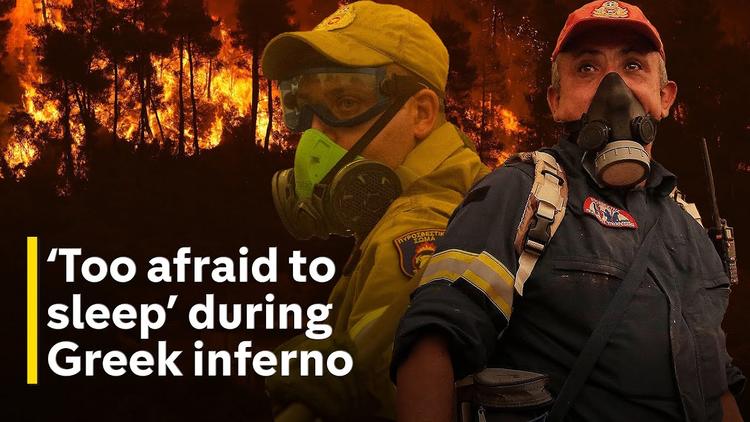 Ann Arbor (Informed Comment) – The Intergovernmental Panel on Climate Change has issued its sixth assessment report. The product of vast international cooperation, the report reflects the scientific community’s certitude that the globe’s climate is rapidly changing as a direct result of humanity burning coal, gasoline and natural gas, putting tens of billions of tons of the deadly heat-trapping gases carbon dioxide and methane into the atmosphere every year.

Scientists are cautious and usually avoid categorical statements. This year’s report says, “It is unequivocal that human influence has warmed the atmosphere, ocean and land.”

You can say that again. I watch a lot of cable news for my sins and have been gobsmacked at how they are all ignoring how the coast of Turkey burned up recently and now Greece is on fire. Greece, the font of European civilization. I’ve been studying Greek for the past few years and before the pandemic went to Athens for a few weeks every summer. It was mostly very pleasant, though a week or so could be hot. This year, the wildfires are encroaching on the capital, and it is like 118 degrees F. (!!!) Even islands like Evia are in trouble. Mediterranean islands burning up.

The networks aren’t really covering the Dixie fire in California that much and it is even in America. The US Northwest is still having extreme temperatures. One Canadian town had 108 degrees F. I mean, that is nuts. And it is only the beginning if we don’t stop burning coal and gasoline like yesterday.

The scientists say we need to reduce CO2 emissions by 50 percent in the 2020s to avoid a very challenging set of changes in our climate.

It is important to understand that climate change is on a spectrum. It is a scale, say from 1 to 15. If we swing into action right now globally, we could keep it to a 1 or 2. If we go on fiendishly burning fossil fuels for a while, we’ll go to a 4 or 5. If we just don’t give a shit and really want to burn that coal and drive internal combustion engines for a couple more decades, we’ll go to 7 or 8. And if we just blow off the whole thing we go to 10 or 15 on the scale.

People are always saying we’ve passed the point of no return. On a scale, there really isn’t such a thing. The only question is how high on the scale do you want to go. At any point in the next 30 years we could get really serious and make a big difference in the shape of our future.

But, our children and grandchildren won’t like the world we are currently building for them.

So what does the new report say?

The global average surface temperature in 2000-2021 is about 1 degree C. (1.8 degrees F.) higher than the 1850-1900 average. Although a 1.8 degrees F. increase doesn’t sound like much, remember that this is an average, and that the oceans and the poles are very cold, so that some places, like the U.S. West or the Iranian coast along the Gulf, are much hotter than they used to be, and on their way to being hotter yet.

Even more alarming, some of the heating we have created is being masked by our coal and wood burning, which puts aerosol particles into the atmosphere that reflect sunlight and so have a cooling effect. That smog cooling, however, is temporary, and will go away as we stop burning coal and other fuels, and then the full heat we’ve provoked will hit us in the faces all of a sudden.

Humans have almost certainly caused each of the last four decades to be hotter than its predecessor. We have caused precipitation (and flooding as this year in Germany) to increase. We have sent the glaciers into retreat and cause an accelerated melting of Greenland’s ice sheet.

We have warmed up the upper ocean, and made it much more acidic, both with the potential to kill a great deal of marine life on which we depend.

We have caused the seas to rise on average nearly 8 inches during the past century. That may not sound like much, but it is only the beginning, and the rise could be 4 to 6 feet by the end of this century. That would polish off Miami and New Orleans.

We’ve raised the parts per million of carbon dioxide in the atmosphere from 270 in 1750 to over 410 now. The last time the earth saw 410 ppm of CO2 was 2 million years ago, when the whole world was tropical and there was no surface ice. If we stop producing so much carbon dioxide, the oceans will absorb a lot of what we have put up there, but around 2050 the oceans will be full and if we go on burning fossil fuels past a certain date, all the CO2 will stay up there for tens of thousands of years and the whole world will become tropical and there will be no surface ice.

The scientists use that “certain” word again when they say that since 1950 heat waves have become more intense and more frequent because we burned coal, gasoline and natural gas.

Hurricanes and cyclones have increased in intensity in the past forty years, though whether they will become more frequent is hard to know.

We are also making the climate more complicated. They write, “Human influence has likely increased the chance of compound extreme events since the 1950s. This includes increases in the frequency of concurrent heatwaves and droughts on the global scale (high confidence); fire weather in some regions of all inhabited continents (medium confidence); and compound flooding in some locations (medium confidence).”

We don’t just have a heatwave here and a drought there any more– we have them both together, and along with wildfires, too.

The scientists conclude that the hotter we make the earth, the more extreme the climate gets. Even just an extra degree Fahrenheit can push those extremes:

These extremes won’t be smoothly distributed. The Arctic and the South American monsoon region will heat up 2-3 times more than other places.

Me, I vote for green candidates, put solar panels on my roof, and leased an electric car for a while before just biking to work in the good weather. We can keep this thing low on the scale, still. If we all act together now.