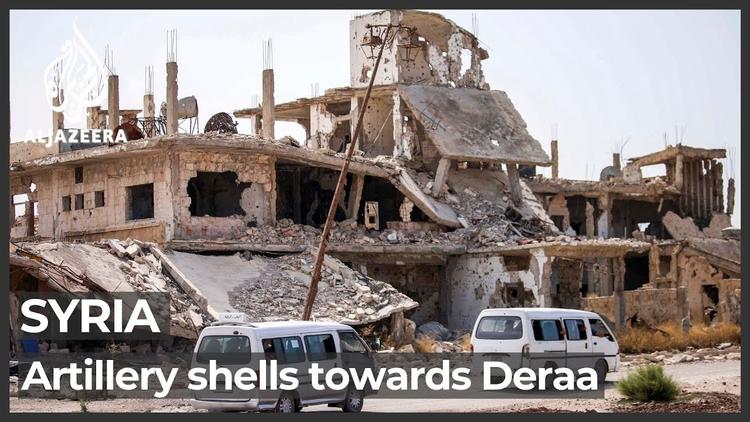 Belgrade (Special to Informed Comment) – Russia is making an effort to prevent wide-scale hostilities in Syria’s southern province of Deraa. The Kremlin reportedly aims to increase its influence in the war-torn country, but recent clashes in Deraa al-Balad – a southern district of Deraa city – between the Moscow-backed Syrian Arab Army (SAA) and former rebels threaten to undermine the so-called reconciliation process in the south of Syria.

According to government sources, the former opposition that controlled Deraa until 2018 attacked Syrian military at the end of July and captured at least 25 troops. In 2018, the Russia-backed Syrian Arab Army (SAA) had taken control of the governorate, striking a symbolic blow to the uprising born there in 2011. As a result of the militia strike, the Syrian Arab Army blocked off the area and called on the militants to surrender and raise the Syrian flag over the Al-Omari Mosque in the town of Bosra near the country’s border with Jordan. Reports suggest that Russian attempts to establish a ceasefire failed, and the SAA forces started shelling Deraa al-Balad.

It is worth noting that fierce clashes broke out just days after Russian Deputy Prime Minister Yuri Borisov met with Syrian President Bashar al-Assad in Damascus. However, incidents in the south of Syria started occurring a couple of years ago. For instance, there were reports suggesting that an explosive device detonated on the route of a convoy of the Russian military police in Deraa province in November 2020. Also, another explosion hit Deraa this year on May 26, which is when Syria held controversial presidential election. Ever since, situation in the Deraa governorate has been very tense.

From the Kremlin’s perspective, Deraa remains an area of secondary importance for the Russian military operating in the Middle Eastern country. One of Moscow’s primary goals in Syria is to modernize the northeastern port of Tartus, which is Russia’s only door opened to the Mediterranean. It is believed, however, that one of Russia’s priorities in southern Syria is to limit the Iranian influence, and at the same time to find a solution to the growing outbreaks of protest.

Back in June it became obvious that situation in Deraa is critical and that local economy is on the verge of collapse.

Damascus, on the other hand, appears to see the situation in the south from the purely political perspective, and keeps using the old repressive tools.

“The efforts of the armed forces of the Syrian Arab Republic have stabilized the situation in Deraa”, said Counter Admiral Vadim Kulit, deputy chief of the Russian Center for Reconciliation of the Opposing Parties in Syria.

But economic circumstances in the region are unlikely to improve any time soon, which means that tensions in the “birthplace of the Syrian revolution” are expected to grow. There are even fears that full-scale hostilities in Deraa will eventually resume.

Unlike most other Syrian regions that were recaptured by the Syrian Arab Army in 2018, and where anti-government fighters mostly have been evacuated to the northern Idlib Province, in Daara, under a Russia-brokered deal, they were allowed to stay and take part in the “reconciliation process”. According to the deal, they had to hand over heavy weaponry to the SAA, but not small arms. Moreover, the Russians and the former rebels agreed that all detainees must be released, oppositionists and dissidents could freely return to their homes, and young people would not be conscripted into SAA units fighting in Idlib.

However, on June 24, Syrian government forces began to impose their siege on the neighborhoods of Deraa al-Balad after the residents reportedly refused to hand over small individual weapons and automatic machine guns to the SAA and the Russian military police. It is worth remembering that in June 2020 the Russian military opened a center in Deraa, allegedly in order to receive information from the locals about their relatives who are being held detained by the Syrian authorities. Still, some locals are skeptical regarding the Russian ambitions in the province.

“The Russian military received lists of detainees two years ago, but nothing has changed, and the opening of the center is just an excuse to increase the Russian presence in the region, says local lawyer Adnan Masalmeh.

Colonel Fateh Hasun, one of the commanders of the Syrian opposition, reportedly told the Russian newspaper Kommersant that Moscow failed to fulfill its obligations to the people of Deraa.

“This is not a deception, but simply a Russian retreat before the regime and Iran. Let this serve as a warning to those who consider Russia a guarantor of the peace process”, said Hasun.

The Kremlin, for its part, opposed the SAA operation in Deraa, but Damascus conducted it nevertheless, although an influential Russian military officer, Alexander Zorin, reportedly warned Syrian authorities that Moscow would not provide air support to the Syrian army in case of a large-scale offensive in the former opposition stronghold.

Given that Deraa has largely boycotted the recent presidential election, the Assad government sees the former rebels as “terrorists who thwarted a reconciliation deal”. Thus, it is entirely possible that, sooner or later, the SAA will attempt to crush the opposition forces in the south once and for all, with or without Russian help.