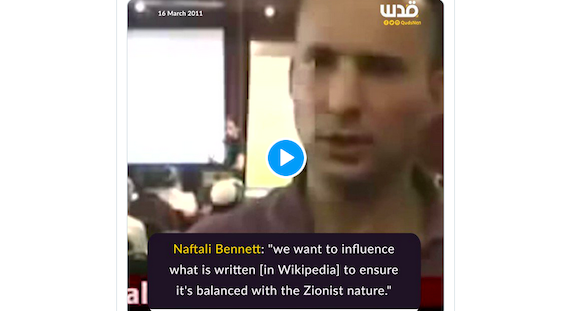 The video shows Bennett helping to lead a training session teaching Israelis how to insert themselves into Wikipedia (the free online encyclopaedia that unknown persons can edit), and push the Israeli government line.

“The goal of the day is to teach people how to edit in Wikipedia, which is the number one source of information today, in the world,” he explained.

“As a way of example: if someone searches the Gaza flotilla, we want to be there. We want to be the guys who influence what is written there, how it’s written, and to ensure that it’s balanced and Zionist in nature.”

Watch | Israeli occupation Prime Minister Naftali Bennett "we want to influence what is written in Wikipedia to ensure it's balanced with the Zionist nature."#FreePalestine pic.twitter.com/03mLENGDWB

The concept of something being both “balanced and Zionist in nature” is an interesting one. Or rather, it is a total contradiction in terms – much like the idea of a “Jewish and democratic” state.

If the Zionist perspective was so obviously the correct and “balanced” one, then why does it need a small army of state-backed foreign operatives deceptively inserting itself into online debates?

The flotillas to Gaza, of course, were a series of non-violent popular resistance activities that activists from around the world held around that time.

They were attempts to break the brutal siege on the Gaza Strip, which Israel has enforced since 2007. Activists met with some degree of success – before the Mavi Marmara massacre in 2010.

That year, not long before Bennett spoke in the video above, the largest flotilla to date was hijacked by Israeli troops in international waters. This resulted in the deaths of ten Turkish activists; nine were immediately murdered, some “execution-style” according to witnesses, with the tenth dying of his wounds some years later.

Israel was unapologetic, insisting on its supposed right to “defend” itself from the unarmed solidarity activists and their symbolic cargos of siege-busting aid.

But as a result, Israel suffered in the court of world opinion. A wave of boycotts followed, with several high-profile music acts declaring that they would never play in the country. The Boycott, Divestment and Sanctions Movement (BDS) got a huge boost.

No wonder Bennett and his minions decided that something must be done about the worldwide battle for the narrative that Israel was losing to the Palestinians – by subverting Wikipedia.

In the decade since, Israel’s standing in the court of world opinion has only declined.

Israel has degraded itself, time and time again, by repeated massacres of Palestinians all over Palestine – especially in the Gaza Strip – and by the slow grind of occupation and expulsion of Palestinians from their homes in the West Bank, to be replaced by Israeli settlers.

Israel has almost given up trying to convince anyone else it is in the right. On a certain level, the country’s leaders know that battle was lost a long time ago. Instead, they resort to lobbying efforts aimed at banning, outlawing, or at least chilling and suppressing, criticisms of Israel and its official racist ideology: Zionism.

Last year, former Israeli Prime Minister Benjamin Netanyahu boasted of having “promoted laws in most US states” that ban or otherwise inhibit the BDS Movement’s activities.

Of course, Netanyahu did not mention that these laws are all blatantly unconstitutional and are likely to be swept away. Every time these laws are challenged in higher courts, they are struck down as violations of the First Amendment to the US Constitution: the right to free speech.

It is with Bennett’s decade-old video in mind that I read this week about his visit to the US as Israeli prime minister.

Bennett is a hard-right, violent, anti-Palestinian racist. In other words, he is like every other Israeli leader before him. But Israel seems to have perfected the knack of every single succeeding prime minister being more racist and right-wing than the last.

Soon after embarking on his political career, Bennett infamously declared: “I have killed lots of Arabs in my life – and there is no problem with that.”

For once, he was partly speaking the truth. As a young officer in the occupying army, Bennett personally participated in Israel’s April 1996 massacre of more than 100 civilians sheltering at a United Nations peacekeeper base in Qana, Lebanon.

Despite all of this – or perhaps rather because of it – Bennett can be assured of a warm welcome in Washington DC during his meeting with US President Joe Biden.

The US empire, after all, has never shied away from killing indigenous peoples.