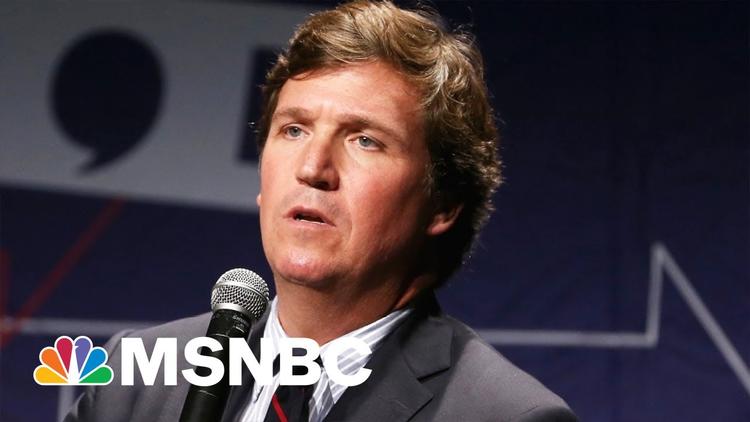 It reminded me a little of when Stephen Colbert went to New Zealand and hung out with Prime Minister Jacinda Arden, except that both Colbert and Arden are very nice people (Colbert had me on his old “Colbert Report” once and couldn’t have been sweeter out of character) and both are democrats with a small “d.”

In the Superman comics there is the bizarro world, where everything is inverted and the motto is “Us do opposite of all Earthly things! Us hate beauty! Us love ugliness! Is big crime to make anything perfect on Bizarro World!”

Carlson is like the Bizarro World version of Colbert and Hungarian Prime Minister Viktor Orban is the fascist version of Arden.

Carlson has perfected the lie-a-minute style of news commentary, and in the same breath maligned America and misrepresented Hungary. He said that if you lived in a large US city and publicly attacked Joe Biden’s policies, you would be “silenced” by Silicon Valley and would end up needing armed body guards. I think he may have meant that if you called for violence against Biden supporters you would be treated that way. Carlson, like many fascists, considers constraints on Brown Shirt violence to be themselves a form of authoritarianism.

Then he said of Orban’s rule of terror,

“Opposition figures here don’t worry that they will be hurt for their opinions, neither by the way does the Prime Minister. Orban regularly drives himself with no security. So who is freer? In what country are you more likely to lose your job for disagreeing with the ruling class’s orthodoxy? The answer is pretty obvious, though. If you’re an American, it is painful to admit it as we have discovered.”

Carlson’s junket is a further sign that his big money backers in the US are plotting the overthrow of the US constitution and bill of rights. Holding out a virtual dictator such as Orban as a model can only have the implication that you want done in the US what he did in Hungary. Most Americans, and particularly Fox viewers, won’t know anything about Orban’s actual, wretched record– partly because American corporate television news doesn’t tell them anything about the real world.

Apparently some white multi-millionaires and billionaires in the US have decided that if the country is going to be multi-cultural, they can’t afford democracy. White dictatorship is the only course of action left to them. Hence their pressure on state Republican parties to pass voter suppression laws targeting workers, the poor and minorities– a sort of soft Jim Crow.

Orban made his bones with anti-immigrant policies and Islamophobia in Hungary, which now will accept no asylum-seekers. Tucker was clearly filled with man-love for Orban as a result.

And here are some of the rest of Orban’s violations of basic human rights that Carlson would like to see Americans imitate, including flaming anti-Semitism and destruction of freedom of the press — the sort of thing that led President Biden to dismiss him as “a thug.”

Human Rights Watch reviewed the fascist rule of Viktor Orban in Hungary during 2020.

In March, 2020, Orban got parliament to pass an emergency decree allowing him to rule absolutely and with no parliamentary oversight. That is called dictatorship.

The law also destroyed what little was left of Hungarian press freedom, criminalizing criticism of Orban’s handling of the pandemic.

During the following three months, Orban issued hundreds of decrees, which took on the force of law. Again, dictatorship.

Some of them stripped certain funding from the 10 cities where the political opposition came to power in 2019 elections. It would be like Joe Biden denying federal funds to cities that voted Republican in 2020, just because they did.

As in Israel, where former prime minister Binyamin Netanyahu’s crony Sheldon Adelson created a free newspaper just to do propaganda for him, so in Hungary Orban’s wealthy cronies have made sure no independent voices can criticize the prime minister.

“In July [2020], Szabolcs Dull, the editor-in-chief of the largest online independent daily, Index, was fired as a result of a financial takeover of the company controlling Index’s revenue streams. The new owner has close links to Prime Minister Viktor Orban and his government. Index’s entire staff resigned in protest.”

“In September, the Media Council, a regulatory body the members of which are appointed by the ruling party, revoked the frequency for Klubradio, an independent radio station in Budapest, entering into effect in February 2021.”

That would be like Biden closing down Fox Cable news for reporting inaccurately on him.

Orban so hates independent, critical thinking that he kicked the Central European University out of the country. The Court of Justice of the European Union rebuked him, saying he did not have that authority.

Orban’s law targeting LGBTQ people is viewed as such a serious interference in the basic rights of Hungarian citizens that Reuters reports that the European Union Commission is withholding Covid relief funding to Hungary over it.

One reason Orban hates the Central European University is that it was founded by George Soros, who is Jewish. Orban loves using an anti-Semitic dog whistle, saying at one point according to Erna Paris at the Toronto Globe and Mail, “They do not fight directly, but by stealth; they are not honourable, but unprincipled; they are not national, but international; they do not believe in work, but speculate with money; they have no homeland, but feel that the whole world is theirs. They are not generous, but vengeful, and always attack the heart – especially if it is red, white and green [the colours of the Hungarian flag].” Paris wondered in the article if Hungarian Jews should pack their bags.

MSNBC: “The Truth Behind Tucker Carlson’s Disturbing Trip To Hungary”