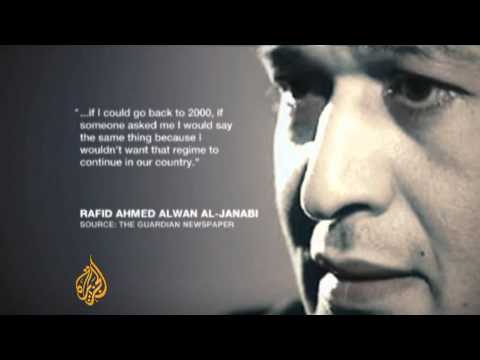 Ann Arbor (Informed Comment) – Kyle Swenson at the Washington Post reported in 2018 that Floridian Ishnar Lopez-Ramos was in love, but her intended only had eyes for another woman. So Ms. Lopez-Ramos enlisted two 22-year-old accomplices to target the other woman, who worked at the Ross Dress for Less at a shopping Center near Kissimee. They observed a woman fitting the description of Lopez-Ramos’s rival leaving the store. They kidnapped her and zip-tied her. Then they met Lopez-Ramos, who saw that they had grabbed the wrong woman. She had seen them, though, so they strangled her with garbage bag over her head, and dumped her body near Ormond Beach. The three, Glorianmarie Quinones Montes, Alexis Ramos-Rivera, and Ishnar Lopez-Ramos, face murder charges but the state attorney will not seek the death penalty.

George Walker Bush, Richard Bruce Cheney, Donald Henry Rumsfeld, Paul Dundes Wolfowitz and others in the coterie of capitalist colonialists that was the Bush administration, aren’t any different from Glorianmarie Quinones Montes, Alexis Ramos-Rivera, and Ishnar Lopez-Ramos. That is why I give all three of their names, which is how journalists report about criminals. They murdered Iraq, blaming Baghdad for September 11 even though they knew that Iraq was not the culprit. The difference between them and the misguided love-triangle mob was that the latter whacked one poor, innocent victim whereas the Bush administration set in train events that would leave hundreds of thousands dead, millions displaced, and a country in ruins.

The Bush crew desecrated the graves of the September 11 victims by using them pettily as a pretext to have the war that they had long wanted to have. Remembering the victims without remembering the further victims created in their supposed name is hypocrisy.

As the Nuremberg Tribunal said, “To initiate a war of aggression is not only an international crime; it is the supreme international crime, differing only from other war crimes in that it contains within itself the accumulated evil of the whole.”

In 2003-2008, 4 million Iraqis were displaced and made homeless in a country of 26 million, 1.5 million of them overseas. Something on the order of 200,000 Iraqi civilians were killed in the maelstrom unleashed by Bush. This is certainly an under-estimate. We’re still upset about someone killing our 3,000 compatriots on 9/11, and rightly so. Imagine if someone had taken out 200,000 Americans? Given the disparity in population, that Iraqi death toll would equal 1.8 million Americans dead.

The number of Iraqi dead is certainly higher if you include everyone who died that would not otherwise have died if Bush had not invaded. Most of those killed were parents, so you create a whole class of Bush orphans in Iraq.

Ultimately, of course, against the backdrop of the Bush invasion and military occupation of Iraq (that is the correct diction, my beloved journalist colleagues), the ISIL terrorist group grew up and threw the eastern part of the Middle East into enormous turmoil for years, causing the US to drop more thousands of bombs on Iraq and displace millions more.

Paul Wolfowitz came into office obsessed with Saddam, according to Richard Clarke, the counter-terrorism tsar. Wolfowitz complained in spring, 2002, about Clarke being fixated on Bin Laden and al-Qaeda. Why are you worrying about one little guy, he is said to have asked. What about Iraqi terrorism against America? (Not sure what he was talking about.) After 9/11, Bush ordered Clarke to find out if Iraq was behind it. He might have noted that none of the hijackers was Iraqi. Wolfowitz told Bush without any evidence at all that there was a 50% chance that Saddam did it. Bush wanted to launch a war immediately on Iraq according to the then British ambassador. Tony Blair, afraid that Bush would leave al-Qaeda’s training camps alone in Afghanistan and so endanger London, argued him into hitting Afghanistan first. He pledged British support for an Iraq War down the line. What was this, a hostage situation? Why was Iraq even in question? Blair later alleged that Iraq could attack Europe with chemical weapons within just 45 minutes. No one could understand what he was on about. The allegation did not even make any sense, and was not true. He later admitted to having misunderstood an intelligence briefing. I mean, this is like an old Peter Sellers comedy of errors, only it isn’t funny, at all.

The Baath government of Saddam Hussein in Iraq was not in any way, shape or form behind the September 11 attacks. Even I, as a civilian Middle East specialist, could see that. The money for the September 11 attacks was wired by Mustafa al-Hasawi, the al-Qaeda paymaster from accounts he set up in Dubai in the United Arab Emirates to the United States. Other money was sent to lead hijacker Mohammed Amir Atta in Florida from Pakistan. This was well known and had come out in the press in the months after the attacks. There was no Iraq connection to these funds. There was no Iraq connection period.

Fox Cable Lies ran segments nearly nightly from the fall of 2002 through the U.S. invasion alleging that al-Qaeda operatives had been trained at a special camp at Salman Pak in Iraq. A transparent lie, and its falsity was later admitted by US intelligence The Baath government of Iraq was secular and nationalist and hated and feared al-Qaeda.

When Iraqi government documents were released on the web at a site at Ft. Leavenworth, I saw with my own eyes an Iraqi secret police all-points bulletin warning that Abu Musab al-Zarqawi, a Jordanian associate of “the Saudi terrorist Ussama Bin Laden” was in Iraq and ordering his arrest. It suggested shaking down the expatriate Jordanian community. As Joshua Kameel notes, “Postwar intelligence revealed, however, that Saddam had fervently tried to locate and dismantle the terrorist organization, as he viewed it as a threat to his regime.”

The Saddam Hussein government was petrified of Zarqawi and of Bin Laden. Colin Powell and other Bush administration officials told fairy tales at the U.N. about Saddam Hussein hosting al-Zarqawi. It was all lies. Some of this so-called “intelligence” was produced by waterboarding people at Gitmo, who after a while told their torturers anything they wanted to hear. And Cheney wanted to hear that Iraq was behind 9/11. Other such reports came from Iraqi expatriates who hoped the US would attack Iraq and make them billionaires (they got their wish). This garbage raw intelligence was wrapped up as analysis by beleaguered CIA analysts, a quarter of whom later reported receiving direct pressure from the Bush administration to reach that conclusion. In the intelligence world, analysts who give in to such pressure and write what the higher-ups want to hear are called “weasels.” Others were just rushed. I later heard one of the CIA analysts in charge of producing the report Cheney demanded be written without delay observe, “If you want it bad, that’s how you get it.” He was speaking over at the State Department. Douglas Feith, the number three man at the Pentagon and more or less an Israeli West Bank squatter-settler, set up a shop, the Office of Strategic Plans, that cherry-picked raw intelligence and briefed the resulting pile of bullshit to government officials, which was irregular if not illegal.

Maybe Ishnar Lopez-Ramos apologized to the judge for her mindless murder. She lost her liberty, perhaps for the rest of her life. She received punishment. Her victim was mourned by her children and husband. Society recognized that a great wrong had been done.

Bush and his gang remain unpunished. Society does not hold them in contempt. The mass murderers sit on genteel corporate boards. Iraq is forgotten, never mentioned in the daily news, with the masses being given bread and circuses instead. The great American amnesia about our own miLitarism and colonial misadventures is forgotten or denied.

The victims of September 11 lie defiled, made an excuse for a brutal war of choice that contained within it the accumulated evil of all war crimes.