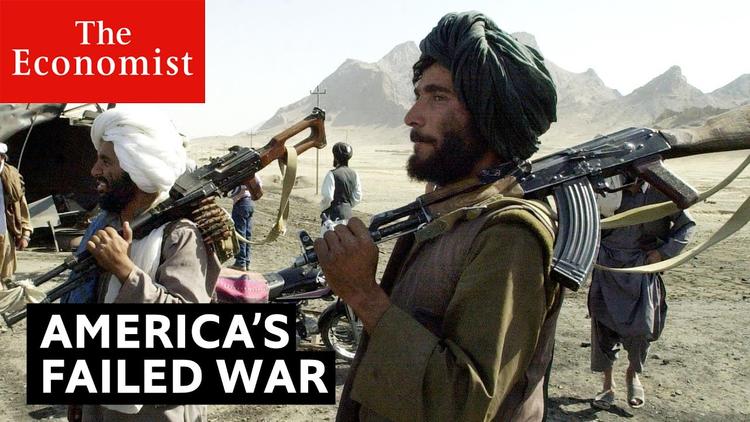 Southwest Harbor, Maine (Special to Informed Comment) – Victory always seems to be just around the corner or at the end of the tunnel, until it isn’t. With the humiliation of defeat compounded by the difficulties extricating US personnel, second guessing is well underway and will likely last for years. The corruption of the government in Kabul is a favorite explanation, though the US role in installing that government is downplayed. But perhaps the most glaring omission from the post-war discussions is the role of air power, especially aerial bombardment in war. The last time the US won a war it commissioned an independent inquiry into the role of air power in victory over the Germans. The surprising conclusion, as summarized by commission head John Kenneth Galbraith:

“The bombing of Germany, both by the British and ourselves [America], had far less effect than was thought. The German arms industry continued to expand its output until autumn 1944, despite the heaviest air attacks. Some of the best-publicised attacks, including those on ball-bearing plants, practically grounded the 8th Air Force for months. Its losses were that heavy. At the end of the war, the Germans had ball bearings for export again. Our attacks on their airplane plant were a failure. In the months after the spring raids of 1944, their production increased.”

The commission’s explanations, though not directly relevant to the Afghanistan war, do suggest lines of inquiry that should be pursued. Galbraith wrote that the “reasons were threefold. First, the machine tools were relatively invulnerable. They’d be buried under rubble but could be dug out in a day or two. Second, it was possible to decentralise production: to move the machinery into schools and churches. It was reorganised in much less time than was imagined. The Germans discovered that it wasn’t necessary for production to be in a single factory. They also discovered that it was possible to redesign a lot of equipment to reduce the use of ball bearings. Third, it was possible to reorganise what had been sporadic and less than diligent managements.”

…There had been two broad strategies. The British bombed at night and went for the central cities, because that was all they could find….

American strategy involved daylight raids; we aimed for the plants themselves. The problem was targeting. In a large number of cases, we couldn’t hit them. There was a saying in 1945: we conducted a major onslaught on German agriculture.

We have here some possible convergences. Weapons in caves can be relatively invulnerable and training and command structures decentralized. And as with all fighting forces missing the target was an inevitable part of the enterprise.

There are more compelling reasons to oppose such massive bombardment campaigns but failures of such magnitude across frames of era and ideology leads one to ask what factors did motivate these continuing campaigns.

“All the wartime bombing, accidents apart, being on the far side of enemy lines, knowledge of the destruction depended on the reports of those in the bombers or later aerial reconnaissance. Neither source was given to understatement; [emphasis mine] neither air crew nor photographs minimized the admittedly ghastly consequences. Out of the several proposals in November, 1944, came the United States Strategic Bombing Survey. It was to be independent of the Air Force, although advised and supported by it, and independent and accurate in its findings. Accuracy to many of the Air Force generals had a somewhat specialized connotation; it meant establishing with some clarity that the bombers won the war.”

“During the years of intense fighting in Afghanistan, the United States dropped a handful of similar bombs to destroy caves believed to be used by the Taliban and Al Qaeda, as well as to frighten troops dug into trenches who were not immediately killed. The military offered a similar rationale on Thursday for using the bomb — a successor to the ‘daisy cutter,’ a heavy bomb designed for the instant clearing of large sections of jungle in Vietnam.”

Islamic State fighters in Afghanistan “are using I.E.D.s, bunkers and tunnels to thicken their defense,” said Gen. John W. Nicholson Jr., the United States commander there, referring to improvised explosive devices. “This is the right munition to reduce these obstacles and maintain the momentum of our offensive.”

So here we have it. The mother of all non-nuclear bombs versus the home made IED.

In a pattern to be followed throughout the war the mother of all bombs continued to evoke anguished criticism.

“While the damage from the bombing, which occurred at night in a remote area, was unclear, the strike quickly brought backlash. Hamid Karzai, Afghanistan’s former president, was among those who condemned it.

‘This is not the war on terror but the inhuman and most brutal misuse of our country as testing ground for new and dangerous weapons,” Mr. Karzai wrote on Twitter. ‘It is upon us, Afghans, to stop the USA.'”

Blowback and the IED

The US has been in a two decade war because previous efforts to dominate the Middle East not only have failed, they have been counterproductive .

The Taliban, armed by the US under President Carter to drive the Soviets out of Afghanistan,

The Muslim fundamentalist fighters of Afghanistan against the Soviet Union were originally known as Mujahidin. Some later joined the new movement of the Taliban that incubated among Pushtun refugees in the seminaries of northern Pakistan. Backed initially with a small investment by the Carter administration, the Mujahidin came to receive as much as $5 billion in a year from the Reagan administration, with matching funds from Saudi Arabia. They developed the skills and the firepower to turn on their benefactors, whose presence as of 2001 in their holy land was deemed blasphemy. In Iraq itself, US imperialism also unleashed its own demonic response. Its often stated goal is to extirpate the terrorism and extremism to which it has contributed so mightily by bombing suspected ISIS sites in Iraq and Syria. Yet as Phyllis Bennis of the Institute For Policy Studies points out, you cannot bomb extremism. Bombing these selected targets inevitably kills civilians and becomes a tool to recruit further extremists. This pattern has continued throughout the 21st century wars of the U.S.

Though blowback has been written all over the rise of ISIS, less attention even in the Left press has been devoted to another factor in the United States’ long and agonizing retreat/defeat in this region. That is the role of the humble IED, improvised explosive device. Seldom is mention made of Pentagon efforts to defeat/prevent the use of these devices. University of Hawaii International Relations theorist Jairus Grove, author of Savage Ecology: War and Geopolitics at the End of the World, points out that the Pentagon spent 26 billion dollars over a six year period to achieve its goals only to see attacks increase from about 800 to over 15,000 between 2006 and 2012. IEDs accounted for two thirds of all soldiers wounded and killed in the Iraq and Afghanistan wars.

In dollar terms, the legacy of the IED is even more pronounced. The US has spend over $16,000 to defeat the IED for every dollar the insurgency has spent.

Distant cousins to the defensive land mines of the earlier world wars, these devices are far more. They have totally disrupted the major arteries on which the modern US army depends for its imperial adventure.

IEDs have received far less academic scrutiny than other weapons of war, such as nuclear armament and chemical weapons. Nuclear’s capacity to destroy civilization and the pall it cast over an entire era obviously justify the attention it receives, but in more subtle ways IEDs have reshaped not only Iraq and Afghanistan but war as well. There are at least three reasons for this paucity of scholarship. Traditional scholarship looks at the weapons of war as following a fairly predictable course. The most powerful and technologically advanced societies develop new weapons first, with their presence and demand for them then moving outward to lesser powers and wannabees. In addition, IEDs have no famous scientific parent and no path breaking scientific theory upon which their development rests. Finally, they are hard to define. They are not reducible to any one component or even to one particular whole. Citing another scholar, Grove points out that as with a coral reef, which can be composed of coral but could instead be composed of dead tires, no single totality defines it. Yet both teem with life and we can tell the difference between a reef and a parking lot.

J. Grove argues convincingly that the IED is revelatory of modern life. It is an event, one that never stands still. IEDs “are the weaponization of the throbbing refuse, commerce, surplus, violence, rage, instant communication, population density, and accelerating innovation of contemporary global life.”

The larger context in which this event has emerged is war itself. Grove observes, “War has always been an assemblage of things in which any particular human being played only a linkage or fulcrum of a larger, more heterogenous orders.” Artisans and tinkerers are not the only factor keeping the constant evolution of the IED alive. “It is the stubborn perdurance of high tech and manufactured waste dumping that provide the near limitless flow of materials from place to place. The protocols of production, waste disposal, and consumption habits– that are never entirely human—generate the exteriorization waste from the centers of cutting edge commerce to the periphery.” (700 million new computers will be manufactured this year, up from 183 million just five years ago. )

Ironically the US, with overweening confidence in its technological mastery of the social and nonhuman world, for years refused to sign a land mine treaty. But as the tables turned it then endorsed such treaties, but characteristically remained blind to the ability of the mine to evolved in unpredictable ways.

Galbraith was right. This entire saga exposes the consequence of elites’ consistent overstatement of their own power and ability to control nature. They repudiate ecological perspectives on the world. Ecology appreciates, in Groves’s words, “ creativity and participation at multiple levels of complexity and organization, species, populations, individual organisms, and assemblages of living and non-living things…To this end ecological relations are characterized by shifting stability, creativity, and variable involvement from top to bottom, cosmos to microorganism.”

An account that treats the IED as itself a complex evolving species deeply intertwined with social, economic, and nonhuman forces and agents exposes the arrogant faith in technology of the military planner and of much of contemporary economic thought. It is little wonder the IED has proven to be the most painful blowback from our most recent imperial venture.

From last year: Afghanistan: why the Taliban can’t be defeated | The Economist