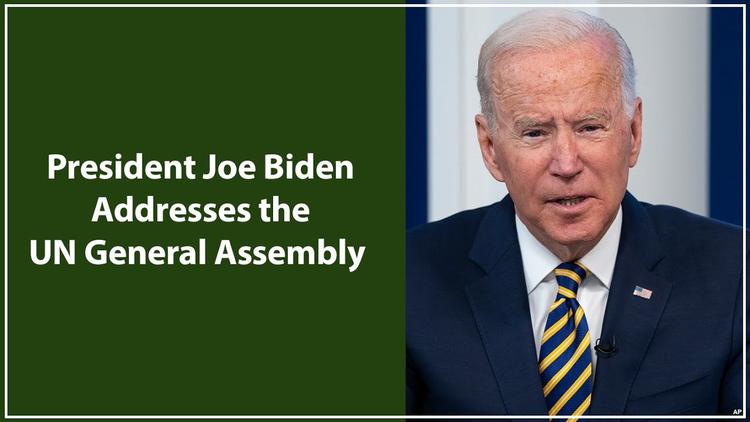 Ann Arbor (Informed Comment) – President Joe Biden addressed the 76th Session of the United Nations General Assembly on Tuesday, laying out his vision of the global challenges facing the United States and the world.

Biden, as expected, used his speech to announce a pivot by the United States away from its 20-year “war on terror,” of which the wars on Afghanistan and Iraq were centerpieces.

He said of the latter,

“We’ve ended 20 years of conflict in Afghanistan. And as we close this period of relentless war, we’re opening a new era of relentless diplomacy; of using the power of our development aid to invest in new ways of lifting people up around the world; of renewing and defending democracy . . .”

The U.S. wars of the twenty-first century had a split personality. Afghanistan was a multilateral venture, authorized by Article 5 of the North Atlantic Treaty Organization, which declares that an attack on one is an attack on all.

Iraq was a largely unilateral intervention by the Bush administration, with Britain as the initial battlefield ally and Spain and others coming in after the Baathist government was overthrown as a token “alliance of the willing.”

Although George W. Bush is now attempting to fashion himself as the anti-Trump by attacking domestic white supremacism, in international affairs he pioneered the sort of dismissal of the concerns of allies for which Trump became notorious. France and Germany told him not to attack Iraq, and Jacques Chirac of France warned him not to treat a criminal act like the September 11 attacks as a pretext for a new sort of war– it should, he said, be dealt with as a crime.

In Biden’s vision of the American future, multilateral cooperation comes back to the fore. The threat of terrorism is seen as much diminished and as susceptible of being combated by the counter-terrorism tools the US and allies have developed over the past two decades.

Diplomacy (“relentless diplomacy”) will also be harnessed to addressing the current wars:

“We cannot give up on solving raging civil conflicts, including in Ethiopia and Yemen, where fighting between war- –warring parties is driving famine, horrori- — horrific violence, human rights violations against civilians, including the unconscionable use of rape as a weapon of war.”

He even tepidly said some things about a Palestinian state.

In Biden’s view, in the second quarter of the 21st century, the primary new threats are the COVID-19 pandemic and the climate emergency, neither of which can be taken on successfully without intense global cooperation. Biden dedicated the America of this decade to that collaborative enterprise.

With regard to the pandemic, Biden said,

Planes carrying vaccines from the United States have already landed in 100 countries, bringing people all over the world a little “dose of hope,” as one American nurse termed it to me. A “dose of hope,” direct from the American people — and, importantly, no strings attached.”

That is, Biden has so far pledged 630 million vaccine doses. It is not nearly enough as Jody Heymann and Timothy Brewer, argue, but it a step in the right direction.

As for the climate emergency, Biden touted his green energy plans (which have yet to clear Congress):

“In April, I announced the United States’ ambitious new goal under the Paris Agreement to reduce greenhouse gas emissions from the United States by 50 to 52 percent below 2005 levels by 2030, as we work toward achieving a clean-energy economy with net-zero emissions by 2050.”

Biden underlined that fighting the climate emergency should be seen as a jobs and technology opportunity:

“Making these ambitious investments isn’t just good climate policy, it’s a chance for each of our countries to invest in ourselves and our own future. It’s an enormous opportunity to create good-paying jobs for workers in each of our countries and to spur long-term economic growth that will improve the quality of life for all of our people.

We also have to support the countries and people that will be hit hardest and that have the fewest resources to help them adapt.

In April, I announced the United States will double our public international financing to help developing nations tackle the climate crisis. And today, I’m proud to announce that we’ll work with the Congress to double that number again, including for adaptation efforts.

This will make the United States a leader in public climate finance. And with our added support, together with increased private capital and other — from other donors, we’ll be able to meet the goal of mobilizing $100 billion to support climate action in developing nations.”

Adaptation to rising sea levels, drought, wildfires and superstorms is an especially daunting task in the global South, where countries often have few resources to spare. This money, pledged by Biden, will be money well spent.

As for new technologies and international trade, Biden stressed the need for jobs and worker protections:

“We will strive to ensure that basic labor rights, environmental safeguards, and intellectual property are protected and that the benefits of globalization are shared broadly throughout all our societies.

We’ll continue to uphold the longstanding rules and norms that have formed the guardrails of international engagement for decades that have been essential to the development of nations around the world — bedrock commitments like freedom of navigation, adherence to international laws and treaties, support for arms control measures that reduce the res- — the risk and enhance transparency.”

Biden, like Bush and Obama (but unlike Trump) spoke of democracy promotion and supporting people who came into the streets against authoritarianism. He mentioned Sudan in specific, where a popular revolution overthrew the al-Bashir fundamentalist military dictatorship:

“The truth is: The democratic world is everywhere. It lives in the anti-corruption activists, the human rights defenders, the journalists, the peace protestors on the frontlines of this struggle in Belarus, Burma, Syria, Cuba, Venezuela, and everywhere in between.

It lives in the brave women of Sudan who withstood violence and oppression to push a genocidal dictator from power and who keep working every day to defend their democratic progress.”

But he also mentioned Venezuela and Cuba, which don’t seem very much like Sudan, and Syria, where the US made things much worse by throwing money to fundamentalist rebels.

Although Biden went out of his way to say he is not seeking a new Cold War, China lurked, unmentioned, behind much of his speech.

He spoke of a pivot to the Indo-Pacific. That is to block China.

He denounced piracy of intellectual property. That was a slam against China.

He denounced cyber-attacks, something the US believes China has been involved in.

He praised the US, Australia, Japan and India Quadrangle, which is aimed at blocking China.

Even his lauding of protesters against authoritarianism hinted at the pro-democracy rallies in Hong Kong (now quashed).

The problem with the latent Cold War against China that Biden clearly did outline, despite his denials, is that the really big challenge of the climate emergency cannot be addressed without close cooperation between Washington and Beijing. Moreover, his European allies do not see China as the sort of threat that Washington does. Biden wants a multilateral world solving global crises but also wants to adopt a robust posture toward China, and that contradiction threatens the success of his vision.