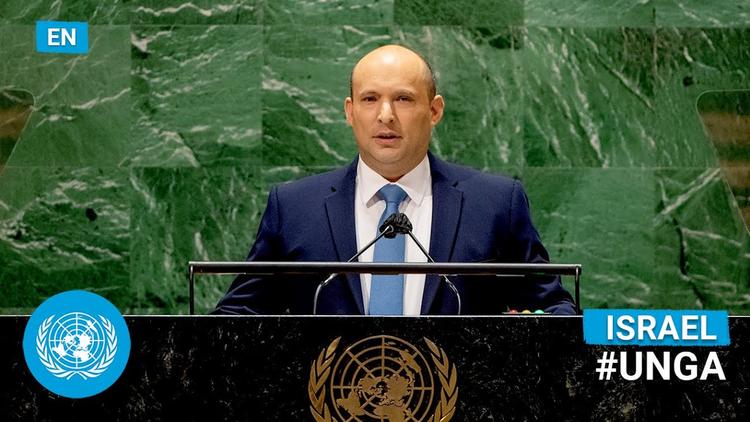 Ann Arbor (Informed Comment) – The Israeli newspaper Arab 48 reports that far-right Israeli Prime Minister Naftali Bennett, in his address to the U.N. General Assembly on Monday, ignored the Israeli-Palestinian struggle and focused instead on the issue of Iran. He alleged that the Iranian nuclear program had “surpassed all red lines,” asserting that Iran is attempting to produce nuclear weapons in secret sites.

Cole: I need to interrupt this reportage right here. Iran has a civilian nuclear enrichment program. It does not have a military nuclear weapons program. There isn’t a scintilla of evidence that Iran is attempting to produce nuclear weapons. There is evidence that it is demonstrating a capacity to go in that direction if it is severely threatened. This is called “nuclear latency” or the “Japan option,” and it is a form of deterrence.

Israel, in contrast, defied President Kennedy and President Johnson, who wanted it to avoid proliferating nukes and wanted to avoid a nuclear arms race in the Middle East. Helped behind the scenes by France and Britain, Israel made a nuclear weapon and by now has a stockpile of hundreds of them. That kicked off an Iraqi interest in nuclear weapons, though Baghdad’s program was never very advanced, which in turn helped draw the United States in the Iraq War.

So Bennett accusing Iran of crossing red lines is the height of hypocrisy. Iran does not have a nuclear bomb. It isn’t even close. It doesn’t have a nuclear weapons program. Israel has hundreds of atom bombs.

You really need a stronger word than hypocrisy.

As usual, the Israeli far right is trying to take international attention off its illegal occupation and brutalization of five million stateless Palestinians by frantically pointing instead at Iran.

Back to our regularly scheduled programming:

Bennett, Arab 48 says, used the speech to buck up the morale of his fractious government, made up of a smorgasbord of disparate and opposing parties. He said that in Israel, after four elections over two years and the possibility of holding further elections for a fifth time, a degree of peace, calm and stability has been achieved. He said that what started as a political accident had turned into a success, calling Israel “the start-up nation.” He went on to discuss at great length Israel’s approach to the coronavirus.

Bennett ignored President Biden’s two initiatives, of achieving a two-state solution (and therefore a Palestinian state, which Bennett opposes) and restoring the 2015 Iran nuclear deal (which Bennett also opposes). Nor did he reply to Palestine President Mahmoud Abbas’s ultimatum this weekend that Israel must withdraw from the Occupied Palestinian West Bank within a year or face prosecution at the International Criminal Court for its theft of vast swathes of Palestinian land from the families that own it.

Bennett insisted that Israel should not be defined by its struggles, saying that Israelis don’t get up every morning and think about conflict.

This is true, but it it may not be as positive as Bennett portrayed. Israeli-American journalist Mairav Zonszein replied,

The most memorable line in Bennett's UNGA speech imho is when he said "Israelis don't wake up in the morning and think about the conflict." It's true, they don't, because they have the luxury not to. Palestinians don't have that luxury. But it also skews the reality /1

Besieged Palestinians being encroached on in the West Bank don’t have the luxury of ignoring the conflict Israel is imposing on them.

He resorted to the old chestnut that Israel is the only democracy in the Middle East. It is hard to call a “democracy” a system where one ethnic group has power over millions of other people from a different ethnic group, most of whom are kept stateless and therefore without the right to have rights.

Bennett accused Iran of wanting to dominate the Middle East with a nuclear umbrella.

That isn’t actually possible, because Iran doesn’t have a nuclear bomb or even a nuclear weapons program.

This assertion is more hypocrisy. Israel is the country that brandishes its nuclear weapons at Middle East nations.

Further, the idea makes no sense. Iran wouldn’t be the only nuclear power in the region and could not in this way become hegemonic. Not only Israel but Pakistan has a mature nuclear arsenal, as does India. The United States and the Russian Federation, both with troops in the Middle East, are both nuclear powers. China, which has increasing interests in the Middle East, is a nuclear power. If Iran did have a nuclear bomb, which it doesn’t, it would be the least of these players and not in a position to use such a weapon to dominate the region.

Bennett is just fearmongering on the Iran issue, and continuing the tradition of his predecessor, Binyamin Netanyahu, of using it for the purposes of misdirection. Don’t, he is saying, look at the houses Israeli squatter stole from Palestinians in Hebron today, look over at the ayatollahs in Tehran.

Luckily, President Biden is in no mood for this game, and it is still possible that he can restore some version of the Joint Comprehensive Plan of Action of 2015, which is the actual path to preventing Iran from ever deciding to weaponize its enrichment program.

Unfortunately, Biden and the majority of Washington Democrats will do nothing about the creeping ethnic cleansing of the Palestinians, despite all the trouble for everyone that will ensue from this inaction.