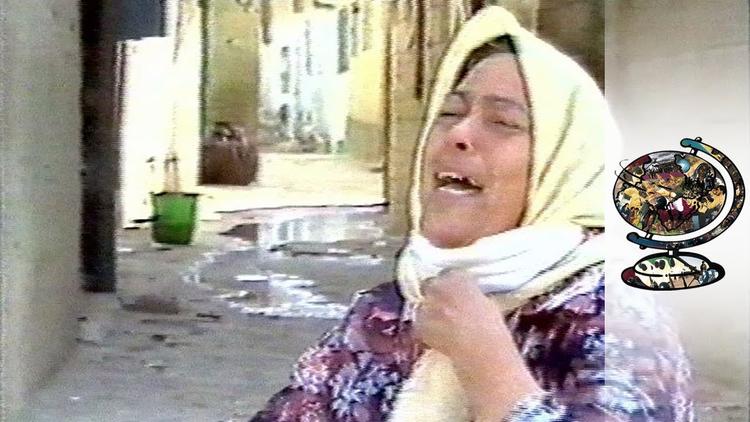 ( Electronic Intifada) – The US withdrawal from Afghanistan marks the end of the latest in a long list of disastrous American military interventions. A quick review of the past 50 years reveals a dismal pattern of American betrayal and lack of accountability leaving behind suffering and failed states.

We are familiar with the US defeat in Vietnam and withdrawal from Saigon in 1975 but who remembers the chaos left behind in Laos or Cambodia?

Or consider the Reagan administration’s interventions in Nicaragua, Guatemala, El Salvador and Honduras.

Their legacy today is the children and families at our southern border who are refugees from Reagan’s policies – which included supporting genocidal death squads.

We can add to the list various countries devastated and abandoned by the US across Western Asia and North Africa, including Libya, Iraq, Syria, Yemen and Lebanon. The list grows even longer when we add interventions in Africa, Central Asia, South America and the Caribbean.

“The American-led fight against terror by military force and supporting authoritarian governments in the Middle East, Asia and Africa has ravaged the quality of governance and the lives of ordinary people,” journalist Rami G. Khouri wrote recently.

That is putting it mildly.

I saw this destructive pattern up close in May 1982, when I led a delegation of relief and development specialists to Lebanon. On 4 June we found ourselves under the US-funded Israeli bombing of Beirut, launching a war that killed at least 17,000 Palestinian and Lebanese civilians and wounded tens of thousands more.

Israel followed with a ground invasion on 6 June. A week later, Israeli forces had occupied most of Lebanon and besieged its capital – ostensibly in order to rout the Palestine Liberation Organization that was then largely based in the country.

A US-brokered ceasefire agreement reached in mid-August stipulated that the PLO had to withdraw its military and political personnel from Lebanon and Israel’s army would remain outside of Beirut.

As part of the agreement, the US committed to provide safety for the more than 300,000 Palestinian civilians in Lebanon. On 20 August, Reagan ordered the US Marines to begin deploying in Lebanon, along with French and Italian forces, to guarantee security and stability during the PLO withdrawal.

Three days later, Bachir Gemayel, the head of the Israeli-allied Lebanese Forces militia, was elected by Lebanon’s parliament as the country’s president. But on 14 September, before he had taken office, he was assassinated with a massive car bomb.

Defying the United States, Israel violated the ceasefire agreement and occupied West Beirut, including the area of the Sabra and Shatila refugee camps.

On the evening of 16 September 1982, Israel sent the Lebanese Forces militia into Sabra and Shatila, where thousands of now defenseless Palestinian civilians lived.

But Sharon had insisted that despite the internationally supervised PLO withdrawal, more than 2,000 Palestinian “terrorists” were still hiding out in refugee camps.

It was a complete fabrication. According to declassified Israeli documents and accounts of former US officials, Sharon and other Israeli leaders misled American diplomats into accepting the false claims about thousands of Palestinian “terrorists” and defied Washington’s requests to withdraw Israeli forces from Beirut.

The same night the Lebanese Forces militia – also called Phalangists – entered the camps. Israeli officials were already aware that civilians were being killed, according to historian Seth Anziska.

Israeli foreign minister Yitzhak Shamir had reportedly already heard about a “slaughter” going on in the camps. But when he and other senior Israeli officials met their American counterparts on 17 September, Shamir made no mention of it.

“Where are you from, my friend?”

Before news of the massacre broke, I returned to Beirut with two leaders from Mercy Corps International with proposals for medical and economic relief projects in Lebanon. We did not reach the refugee camps until Monday morning, 20 September.

Our experience was mild compared to what the Palestinian survivors and international medical personnel serving in Palestinian hospitals had experienced that weekend. We entered Sabra and Shatila at around 11 am and were met by Lebanese Red Crescent workers who gave us handkerchiefs soaked in cologne.

“Keep this at your nose as the smell of decaying bodies will make you sick,” we were told.

Five minutes later we stood in shock and tears as mothers screamed in desperate grief when workers pulled two bodies, and body parts, of their loved ones from the rubble.

After several interviews, I approached a Muslim cleric overlooking a deep pit where workers were carrying body bags for burial. I expressed my condolences and the sheikh shook his head.

“I saw many of the victims at Friday prayers,” I recall him saying.

“We will never know how many died here,” he added. “On Friday evening I heard shots and saw the bodies of several men loaded onto trucks. Only God knows where they were buried.”

The names of 1,400 victims have been documented. But the actual death toll is thought to be much higher because the Phalangists abducted many victims.

Then he asked the dreaded question: “Where are you from, my friend?”

I paused in embarrassment and said, “The United States, and I know the blood of these victims is on our hands.”

“Yes, the blood is on your hands as Americans,” he responded. “But I thank God you are here to see what happened. All we ask is that you go home and tell the truth of what you have witnessed here.”

The following day we met with Lebanese journalists who said it was common knowledge the US had promised security for the Palestinians and to keep Israel out of Beirut.

Had the US government – which undoubtedly had the power to do so – stood up to Ariel Sharon’s deceit and ordered Israel to withdraw from Beirut, the massacre could have been avoided.

A clear case of genocide

To their credit, people in Israel held one of the largest demonstrations anywhere protesting the massacre.

However, in 1983, the Kahan Commission, Israel’s official investigation, concluded that officials and personnel of that country were only “indirectly responsible” for the massacre.

Sharon was removed from his position as defense minister but the following year he was back in the government. In 2001, he became prime minister.

No Israeli and not a single Lebanese militia leader was tried or convicted for the genocide at Sabra and Shatila and the US escaped accountability for abandoning the Palestinians.

The Sabra and Shatila massacre was a clear case of genocide by any standard of international law, yet the responsible parties escaped prosecution and conviction.

Indeed, transcripts of discussions between senior Israeli officials and the Lebanese Forces militia starting in January 1982 reveal the genocidal intent.

The transcripts, published in 2018, include talk of “cleaning out of the [Palestinian] refugee camps” and the need for “several Deir Yassins” – a reference to the notorious April 1948 massacre of Palestinians in a village near Jerusalem during the Nakba.

They also contain explicit references to the decimation and expulsion of the Palestinian refugee population from Lebanon so that “Sabra would become a zoo and Shatila Beirut’s parking place.”

While US officials and mainstream media avoid the topic, the pattern of genocide and injustice against Palestinians continues.

Yet the political climate is changing and the time has come for the United States to take responsibility for its complicity in Israel’s war crimes, including the Nakba and the 1982 massacre.

The US public can take up the cause by demanding Israel be held accountable for crimes inflicted on Palestinians. As taxpayers, we can demand an end to the almost $4 billion annual grant we give Israel.

The accountability can be measured by an immediate end to Israel’s theft of Palestinian land to build colonial settlements in the occupied West Bank, including Jerusalem.

We must demand that full equality and political rights be guaranteed for Palestinians and the dismantling of the Israeli apartheid system which has lately been acknowledged by human rights groups including Human Rights Watch and Israel’s own B’Tselem.

Finally, the millions of Palestinian refugees scattered around the globe must be allowed to exercise their right to return and receive compensation.

The time has come to draw a line and say enough suffering and death for Palestinians. No more Sabras and Shatilas.

Donald Wagner is a long-time activist for Palestinian rights and an ordained Presbyterian clergyperson. His memoir will be published in spring 2022.

Reprinted from the Electronic Intifada with the author’s permission