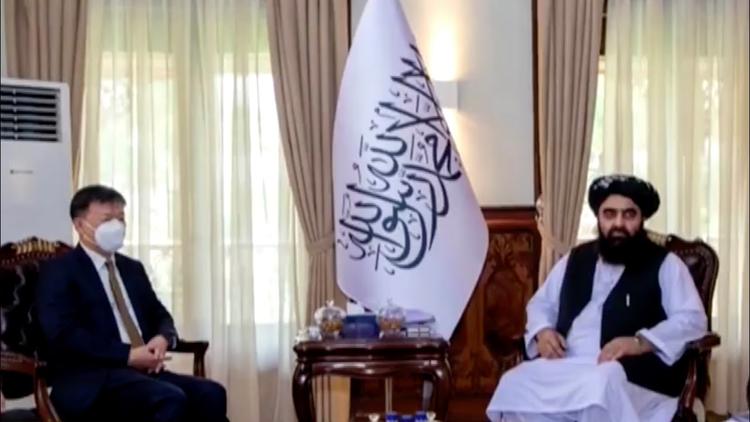 Ann Arbor (Informed Comment) – Laura Zhou at the South China Morning Post reports that Zhao Lijian, spokesman for the Chinese Foreign Ministry, on Wednesday called on the United States not to sanction the Taliban in Afghanistan and to cease sequestering $9.5 billion in Afghanistan government funds that Washington is withholding from the Taliban.

Zhao is quoted as saying, “The US should give up the path of sanctioning, and should not create obstacles for the peaceful reconstruction and economic development of Afghanistan.”

American sanctions on Iran, with which China does substantial business, have been a sore point between Beijing and Washington.

In contrast, US Secretary of State Anthony Blinken insisted that the U.S. would use its economic leverage to ensure that the Taliban allowed the free passage out of the country of those who wanted to leave, as Joel Gehrke at the Washington Examiner underlined.

While the Biden administration can impose unilateral economic sanctions on the Taliban, an international effort to pressure the new government would require assent of all five members of the United Nations Security Council. China is announcing that it will not be on board with such UNSC sanctions.

Al Jazeera, because it is based in Doha, Qatar, has been in a position closely to cover the Taliban negotiating team there, and reports that the Chinese foreign ministry welcomed a Taliban delegation last July and acknowledged how important the movement was to Afghanistan.

Al Jazeera asked what the Chinese want in Afghanistan and answered this way:

1. Beijing wants guarantees from the Taliban that they will prevent Uighur fundamentalists from attacking Xinjiang in northwest China from Afghanistan, which has a short border with China in the Pamir mountains. Some Uighur militants over the years have fought alongside the Taliban.

2. China wants to invest in Afghanistan so as to share in its natural resources and mining. Afghanistan has iron, copper, uranium and lithium, which China would like to mine. A Chinese company already operates a copper mine.

The Qatar-based news agency says that the Taliban appear also to want this Chinese investment, calling its neighbor “a friendly nation,” and welcoming its role in rebuilding Afghanistan, which has suffered forty years of war. Taliban spokesman Sohail Shahin pledged that the Taliban would guarantee the security of Chinese investments in Afghanistan. Another Taliban spokesman recently admitted that the country would be dependent on Chinese funds for rebuilding the economy.

3. China wants to incorporate Afghanistan into its vast pan-Asian transportation and infrastructure plan, the One Belt, One Road. Al Jazeera alleges that the Chinese demarche in South and Central Asia is intended to assert Chinese economic and policy strength in the face of competition from the US on the one side and from the Russian Republic on the other.

The analysis says that the Taliban for their part hope for Chinese investment and help with rebuilding their economy, for Chinese support in international forums, and for a possible Afghanistan-Pakistan-China strategic agreement.

China also fears that the US will pivot more forcefully toward East Asia now that it is free of its Afghanistan entanglement. The government of Xi Jinping is protesting the possible inclusion by the Biden administration of South Korea in the Five Eyes intelligence-sharing arrangement, which had previously been limited to white English-speaking countries– the US, Canada, Britain, Australia and New Zealand. Likewise the Biden administration is strengthening its naval relationship with Australia and the UK, especially with regard to nuclear submarines, with China as the unstated target.