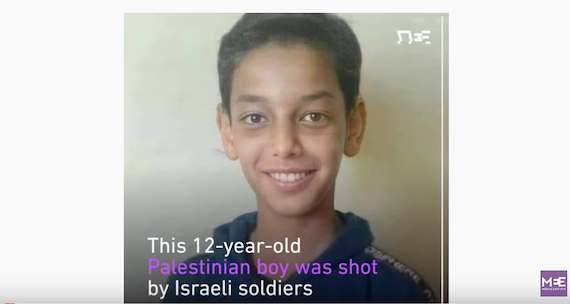 ( Middle East Monitor) – So much for the Israeli army supposedly wanting to “reduce” the number of Palestinians it shoots. An Israeli soldier shot and killed another Palestinian child in the besieged Gaza Strip on 21 August. Omar Hasan Abu Al-Nil was just 13. The boy succumbed to his wounds last Saturday.

According to eyewitnesses, Omar had been watching — peacefully, it must be said — a protest against the Israeli-led siege of Gaza. An Israeli army sniper calmly and deliberately – acting under the orders of his commanding officer – looked through his gun sight and fired a live round through the boy’s neck. Omar lost consciousness straight away.

His death means that Israeli army killers have now ended the lives of 73 Palestinian children in the West Bank and Gaza Strip this year alone.

The siege of Gaza is a lengthy and ongoing Israeli injustice. Even before it was fully imposed in 2007, Israel had for years decreed military closures of the territory, shutting down its crossing points at will. The siege has resulted in the entirely predictable collapse of the Palestinian economy in Gaza.

It is no wonder that ordinary Palestinians all over the territory have risen up against this strangulating injustice, and are once again marching in peaceful protests against the siege. This, remember, is despite the very real possibility that they could be shot and killed, or suffer life-changing injuries simply for standing up for their legitimate and very basic human and political rights.

More than two million people live in the crowded coastal enclave today, half of them children. Around 80 per cent of the population are refugees and their descendants from inside what is now known as Israel; their home towns and villages are within historic Palestine, which has been occupied since 1948.

Between 1947 and 1949, Zionist militias deliberately and systematically drove out around 800,000 Palestinians. Although they have a legitimate right to return, they have never been allowed to do to, solely because they are not Jews.

Today, the only crossing point that Israel does not have full control over is in the southern Gaza town of Rafah leading to and from Egypt. However, the US-backed military dictatorship which has ruled Egypt since the coup in 2013 is also a willing accomplice in the siege. Another example of Egyptian complicity was witnessed last week.

Palestinians once again protested at the boundary fence on Wednesday 25 August. Israeli soldiers once again fired live ammunition at the demonstrators; their officers had reportedly ordered their troops to behave “more aggressively” towards the Palestinians.

Five of the injured were shot with live ammunition. Journalist Taha Raafat Baker, 32, was hit in the leg by a tear gas canister; another child was among the wounded, said Palestinian human right group Mezan.

Egypt responded to the Israeli attacks on Palestinian protestors by helping the Israeli killers and punishing their Palestinian victims. The regime in Cairo imposed an indefinite closure on the Rafah crossing. The Salah Al-Din goods crossing – where only limited items are permitted to enter Gaza at the best of times – is also closed.

Hundreds of Palestinians are now completely stranded in Egypt. Many are running out of money and have no means to access family support networks; international money transfers to and from Gaza are usually impossible to make.

Yet Egypt is only one component of the international conspiracy against the civilian population of the Gaza Strip. As Tamara Nassar, my colleague at The Electronic Intifada has noted, the UN and Qatar are also colluding in the siege. Both have agreed to implement a programme which gives Israel a veto over the list of those Palestinians who will and will not be given food aid.

This is collective punishment, yet another of Israel’s many war crimes. How many more will it be allowed to commit with impunity before the siege of Gaza is brought to an end? This must happen unconditionally and without delay.