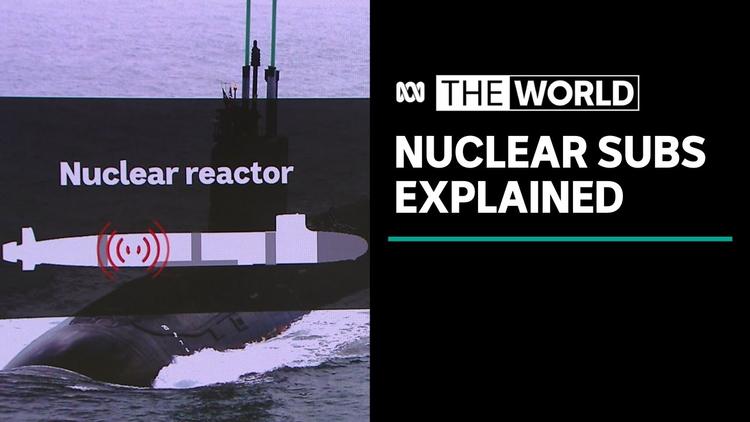 The federal government on Thursday announced a landmark defence pact with the United States and United Kingdom that involves this nation acquiring nuclear-powered submarines. The question of nuclear submarines in Australia has been bubbling along for some time – and with it, whether we should also develop a nuclear energy sector.

Prime Minister Scott Morrison insisted the defence deal did not mean Australia would look to develop a civil nuclear capability.

But there is strong support within Coalition ranks for a homegrown nuclear power industry. And the Minerals Council of Australia on Thursday quickly pointed out the “opportunity” the submarine announcement created for expanding nuclear technology in Australia.

The submarine announcement is sure to trigger a new round of debate on whether nuclear energy is right for Australia. But let’s be clear: the technology makes no sense for Australia, economically or politically, and would not be a timely response to climate change.

The topics of nuclear submarines and nuclear energy are often discussed in tandem.

The technology is similar: the energy source for a nuclear submarine is basically a miniature version of that for a power station. And a similar supply chain is needed for mining and processing uranium, fuelling the reactor and managing waste. That also means both technologies require similar skills and regulatory frameworks.

The Minerals Council of Australia chief executive Tania Constable on Thursday responded to the submarine announcement, pointing out the apparent synergies with nuclear power:

This is an incredible opportunity for Australia’s economy – not only will we develop the skills and infrastructure to support this naval technology, but it connects us to the growing global nuclear power industry and its supply chains.

Now that Australia is acquiring nuclear submarines which use small reactors, there is no reason why Australia should not be considering [small modular reactors] for civilian use.

Mole argued that of the top 20 world economies, all have nuclear power except Australia, Italy and Saudi Arabia. And as nations commit to achieving net-zero carbon emissions by 2050 “it’s noteworthy that no major economy intends doing so without nuclear power in the mix”, he said.

And in February this year, Lindsay Hughes, a senior analyst in the Indo-Pacific program of research organisation Future Directions International, also suggested Australia should develop a nuclear power sector to support a nuclear submarine fleet.

Hughes argued a nuclear power sector would provide skills that could be transferred into the military domain, including nuclear-powered submarines, saying:

A nuclear power sector would demand university graduates with skills in engineering, physics and mathematics, the same skills and skill levels that the US Navy requires to operate its nuclear submarines. Australian graduates with similar skills could be employed on Australian nuclear-powered submarines.

Hughes conclude a nuclear power sector ought “could potentially provide much of the foundational skills required to maintain and operate a nuclear-power submarine fleet”. That really is the military tail wagging the electricity industry dog.

Nuclear power is not the logical next step

Even if there’s agreement Australia needs nuclear submarines patrolling the South China Sea, there is no logical jump for a nuclear power sector to support that activity.

In an opinion piece in March this year, former defence minister Christopher Pyne wrote that without nuclear energy, Australia could not support nuclear submarines – but establishing the former would be difficult. He went on:

Australia does not have a nuclear industry. One cannot be created overnight. Even if there was the political will to create one, which there isn’t, what political party is going to waste its political capital on creating a legislative framework for a nuclear industry that can sustain nuclear submarines, that has zero chance of passing any Upper House in any jurisdiction in Australia.

A nuclear industry in Australia would need a solution for the safe storage and disposal of high-level radioactive waste – this appears unlikely, given the public opposition to establishing a site to dispose of even low-level nuclear waste in Australia.

And research suggests there would be little community support for nuclear power – especially following the Fukushima disaster – let alone a community willing to host a reactor.

The decision to build nuclear submarines raises a new set of issues about uranium processing, fuel fabrication and waste management. The Morrison government needs to tell the community how these will be managed.

What’s more, while nuclear power may have once been cheaper than wind or solar, the economics have since changed dramatically.

Nuclear power plants are very expensive to build and the economics of nuclear power are getting steadily worse. By contrast, renewables continue to come down in price.

As I wrote in my new book Long Half-life: The Nuclear Industry in Australia, global average prices for new power last year were 3.7 cents per kilowatt-hour for large solar, 4.1 cents for wind, 11 cents for coal and 16 cents for nuclear.

It would also take at least ten years to build one nuclear plant in Australia. So it’s clearly not an adequate response to the urgent challenge of climate change.

And the water use of a nuclear power industry, needed for cooling, would be a fundamental issue on the driest of all inhabited continents.

Over the past 20 years, new nuclear reactors have struggled to establish a business case in any OECD country, with the potential exception of South Korea. The world has obviously made its decision on nuclear: last year 192 gigawtts of renewables came on line, compared with a net 3 gigawatts of nuclear power.

The future is renewables

However, the massive public subsidy of this project must not be used to justify the much greater risks of nuclear power.

Australia is blessed with a bounty of sun and wind, and is well on the way to achieving 50% renewable energy by 2030, even without government help. No matter which way you look at it, nuclear power in Australia makes no sense at all.

ABC News Australia: “How nuclear-powered submarines work and how they compare to other types of submarines | The World”