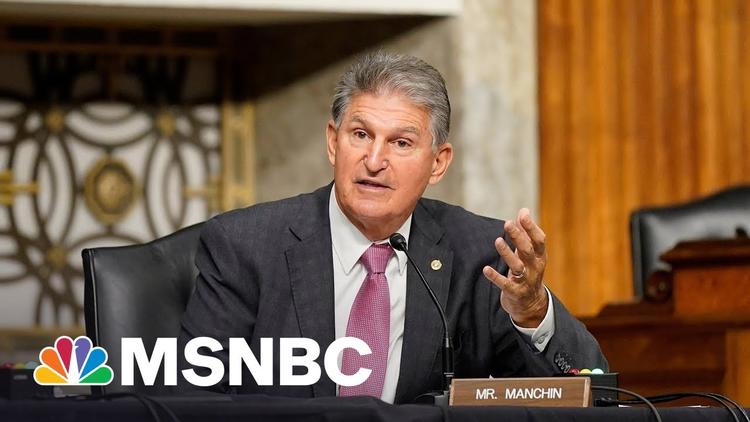 Manchin: “Every Member of Congress has a solemn duty to vote for what they believe is best for the country and the American people, not their party. Respectfully, as I have said for months, I can’t support $3.5 trillion more in spending when we have already spent $5.4 trillion since last March. At some point, all of us, regardless of party must ask the simple question – how much is enough?”

The constant reference to the 3.5 trillion is misleading. That money will be spent over ten years. Annual expenditures will be less than half of military expenditures. As for how much is too much, as long as human and material resources remain idle more expenditures are appropriate. Climate and the pandemic are global emergencies and require total mobilization.

Manchin: “What I have made clear to the President and Democratic leaders is that spending trillions more on new and expanded government programs, when we can’t even pay for the essential social programs, like Social Security and Medicare, is the definition of fiscal insanity.”

This is the old canard about Social Security and Medicare. Any shortfall in program resources, which are over a decade off, could be met by simple fixes, including lifting the cap on income subject to taxation. And as for fiscal insanity, the US has most costly and least effective healthcare system in the industrial world. At the very least extending Medicare to those 60 -65 would improve finances and population health, but Manchin and his like prevent such options even from consideration.

Manchin:: “Suggesting that spending trillions more will not have an impact on inflation ignores the everyday reality that America’s families continue pay an unavoidable inflation tax. Proposing a historic expansion of social programs while ignoring the fact we are not in a recession and that millions of jobs remain open will only feed a dysfunction that could weaken our economic recovery.”

Inflation at this time is as much a supply side as a demand side problem. That historic expansion of social programs will dramatically reduce childhood poverty and give parents more opportunities to enter the workforce. One consequence will be some relief for the supply side of the inflation equation.

Manchin: “This is the shared reality we all now face, and it is this reality that must shape the future decisions that we, as elected leaders, must make.

Since the beginning of this reconciliation debate, I have been consistent in my belief that any expansion of social programs must be targeted to those in need, not expanded beyond what is fiscally possible.”

This might be Manchin’s seductive poison pill. Political support is more likely for universal programs like Social Security. Otherwise middle class citizens find themselves taxed for programs they can’t use. And the process of qualifying for benefits is usually complicated and infuriating. Just ask many recipients of ObamaCare.

Manchin: “Our tax code should be reformed to fix the flaws of the 2017 tax bill and ensure everyone pays their fair share but it should not weaken our global competitiveness or the ability of millions of small businesses to compete with the Amazons of the world.”

The tax code is not the primary barrier to small business competitiveness Unregulated markets and government subsidies play a much larger role. And the response needs to be a reformulation of anti-trust law for a digital age.

Manchin: “Overall, the amount we spend now must be balanced with what we need and can afford – not designed to reengineer the social and economic fabric of this nation or vengefully tax for the sake of wishful spending.”

I would like to know what constitutes fair or vengeful taxation. I don’t see much of either.

Manchin: “In August, I recommended we take a strategic pause to provide time to develop the right policies and to continue to monitor how the pandemic and economic factors are affecting our nation’s fiscal situation before we spend more. Throughout September, I have made it clear to all those who would listen the need to means test any new social programs so that we are helping those who need it the most, not spend for the sake of spending.

While I am hopeful that common ground can be found that would result in another historic investment in our nation, I cannot – and will not – support trillions in spending or an all or nothing approach that ignores the brutal fiscal reality our nation faces.”

Brutal fiscal reality? Every developing nation’s leader wishes he/she faced such a reality. The US can still borrow long term at historically low rates. The brutal reality is a pandemic that has killed nearly three quarters of a million fellow citizens and a climate steadily worsening. And all this with a broken health care system and an infrastructure graded D plus.

Manchin: “There is a better way and I believe we can find it if we are willing to continue to negotiate in good faith.”

One possible good faith negotiation might be to focus on the coal miners Manchin is supposed to protect. What kind of jobs do they have and how is their health. How about a generous buyout and promise of well compensated employment in WV?

Manchin: “If there is one final lesson that will continue to guide me in this difficult debate ahead it is this: America is a great nation but great nations throughout history have been weakened by careless spending and bad policies. Now, more than ever, we must work together to avoid these fatal mistakes so that we may fulfill our greatest responsibility as elected leaders and pass on a better America to the next generation.”

Absent democratic reforms and a more proactive government there is little chance of passing on a better America to the next generation.