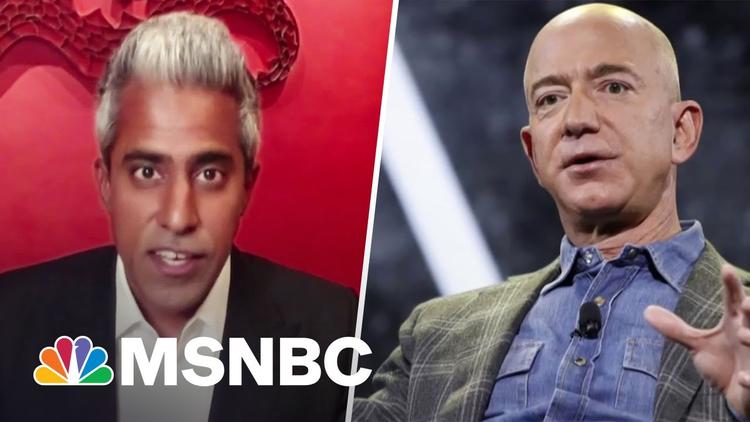 ( Inequality.org) – Great wealth can do great damage. Grand personal fortunes, we’ve come to understand, can menace our democracy and distort our economic life. But these fortunes can also wreak a much more hidden havoc: They can mess up the minds of people who hold them. Great fortunes can leave their owners feeling supremely sure they themselves must be great.

Great enough to save the world if they put their mind to it.

True, not every fabulously rich person has visions of global do-good glory. But not every heavy smoker gets lung cancer either. We don’t treat the survival of these smokers as proof that cigarettes can be safe. And we shouldn’t treat those super rich who do manage to keep their wits about them as proof that grand personal fortunes don’t invite a swellheaded megalomania.

Our latest self-absorbed billionaire savior? That would have to be former Walmart exec Marc Lore. This 50-year-old is now creating, his PR team trumpets, “a new city in America that sets a global standard for urban living, expands human potential, and becomes a blueprint for future generations.”

Lore made his first fortune founding — and selling — Diapers.com and then repeated that get-rich two-step by founding a competitor to Amazon that he would later sell to Walmart for $3 billion in cash and stock. Lore proceeded to stick around Walmart for four years as CEO of the retail giant’s U.S. e-commerce division.

Lore’s claim to fame at Walmart? In 2016, he ended up with America’s largest individual executive pay haul. His $236.9 million windfall amounted to over $4.5 million per week, more than a Walmart worker making $11 an hour could have earned in nearly 200 years.

Lore left Walmart earlier this year to follow his utopian dreams, but where exactly his urban utopia will sit continues to be uncertain. He’s looking at sites ranging from desert land in the Mountain West to swatches of empty acreage in Appalachia. Things will move fast, Lore believes, once he has the land in hand. The first 50,000 residents of Telosa — the name for Lore’s magical city, taken from the ancient Greek for “highest purpose” — could be enjoying life in a health-conscious, totally sustainable, and architecturally avant-garde urban cultural oasis as early as 2030.

Getting Telosa’s first phase complete will take some $25 billion. The cost of completing the project will run somewhere in the vicinity of $400 billion, all raised from a combination of investors and philanthropists, backed by some expected direct government aid and subsidies.

Jeff Bezos Should Have…

Lore currently has a crew of 50 full-time staff and volunteer experts working out the details for getting Telosa up to speed. But the city’s overall vision remains his. Telosa’s land will belong to the community. The residents — initially selected through an application process — will own the homes that rest on it.

The city of the future that cryptocurrency king Jeffrey Berns wants to build has an address in Nevada, a state whose tax benefits — like no income tax — this mega-millionaire finds mighty appealing. Berns has so far laid out $300 million for land outside Reno, offices, and staff.

Like Telosa’s Lore, Berns says he has no interest in getting rich off his project, and he’s pledging to step away from his current decision-making authority. Almost all dividends the project will produce, he adds, will go to a “distributed collaborative entity” that melds residents, employees, and investors into a “blockchain” that tracks everyone’s ownership and voting status in a digital wallet.

Berns expects his new city — Painted Rock — to host some 36,000 residents and generate $4.6 billion in annual economic output. He’s been trying to get the state to enact a new local-government model that lets his city run its own show as an “innovation zone.” His ultimate goal? Berns says he’s endeavoring to create a place where government and Corporate America “can’t interfere.”

Billionaires Elon Musk and Jeff Bezos seem to see their own particular interference-free happy place in outer space. Musk’s Space-X is aiming to enable people “to live on other planets.” Bezos envisions “millions of people living and working in space.”

Our super rich, notes Guardian columnist Jessa Crispin, no longer appear content “to just sneer down at us from their private jets.” The more our real world deteriorates, she quips, the greater their interest “in telling the rest of us how to live.”

Crispin and other analysts have found in what Telosa’s Marc Lore has to tell us echoes of the ideas of the great late-19th-century reformer Henry George, perhaps the most powerful voice against the plutocracy of the original Gilded Age. Land, George believed, needed to be “common property,” and that notion runs through Lore’s plan for his urban utopia.

But George, if around today, would not likely be cheering Lore on. He’d be much more likely to be outraged that here, in the 21st century, men of great wealth are still leveraging their fortunes to privilege their own individual visions for our common future. George’s own vision for a better tomorrow had no place for concentrated wealth in any way, shape, or form.

“No person, I think, ever saw a herd of buffalo, of which a few were fat and the great majority lean,” as George once reflected. “No person ever saw a flock of birds, of which two or three were swimming in grease, and the others all skin and bone.”

Henry George would have welcomed — as an alternative to billionaire utopias that draw from his notions — the bottom-up advocacy of contemporary movements like the drive for community land trusts. These trusts typically operate by leasing land to families on a long-term, renewable basis. The family buys the house that sits on the land. The long-term lease makes the house price affordable.

Community activists and groups worldwide are now partnering with government officials to support, organize, and operate land trusts. These activists and groups, notes the three-year-old Center for Community Land Trust Innovation, “are doing the hard work of establishing transformative forms of tenure in their own communities.” They’ve so far established, in the USA, some 225 such trusts.

We actually have a word for the hard slog of forging “transformative” social change, community by community. That word: democracy, the idea that we ennoble our future and ourselves when we sit down together to discuss and debate what that future should bring. Rich people spending fortunes on promoting their own personal visions undercut this democracy — and frustrate long-time activists like Sarah Anderson at the Institute for Policy Studies.

“Instead of creating their own utopias,” she wonders, “why can’t billionaires just pay their taxes so we can have public investment in good communities?”

That public investment would be a powerful antidote to our top-heavy America, a step that could help get our tottering democracy off the ropes. Some of our billionaire utopians, for their part, do share the sense that our democracy now stands imperiled.

“I don’t believe,” says the crypto billionaire Jeffrey Berns, “we’ll have a democracy 20 years from now if we don’t do something new.”

Neither do many of the rest of us. But letting the richest among us chart out our future only qualities as “something new” in the delusional brains of the outrageously wealthy.