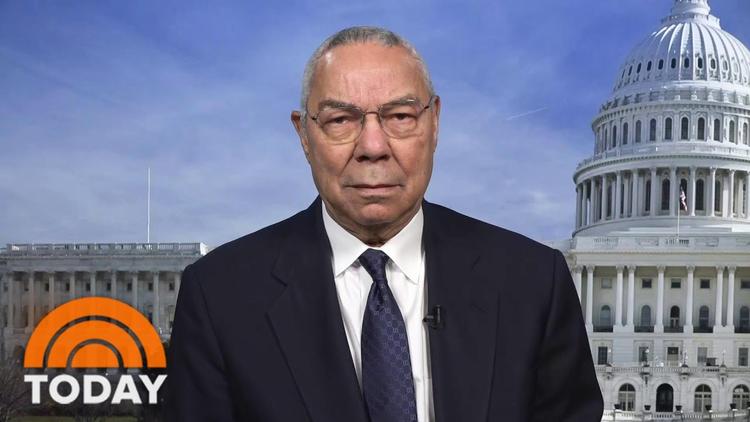 Ann Arbor (Informed Comment) – Colin Powell died on Monday, not long after his rival inside the Bush administration, Donald Rumsfeld. Both of them tore down the post-World War II order that the framers of the United Nations had erected (among them, Harry Truman and Dwight Eisenhower), which aimed at criminalizing aggressive warfare. Despite his many achievements, Powell will go down in history as a warmonger who betrayed his own “ Powell Doctrine” of limited military objectives to become part of an aggressive war of choice against Iraq, ruining the lives of millions of Iraqis and Americans and making the world back into the dangerous jungle it had been in the 1930s.

The difference between Rumsfeld and Powell was that Rumsfeld was not made the point man for the lies that the Bush administration told about Iraq’s so-called “weapons of mass destruction.” On February 5, 2003, Powell was sent by Bush and his Neocons to present the case for war to the United Nations. His litany of untruths and fantasies provoked, according to an eyewitness to whom I spoke shortly thereafter, laughter in the room. Laughter. This UN official told me he thought that the push for war must be over after that humiliation. I told him he did not know the Bushies, who were completely shameless.

Among the assertions Powell made that provoked such mirth was, “One of the most worrisome things that emerges from the thick intelligence file we have on Iraq’s biological weapons is the existence of mobile production facilities used to make biological agents.”

Biological weapons labs require a clean room that interfaces with the outside world, where microbes are killed so that they don’t escape. You can’t put a biological weapons lab on a winnebago and drive around Iraq’s pot-holed streets, throwing the viruses and bacteria up onto the hazmat suits of the scientists who, without a clean room, would track them out into the world.

Powell also accused the secular, socialist one-party Baath state of Iraq, a notorious crusher of Muslim fundamentalist movements, of “harboring” Abu Musab al-Zarqawi, whom he incorrectly called “al-Qaeda.” In fact, Saddam’s secret police had been instructed to track down and neutralize al-Zarqawi, whom they characterized as an associate of the “Saudi terrorist” Usama Bin Laden, of both of whom Saddam was afraid.

Such tissues of lies and transparent falsehoods were woven throughout the speech that the Neoconservatives in the Bush administration ordered Powell to read out to the world, provoking the laughter and humiliation. Ironically, it was precisely because Iraqis were not white that they could so easily be railroaded by Bush and the Neoconservatives. Britain could never have plausibly been set up that way. Powell should have resigned at that point, but did not.

This shitty task given to Powell, who was of Jamaican-American heritage, by his white colleagues recalls what James Baldwin wrote about African-American soldiers in World War II:

“The treatment accorded the Negro during the Second World War marks, for me, a turning point in the Negro’s relation to America. To put it briefly, and somewhat too simply, a certain hope died, a certain respect for white Americans faded. One began to pity them, or to hate them. You must put yourself in the skin of a man who is wearing the uniform of his country, is a candidate for death in its defense, and who is called a “nigger” by his comrades-in-arms and his officers; who is almost always given the hardest, ugliest, most menial work to do; who knows that the white G.I. has informed the Europeans that he is subhuman (so much for the American male’s sexual security); who does not dance at the U.S.O. the night white soldiers dance there, and does not drink in the same bars white soldiers drink in; and who watches German prisoners of war being treated by Americans with more human dignity than he has ever received at their hands. And who, at the same time, as a human being, is far freer in a strange land than he has ever been at home.”

In the first two-thirds of the twentieth century, educated African-Americans had sometimes gravitated to the Republican Party, associating it with Lincoln and emancipation. That was back before the 1970s “Nixon strategy” of inducting into it the racist whites of the Deep South, who were bruised and sore at the federal legislation in the mid-1960s that ended their Jim Crow Apartheid. Of course, there was a lot of racism in the party (and in its Democratic rival) before the 1970s, too, but at that time it was spread around more rather than being concentrated in the GOP.

But the administration in which Powell served as secretary of state was already deeply entangled in systemic white supremacy. George W. Bush had won the South Carolina primaries when one of his PACs arranged for robocalls asking people if they would vote for Bush’s rival, John McCain, if they knew he had fathered an out-of-wedlock African-American child. The McCains had adopted a daughter from Bangladesh who appeared in family portraits and the racist PAC played on those images.

Bush cynically used Powell and his national security adviser, Condoleezza Rice, for the purposes of tokenism. I remember seeing Bush challenged by a journalist on the lack of diversity in the GOP. Have you ever watched one of their national conventions? You need sunglasses for the glare. Bush replied that when he looked around the table at cabinet meetings he saw Powell and Rice.

Rumsfeld denied that there was a guerrilla war brewing in Iraq in 2003, comparing the situation there to race protests in Benton Harbor, Michigan. In other words, Iraqis were Black and like all Blacks, he implied, were given to a little mayhem, but it was nothing to worry about; their cities burned sometimes, but the white people would be all right.

Bush’s vice president Dick Cheney sold a house back in the 1960s with a covenant attached that it could not in turn be sold to an African-American. Cheney, when he was in Congress, had voted against Martin Luther King Day.

Having used up Powell and spit him out, the Republican party for the rest of his life lurched further and further to the right, meeting up with the John Birch Society and the Ku Klux Klan in the end under Trump. Powell began abandoning the party in 2008, when he voted for Barack Obama because he did not feel that McCain was full-throated enough in combating the racist stereotyping of his rival, as a Muslim and as a radical. That McCain brought on Alaska governor Sarah Palin, who routinely sent out dog whistles to the “patriots” (i.e. white nationalists), must also have hurt.

And then the Republican Party swooned over Donald Trump, perhaps the most virulently racist president since Andrew Jackson, and that is saying something, since Andrew Johnson came after Jackson.

After the January 6, 2021, Capitol insurrection, Powell called for Trump to resign “like Nixon.” A couple of weeks later, as he fought the blood cancer that would kill him by leaving him unable to fight COVID even with a vaccination, Powell announced that he had left the Republican Party.

What he had not realized as a young man was that the party had left him long ago, as soon as Tricky Dick Nixon plotted to induct the white nationalists into the party, which they then gradually took over.

CNN: “Colin Powell: Trump Should ‘Just Do What Nixon Did And Step Down’ | TODAY”