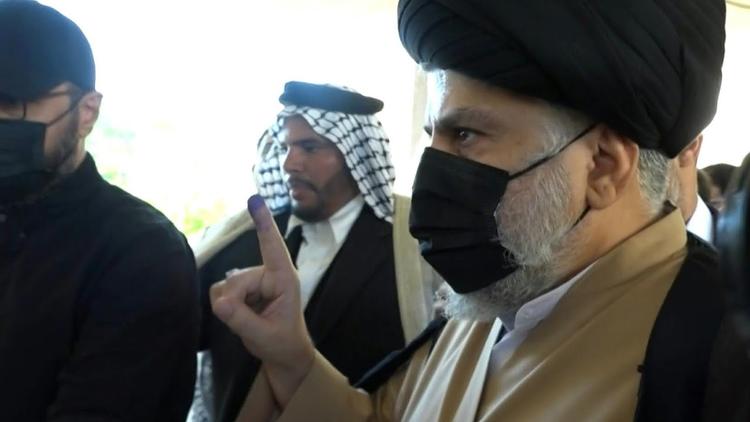 Ann Arbor (Informed Comment) – The elections in Iraq have brought it briefly back into U.S. headlines, though it is a long time since Americans have given the mess they made there any thought. The late Gen. Ray Odierno, the former head of the 8.5-year-long occupation of Iraq who died on Saturday, once fingered a spin-off of Iraqi cleric Muqtada al-Sadr’s Mahdi Army as an “Iran-backed militia,” and Odierno’s troop escalation (“surge”) in 2007 briefly forced Muqtada out of the country to Iran. Odierno was wrong about the Mahdi Army being linked to Iran, as he was wrong about so much else in Iraqi politics. The al-Sadrs stood for Iraqi nativism and their followers hate Iran’s outsized influence in Iraq.

There are two ironies about Odierno’s miscalculation. The first is that his troop escalation had the effect of ethnically cleansing thousands of Iraqi Sunnis, since they were disarmed first, and the Shiite militias came in and chased them out of mixed neighborhoods as soon as US troops had taken their arms. Baghdad went from being 55% Shiite and 45% Sunni to being 75% Shiite under Odierno. The Iran-backed Shiite militias were among the biggest beneficiaries of the surge, which did succeed in reducing violence by reducing the number of mixed neighborhoods so that there was no one close by to kill.

The other is that Odierno is no longer with us but Muqtada cast his vote in Sunday’s parliamentary elections in Najaf. And, on Monday, partial election results showed that Muqtada al-Sadr’s party members had emerged as the largest single bloc in parliament with 73 of 328 seats, which could give them substantial influence in the new government.

The results for the large Kurdish bloc do not seem to be being announced yet. Based on results from the mostly Arab provinces partially counted, the largely Sunni Taqaddum (“Progress”) Party of Mohammed Halbousi is so far second with 38 seats, though I suspect the Kurdish coalition will come in second when its seats are tallied.

In the Arab provinces, the State of Law Party of former prime minister Nouri al-Maliki was a close third with 37 seats. The parties associated with Iran-backed militias did poorly. To form a government, the Sairoun Party of al-Sadr will need to find coalition partners and put together at least 165 seats. His party also had the largest single seat count in 2018 but he was not able to form a government, and cabinet posts were shared among the major parties. His number of seats, however, is greater this time and may well give him a say over who the prime minister is.

In his victory speech, Muqtada said that only government troops should have arms, insisting that the militias or Popular Mobilization Forces (al-Hashd al-Sha`bi) stand down and cease brandishing their weapons.

In the zeroes of this century, Muqtada formed and directed one of the biggest private militias in Iraq, the Mahdi Army, so you wouldn’t have predicted that he would come to uphold the Weberian principle that the state has a monopoly on the legitimate use of force.

He said he wants to put an end to foreign intervention in Iraqi affairs. While this platform, which implies a diminution of Iranian influence, will be welcome in Washington and in Riyadh, Saudi Arabia, it should be understood that he also is referring to the 2500 American troops still in Iraq. Muqtada praised God for the victory of the “Reform block,” the “[true] Iraqi bloc,” which stands for “neither East nor West.”

“Neither East nor West” was a slogan of Ayatollah Ruhollah Khomeini in his 1979 Islamic Revolution, which announced a third force, neither the East Bloc of Soviet Communism nor the Western Bloc of capitalist democracy. Muqtada al-Sadr is using it sardonically to declare Iraq’s independence of both Iran and the United States.

He pledged to fight corruption, a central issue for Iraqi voters and one that has brought down two prime ministers in the past two years if we count the pro-American Mustafa al-Kadhimi, who may not be al-Sadr’s choice to form the next government.

It is estimated that Iraq has brought in $500 billion in oil revenues in the past 15 years and that none of it can be accounted for, having been, apparently, mostly embezzled. I visited Iraq in 2013, and it was like time travel back to the 1980s. It isn’t like an oil state at all. It doesn’t seem that very much new building or infrastructure was done with all that money. Youth began protesting in 2019 against the lack of services– electricity, water, etc.

Muqtada said that all embassies are welcome in Iraq as long as they do not interfere in Iraqi affairs or the formation of the government, trying to reassure the United States. The US embassy has frequently been the target of mortar attacks by Shiite militias, especially after the Jan. 3, 2020 Trump assassination of Iranian Gen. Qasem Soleimani and Iraqi Gen. Abu Mahdi al-Muhandis at Baghdad International Airport.

He warned Washington, “Any intervention will be met by us with a diplomatic response, and perhaps a people’s response, for Iraq is solely for Iraqis, and we will not permit any interference at all.” In the era of the US occupation, the US exercised enormous influence over Iraqi politics, against which the nationalist al-Sadr is still reacting.

Muqtada pledged that Iraqi petroleum would finally belong to the people, and he said that he would work to make the Iraqi dinar a hard currency like those of the global powers.

He told his followers to celebrate the victory without firing their guns in the air; celebratory fire is customary in the Middle East.