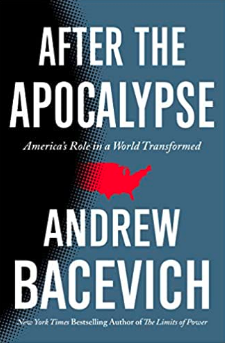 ( Tomdispatch.com) – The bad news stemming from the ill-planned and ill-managed U.S. evacuation of the Afghan capital just kept coming in. The Washington Post put it this way in blowing the whistle on the culminating disaster: “U.S. military admits ‘horrible mistake’ in Kabul drone strike that killed 10 Afghans.”

Following the August 26th terrorist attack outside Hamid Karzai International Airport that took the lives of 13 American troops and dozens of Afghan bystanders, U.S. forces set out to preempt any repetition. Alas, efforts to prevent further U.S. casualties resulted in the killing of innocents, including seven Afghan children. “Horrible mistake” was Defense Secretary Lloyd Austin’s characterization of their deaths.

The result was not what General Kenneth F. McKenzie, Jr., head of United States Central Command (CENTCOM), intended. To his credit, McKenzie did acknowledge that he was “fully responsible for this strike and its tragic outcome.” The four-star Marine general went a step further. In a recorded video statement, he offered his “profound condolences to the family and friends of those who were killed.”

It’s easy enough to understand McKenzie’s sense of remorse. Who wouldn’t have felt dismayed — bummed out, even — that such a humiliating blunder should mark the conclusion of a failed twenty-year war? And just as Uncle Sam was limping toward the exit, hoping to leave with a modicum of dignity intact, Fortune itself seemingly let loose one last gratuitous kick, one final insult to the self-proclaimed greatest military on the planet.

But in this particular context, what does the phrase “fully responsible” even signify? Should McKenzie’s acknowledgment prompt him to offer his resignation? Should he be fired? Would his ouster suffice to make amends for those seven dead children?

Given recent events in their country, it’s hard to imagine Afghans even taking notice of the general’s professed feelings or, for that matter, his fate. As for the American people, most of us have moved on. Afghanistan is already so yesterday.

And that, let me suggest, is a problem. Given our notoriously short national attention span, Americans are overlooking a “horrible mistake” of far greater consequence. I refer to the very existence of CENTCOM.

Created by Ronald Reagan in 1983, it’s presently one of 11 Pentagon “combatant commands” that quite literally span the globe, even extending into the great beyond of outer space and cyberspace. CENTCOM’S earthly area of responsibility (AOR) encompasses 20 nations stretching across the Greater Middle East (and only recently came to include Israel as well). The command’s website spells out the specifics: four million square miles inhabited by more than 560 million people from 25 ethnic groups adhering to myriad religious traditions and speaking 20 languages along with a host of local dialects. In itself, though only one of those 11 commands, it’s already a realm of impressively imperial dimensions.

According to its mission statement, the command “directs and enables military operations and activities with allies and partners to increase regional security and stability in support of enduring U.S. interests” throughout that vast area. Yet while security and stability may describe CENTCOM’s nominal aspirations, its true purpose is quite different. Indeed, the implicit purpose of the entire constellation of combatant commands is to affirm American primacy. CENTCOM exists to demonstrate the enduring necessity of American global “leadership,” expressed in straightforwardly military terms via security commitments, a far-flung network of foreign bases, contingency plans and capabilities, muscle-flexing, and the ever-present possibility of what the Pentagon evasively refers to as a “kinetic action.”

In recent decades, this particular combatant command has garnered more attention than any of the others — and with good reason. Its AOR defines the arena in which American primacy has been most hotly contested. Within CENTCOM’s capacious boundaries, the fate of the post-Cold War American imperium is being decided — indeed, may already have been decided.

Someday, probably decades from now, an ambitious historian will publish a critical history of U.S. Central Command during this era. It will be a big book and it will tell an important tale. One thing is certain, however. Whatever that author decides to title her book, it won’t contain the phrase “Security and Stability.” That it may contain some reference to “Decline and Fall” is a distinct possibility. After all, CENTCOM is where the American empire began to come undone.

The Edsel of Pentagon Commands

Since its creation, 14 generals and admirals have

That exception proved the rule: General H. Norman Schwarzkopf, who commanded CENTCOM during the Gulf War of 1991. As soon as the shooting in that brief campaign stopped, Schwarzkopf wasted no time in stepping down and putting in his retirement papers. The decision proved to be a shrewd one. He thereby dodged the messy aftermath that transformed Operation Desert Storm into something other than the decisive victory it initially appeared to be.

For a brief moment enshrined alongside Gettysburg in a pantheon of American military triumphs, today Desert Storm ranks with the once-celebrated and now long-forgotten Battle of Manila Bay in 1898. True, Commodore Dewey made short work of the Spanish fleet there, just as Schwarzkopf did with the Iraqi army of Saddam Hussein. Yet the ensuing “long war” that eventually pacified the Philippines stuck the United States with a prize of dubious strategic value. Much the same verdict applied to Desert Storm. Liberating Iraqi-occupied Kuwait in 1991 produced little in the way of tangible benefits for the United States.

Painful as it may be for former CENTCOM commanders to admit, the organization’s very existence has coincided with an almost staggering deterioration in regional security and stability throughout the Greater Middle East. The mortifying collapse of the U.S. war effort in Afghanistan 20 years after it began has only served to emphasize the point. Whether things have gone badly due to or in spite ofU.S. efforts may be debatable. Nonetheless, whatever Washington’s intentions or those of the Pentagon, the situation in the CENTCOM AOR has become radically more precarious since 1983.

Indeed, CENTCOM is to Pentagon combatant commands what Ford’s 1950s “car of the future,” the Edsel, was to automobiles. Can there be any question that if CENTCOM were a profit-oriented enterprise, it would have gone belly up long ago?

So as members of Congress and the media try to unearth the roots of the Afghanistan debacle, they might consider this proposition: perhaps the problem lies not with General McKenzie or his long train of predecessors but with what those commanders were charged with doing in the first place. They should consider the possibility that, from the very outset, CENTCOM’s chiefs were engaged in an entirely misbegotten enterprise. If indeed that’s the case, then corrective action should involve something more than replacing McKenzie with another officer inevitably cut from the same cloth.

In other words, CENTCOM should go the way of the Edsel. Retire the logo and the patch. Bequeath the motto — “Persistent Excellence” — to some other federal agency (the Postal Service?) desperately in need of inspiration. Send the command’s collection of plaques, trophies, and other tchotchkes to the National Archives to be catalogued, warehoused, and forgotten. Convert CENTCOM’s

Ford managed just fine without the Edsel. That the United States and the entire Greater Middle East can get along quite nicely without CENTCOM is a hypothesis worth testing. But step number one must be to abolish the command itself.

CENTCOM’s creation expressed a conviction that the United States has interests in the Persian Gulf that are worth fighting for. Arguably understandable in the context of the times — the latter part of the Cold War found the American economy dependent on imported oil — this proved to be a misjudgment of epic proportions.

Today, the United States is no longer dependent on foreign oil. Instead, it faces an urgent need to wean itself from fossil fuels altogether. None of that is to suggest that Washington no longer retains any interests in the CENTCOM AOR. Yet while certain interests still do exist, one thing should be increasingly clear: they are not worth fighting for. Instead, they are worth talking about. In other words, securing those interests should be the subject of diplomacy, with military action only considered in the most extreme circumstances.

“Regional security and stability,” the phrase found in CENTCOM’s mission statement, neatly describes those interests. Making the State Department rather than the Pentagon the lead agency in pursuing those goals would bring an entirely different approach to the forefront.

For too long, U.S. policy in the Greater Middle East has been characterized by reckless miscalculation. Henceforth, in a post-CENTCOM era, its hallmarks should be prudence, patience, and restraint.

Rather than picking sides in regional disputes — Saudi Arabia vs. Iran, Israel vs. Hamas and Hezbollah — the United States should reposition itself as a genuinely honest broker. Rather than chiding some nations for violating human rights and giving others a pass, it should hold all of them (and itself) to a common standard. Rather than flooding the region with advanced weaponry, it should use its influence to reduce arms transfers. Rather than selectively opposing nuclear proliferation, it should do so consistently across the board. Rather than scattering U.S. forces across the region, it should drastically reduce the number of bases it maintains there. At most, two should suffice: an air base in Qatar and a naval facility in Bahrain.

All in all, the United States should lower its regional military profile to approximately what it had been before CENTCOM was created. Going forward, it should be Washington’s policy to defuse conflicts, not fuel them and certainly not to become party to then.

I’m not suggesting that the prescriptions detailed above offer a comprehensive blueprint for “peace in our times.” I am suggesting that it’s past time to stop reinforcing failure. With its implied reliance on coercion as the default expression of U.S. policy in the Greater Middle East, CENTCOM has failed irrevocably.

If policymakers — beginning with President Biden — fancy that the United States has some sort of obligation to “lead,” then they’ll have to reimagine what leading really means. On that score, the lessons of recent decades are unambiguous and undeniable. Invading and occupying countries hasn’t worked. Nor have assassinations, torture, and indefinite detention without trial. As for regime change and nation-building: both have exacted enormous costs (more than $2.3 trillion for the Afghan War alone), while neither has yielded anything faintly like the outcomes promised.

The ultimate “horrible mistake,” to repurpose Secretary of Defense Austin’s phrase, dates from the immediate aftermath of the Cold War when the United States succumbed to a form of auto-intoxication: imperial delusions fueled by an infatuation with military power.

The opportunity now presents itself to change course. Recognizing that the safety and well-being of the American people do not require sustaining a regional U.S. military command that fancies itself called upon to determine the fate of 560 million inhabitants in 21 different countries might just offer a path toward regaining sobriety. After all, recovery begins with taking that first step.