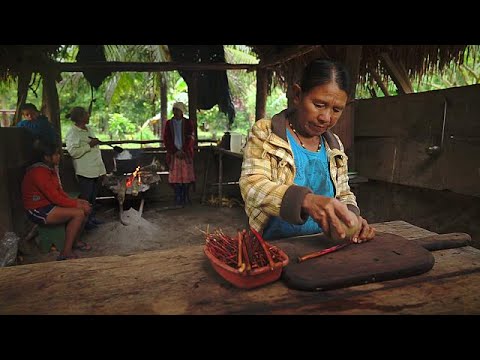 Southwest Harbor, Maine (Special to Informed Comment) – While mainstream media celebrate the remarkable development in record time of vaccines spectacularly effective against the Covid virus, knowledge that might contribute to other medical breakthroughs is being steadily undermined. This decline is not the result of some dramatic lawsuit or corporate takeover. It is one of the effects of the industrial modernization that is supposed to have brought increasing comfort, health and advanced knowledge into our lives. Economic growth has produced not only a climate emergency but a less publicized decline in the many efficacious forms of traditional knowledge and the bodiversity they sustain and are sustained by. In an email exchange I had with ethnobotanist PhD Kirsten Tripplett, she pointed out:

“the generally accepted understanding is that 12-25% of “Western” medicine is derived or based on plant molecules/chemical backbones…It depends who’s talking and what their agenda is. And that is JUST in Western medicine. There are other, much older and empirically-based medicinal systems out there that are incredibly effective, but most U.S. citizens are unaware or only dimly, of them. Not only is the loss of language directly linked to knowledge loss and potential medical/economic loss, but think of all of the practical and useful things that get lost, too.”

When Brazil President- Bolsanaroo encouraged more forestry development in the Amazon, global climate advocates worried about the lungs of the planet and the contribution to global warming. They might equally have been concerned with the indigenous knowledge going up in smoke..

“A study at the University of Zurich in Switzerland shows that a large proportion of existing medicinal plant knowledge is linked to threatened Indigenous languages. In a regional study on the Amazon, New Guinea and North America, researchers concluded that 75% of medicinal plant uses are known in only one language.” She reports that 91% of medicinal knowledge exists in a single language, so the loss of linguistic diversity diminished the former as well.

Nor are medicines all that are lost. She adds,

As indigenous peoples rely on the spoken word for intergenerational knowledge transfer, the disappearance of these languages will take with them a universe of information. The possible losses include fundamental neurological facts about the human brain. Jairus Grove, author of Savage Ecology, cites work by neurologists showing that each language contains a different cognitive map of the human brain. Sometimes the differences are very significant and open up important research potential. Grove cites work by linguist David Harrison on the Uririna people of Peru showing that some, though very few, languages place the object of the sentence at the beginning. Were it not for the continued existence of this people, neuroscientists would not even suspect or know that the human brain could be wired in such a way to make O-V-S sentences possible..

Grove points out that most Indo European languages have a active subject, verb, passive object form, but there are minority cultures that do not express that format. In a world beset by the dangerous exploitation of the natural world these minority cultures may teach us more about how to survive and thrive in this world. In this context Trip[let points out that agency is not confined to the human world The unwillingness to recognize and accept this fact could have increasingly dire consequences.

Dr. Kirsten Tripplett writes, “It’s a long leap conceptually to make, but if one accepts a premise that “language” isn’t just spoken, and that knowledge is transmitted through actions and lifeways, then loss of biological species and their exploitation to serve human interests, is a critical loss, too, for the same reasons as those cited above . . .”

Grove has similar worries: “Irreversible catastrophic changes are certain but extinction is unlikely. What we stand to lose as a species in this current apocalypse of homogenization is unimaginable , not because of the loss of life but because of the loss of difference. Who and what will be left on Earth to inspire and ally with us in our creative advance is uncertain. If the future is dominated by those who seek to establish the survival of the human species at all costs through technological mastery then whatever “we” manages to persist will likely live on or near a mean and lonely planet.”(Savage Ecology, p. 209)

Why this loss of cultural diversity? There is first the reductionist tendency to treat cultural diversity and biodiversity as separate issues rather than as continuously interacting. Zanon further quotes Jordi Bascompte: “We can’t ignore this network now and think only about the plants or only about the culture . . . We humans are very good at homogenizing culture and nature so that nature seems to be more or less the same everywhere.”

This homogenization process includes reduction of human labor to cogs in a corporate machine, to cookie cutter development to the planned obsolescence and corporate dominated consumer culture. Most important is a neoliberal financial system fostering increasing wealth gaps within and among nations. In this context it is especially important to preserve alternative ways of being in the world and their origins and history. Despite efforts to homogenize many indigenous cultures some retain their vitality. But their survival will depend on bottom- up activism and rules, laws, and practices negotiated across race, ethnicity, religion and class.

As Subhankar Banerjee argues, saving elephants in different states presents complex problems. More broadly biodiversity conservation is contextual. What works for one place and in a particular culture may not work for another place and in another culture. This is not, however, cultural relativism. Biodiversity advocates value most those cultures that seek space for difference and for a politics that celebrates that end.

Banerjee again: “”What makes biodiversity conservation so beautiful is that it is a pluriverse—so many ideas, so many practices, so many forms of human-nonhuman kinship that exist around the world, which in a different context, a quarter-century ago, Indian historian Ramachandra Guha and Spanish ecological-economist Juan Martinez-Alier called Varieties of Environmentalism.”

To help indigenous peoples worldwide preserve, revitalize and promote their languages, UNESCO has launched its Decade of Action for Indigenous Languages from 2022 to 203. This is a principle worthy of much more attention than it receives. For that situation to change more than proclamations of rights will be necessary, including political movements celebrating and willing to fight for economic justice and biological and cultural diversity.

Euronews: “Inside the rainforest’s medicine cabinet”