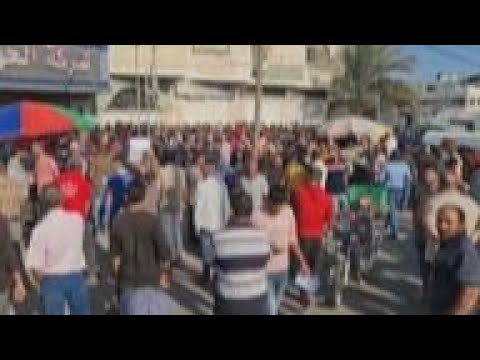 ( Middle East Monitor ) – Even the Israeli journalist, Gideon Levy, couldn’t bear the tragic scene of thousands of Gazans scrambling to reach the window to apply for work in the territories it occupied in 1948.

He wrote in Haaretz newspaper on 10 October: “This image should haunt every Israeli, wherever they may go. Haunt them, disturb their sleep, torture their conscience, destroy their peace of mind. A mass of people crowding in front of the chamber of commerce in the Jabaliya refugee camp, in a desperate attempt to get a permit to work in Israel.”

Levy courageously made statements against the Israeli behaviour in his article ‘One Image, 2 Million People Stripped of Their Dignity‘. He wrote about the crowded Gazans, “The hands outstretched, as though someone’s long arm will help him to reach his dream. But it is Israel’s long arm, serving these people all these ills. For decades Israel has abused them, their parents, and their children. There is no place like Gaza to tell this story of evil, from the expulsion and flight in 1948, through the reprisal actions and the conquests to this 15-year siege. This is Israel’s true long arm, which shapes its moral profile.” Levy sums up the article by saying, “Israel bears a heavy responsibility for their fate.”

Gideon Levy has written about Israel, and he is brave enough to condemn its immoral and fascist behaviour as an occupier. Who are we writing about? Who should we hold responsible alongside the occupation? Three parties share responsibility for the pain and hunger suffered by the Gazans:

First, the Hamas movement, which dominates and monopolises the management of the Gaza Strip. It has failed to present Gaza as a model to follow in management, acknowledgment of pluralism, and to yield to the requirements of partnership between the various political and social forces in managing the Gaza Strip.

Partnership and the distribution of tasks will make the various political parties look for opportunities to improve life, in light of the deliberate Israeli siege and starvation. A partnership can only be achieved through municipal, union, and student elections. The external siege is imposed by Israel, while the internal siege and silencing are unfortunately imposed by Hamas.

Second, the Palestinian Authority in Ramallah, which is supposed to be the representative, sponsor, and decision-maker, and bears the responsibility of the people in the West Bank and the Gaza Strip. Instead, it imposes procedural sanctions on the people of the Gaza Strip, including the bases of the Fatah movement, the political party that leads the Ramallah authority.

Third, the Arab and Islamic countries, which should act as forces supporting the Palestinian people, and providing them with opportunities for steadfastness, survival, and dignity in the face of Israel, its occupation, brutality, and fascism.