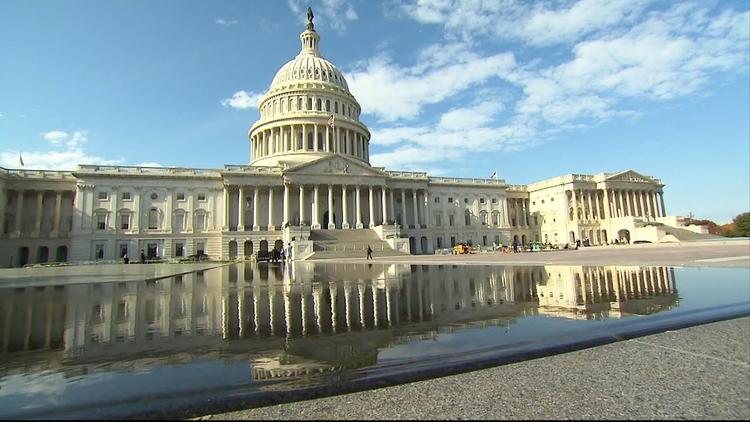 By Diannie Chavez and Brenda Rivas | –

( Cronkite News ) – WASHINGTON – Arizona Sen. Kyrsten Sinema’s refusal to back the Biden administration’s $3.5 trillion social and clean-energy spending package has made her a target for Democrats – and possibly “the most powerful person in Washington right now,” one analyst said.

It’s not the first time that Sinema, a Democrat, has bucked her party on high-profile measures that need every Democratic vote to pass in the evenly divided Senate.

That has brought scorn from Democrats in Washington and Arizona, with the state party this month threatening to formally censure her if she “continues to delay, disrupt or votes to gut” party priorities.

But it has also landed Sinema numerous meetings with the president this week and led to surprisingly high support for her among Arizona Republicans, according to a recent survey.

It’s a balancing act, but one that has “all eyes … on Sen. Sinema,” said Mike Noble, chief of research at OH Predictive Insights.

Eyes are currently on Sinema and Sen. Joe Manchin, D-W.Va., two centrists who have said the $3.5 trillion price tag is too high for President Joe Biden’s “Build Back Better” plan, a domestic spending plan that calls for everything from free community college and child care to clean-energy and housing projects. The White House insists the plan will be paid for in full by tax increases on high earners and corporations.

The House has already approved the plan, but with the Senate evenly divided and Republicans dead-set against the measure, Democrats cannot afford to lose any votes. Which makes Manchin, a senator from a small state, and Sinema, a relatively junior member of the Senate, suddenly more important.

Biden has met one-on-one with both Manchin and Sinema repeatedly in recent days, trying to broker a deal.

“The president’s role and work in communicating with Sen. Manchin and Sen. Sinema to help get that done is probably one of the most constructive roles he can play,” White House Press Secretary Jen Psaki said Thursday. “And that’s what he’s been focused on over the last few days.”

That has done little to calm progressives in the House, who have threatened to block a popular $1.2 trillion infrastructure bill that would fund roads, ports, transit and other projects, unless they get assurances that Manchin and Sinema will get on board with the Build Back Better plan.

Several accused Sinema in news reports this week of refusing to negotiate in good faith, charging that she has not told Biden or Senate leaders exactly what she wants.

That led to a testy statement Thursday from Sinema’s office, which said she had “shared detailed concerns and priorities” in August with the White House and Senate Majority Leader Chuck Schumer, including a statement that she could not go along with the $3.5 trillion price tag. Claims that she has not shared her views with Schumer and Biden “are false,” the statement said.

“While we do not negotiate through the press … (Sinema) continues to engage directly in good-faith discussions with both President Biden and Sen. Schumer to find common ground,” the statement said.

But her positions – including a refusal to do away with the Senate filibuster and a vote earlier this year against a federal $15-an-hour minimum wage – have made her increasingly unpopular with progressives back home.

A recent poll by OH Predictive Insights found that 46% of Arizona voters had a favorable opinion of Sinema, compared to 47% for Arizona Democrat, Sen. Mark Kelly. The survey of 882 Arizona voters was taken from Sept. 7 to 12 and had a 3.3% margin of error.

But while Kelly was viewed favorably by 80% of Democrats surveyed, just 56% of Democrats felt the same way about Sinema. And 40% of Republicans viewed Sinema favorably to 20% for Kelly, more of what the survey called her “quite interesting” numbers.

“Republicans haven’t had an excuse to not like her so far,” Noble said. “But if she were to vote for this (Build Back Better) bill, it would be very hard for her to get back to the current level she’s at.”

Despite pushback from her party, Sinema is not under the same pressure as other Democrats who are up for re-election next year. Her term runs through 2024, giving her plenty of time to turn her numbers around, Noble said.

That was echoed by Nathan Gonzales, editor and publisher for Inside Elections.

“Democrats feel a sense of urgency to not just help the American people, but to have something tangible to show voters what they have done with the power voters gave them,” Gonzales said, urgency that is not present for Sinema.

“Ultimately, the political impact of her maneuvering won’t be known for another few years since she’s not going to face voters until 2024,” Gonzales said. “That’s the ultimate test of how voters view her actions during this negotiation process.”

Sinema did not respond to requests for comment for this article. And while Manchin has spoken and written in the media on his concerns about the bill, Sinema has been mostly silent with the public.

But Laura Rodriguez, legislative director for the Center for American Progress, said, “That’s just the way that she functions.”

“She is very clear that she doesn’t like to negotiate in the press. She negotiates with her colleagues,” Rodriguez said.

While Sinema “shouldn’t have to give every single detail of every single thought,” a little more communication could be helpful, Rodriguez said. But she said Sinema’s reticence also keeps her from painting herself into a corner.

The fact that she has continued to talk with the president is a good sign, Rodriguez said.

“This is a really complicated issue that has been made a lot more complicated by a lot of the negotiating in public,” Rodriguez said.

In two decades of working in and around Congress, Rodriguez said she “has never seen anything like this,” and that the “second-by-second twist and turns have heightened the temperature.” But it’s important to remember, she said, that legislating can be a long, drawn-out process.

“If the vote were to happen today and it were to fail, it’s important to realize that will only be another step in the journey of getting the bill done,” she said.

Diannie Chavez is a visual journalist completing her bachelor’s degree in journalism. Chavez, who interned at Phoenix Magazine, is a visual reporter for the D.C. News Bureau.

Brenda Rivas expects to graduate in December 2021 with a bachelor’s degree in journalism and mass communication and a minor in business. Rivas, who has interned with Voyage Productions, is working in the Phoenix News Bureau.