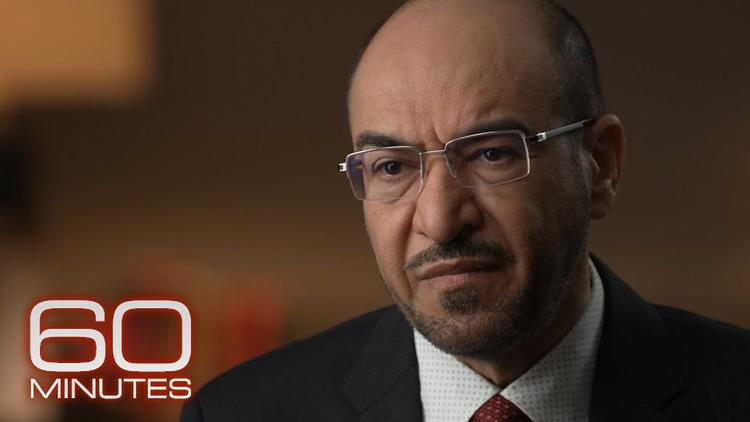 Ann Arbor (Informed Comment) – Scott Pelley at CBS’s “60 Minutes” interviewed Dr. Saad al-Jabri, the number 2 man in Saudi intelligence until 2014, when he fled for his life to Canada.

Al-Jabri made a number of serious accusations against Crown Prince Mohammad bin Salman (MBS), the de facto ruler of Saudi Arabia, including alleging that MBS sent a hit team or “Tiger Squad” to Toronto to assassinate him. This attempt was made soon after the October 3, 2018 murder in the Saudi consulate in Istanbul of dissident Washington Post columnist Jamal Khashoggi.Al-Jabri says that he was warned by an old friend in Saudi intelligence not to go near any Saudi consulate or embassy because he was next on the list. He says this was before Khashoggi’s murder had become known.

As a former spy who lied for a living, who stands accused of embezzling $500 million from the Saudi counter-terrorism budget, al-Jabri’s credibility cannot be taken for granted. Some of what he says, however, seems to be corroborated by the Canadian government, according to Pelley.

Pelley brought on former CIA deputy director Mike Morrell to testify that al-Jabri worked closely with American intelligence on counter-terrorism in the Obama era and was responsible for foiling an al-Qaeda plot to blow up airplanes by slipping bombs into desktop printers in the cargo hold. Morrell said that there were many other such instances where al-Jabri’s help was crucial but that they remain classified.

Al-Jabri alleged that in 2014, in a meeting with then Minister of the Interior (i.e. intelligence) Prince Mohammed bin Nayef, Mohammed Bin Salman said that he wanted to kill King Abdullah. He allegedly remarked that he could procure a poisoned ring from Russia and that when he shook hands with the king, it would kill him. King Abdullah died of natural causes soon thereafter, on 23 January 2015, and was succeeded by MBS’s father, Salman b. Abdulaziz, King Abdullah’s half brother.

Personally, I seriously doubt that if you were seriously thinking of knocking off the king, you would tell his chief intelligence officials about it, and this story seems wholly unlikely to me.

Al-Jabri also said, in a clip aired on YouTube in 60 Minutes Overtime (see below) that he once asked Bin Salman what he wanted to be, and he alleges that the prince replied, “Have you heard of Alexander the Great”?

Al-Jabri was implying with this anecdote that Bin Salman has ambitions to conquer other countries. While he may have delusions of grandeur, however, MBS so far hasn’t had much of a record as a conqueror. He launched the war on Yemen in the spring of 2015, which turned into a quagmire from which he has yet to extricate himself. He never committed significant Saudi troops to the war effort, pursuing it from 30,000 feet with air strikes. Saudi Arabia’s citizen population is small, 20-some million, and it cannot credibly mount wars in the region. So al-Jabri’s apparent interpretation of the remark is not likely.

So it seems to me that the most believable allegation al-Jabri made is that MBS sent a Tiger squad hit team to kill him in Canada. Al-Jabri made this charge publicly a little over a year ago. The CBC says that the Canadian government seemed to confirm it, writing “Public Safety Minister Bill Blair would not comment on the specific allegations in the lawsuit but said the government was aware of incidents in which foreign actors have tried to monitor, intimidate or threaten Canadians and people in Canada. ‘It is completely unacceptable, and we will never tolerate foreign actors threatening Canada’s national security or the safety of our citizens and residents,’ Blair said in a statement. ‘We invite people to report any such threats to law enforcement authorities.'”

So there really weren’t any new allegations in al-Jabri’s interview that are particularly credible, as far as I can see. Of course, if MBS is sending hit teams to kill people in North America, that is a matter for alarm in Ottawa and Washington, D.C.

MBS’s control of Saudi Arabia’s trillions of dollars in reserves and its sovereign wealth fund, however, makes him indispensable, and after stonewalling him for months, President Biden recently sent National Security Adviser Jake Sullivan to meet with MBS on ending the Yemen war. In his presidential campaign, Biden had threatened MBS with “consequences” and seemed to pledge to have nothing to do with him.

Since Bin Salman is likely to be king within the decade, both the U.S. and Canada will want to keep on his good side while doing what they can to discourage his attempted killing spree against their residents. So I fear that if Mr. al-Jabri felt he could sideline the crown prince with this interview, he may as well not have bothered. I wish I could be more optimistic.

Henry Kissinger, the arch-Realist, said that diplomacy is a game played with the pieces on the board. MBS is a piece on the board.