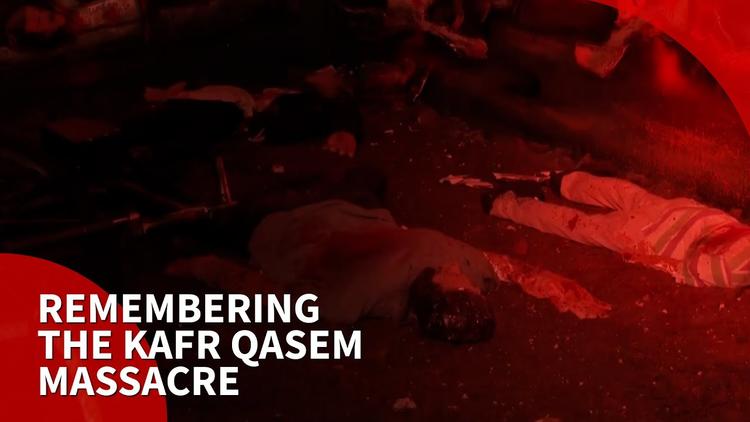 In one of the worst massacres in Palestinian history, Israeli border police killed forty-nine residents of Kafr Qasem, including women and children

( Middle East Monitor ) – Israel’s seemingly never-ending drive to uproot Palestinians from their homes by force of arms and threat of imminent slaughter resulted in one of its bloodiest massacres on 29 October 1956 in the village of Kafr Qasem, on the Israeli side of the 1949 Armistice (“Green”) Line.

In one of the worst massacres in Palestinian history, Israeli border police killed forty-nine residents of Kafr Qasem, including women and children, in an hour-long killing spree aimed at terrorising Palestinians into uprooting themselves and leaving their homes, thus triggering another wave of ethnic cleansing.

The massacre was carried out on the same day as the botched Suez Campaign, in which Israel, Britain and France conspired to topple Egypt’s Gamal Abdel Nasser in order to regain control over the Suez Canal, which the then Egyptian President had nationalised three months earlier. The hope was that a major international conflict would divert attention and provide sufficient cover for the occupation state to expel more of the indigenous population in its unrelenting takeover of Palestine.

Already living under military rule following Israel’s first wave of ethnic cleansing when it was created in Palestine in 1948, a curfew was imposed by the occupation state at 4:30pm on twelve Palestinian villages, including Kafr Qasem. Hundreds of villagers who had left home in the morning to go to work had no way of knowing that a curfew was in place. Soldiers tasked with enforcing the curfew were ordered to shoot and kill anyone seen outside after 5pm, making no distinction between men, women, children and those returning from outside the village.

Predictably, Palestinian residents returning to their homes after the 5pm deadline were stopped by the border police on the western side of the village. Soldiers forced them out of their vehicles and ordered them to dismount from their bicycles before shooting them at close range. In just under an hour 49 people were killed, including women and children.

According to Palestinian historians, the massacre at Kafr Qasem mirrored the typical Israeli blueprint of terrorising Palestinians into fleeing. In his book Atlas of Palestine, 1917-1966, Dr Salman Abu Sitta lists at least 232 places where atrocities, massacres, destruction, plunder and looting were carried out by the Zionists between 1947 and 1956. Almost every one of thirty military operations were accompanied by one or two massacres of civilians. There were at least seventy-seven reported massacres, half of which took place before any Arab regular soldier set foot in Palestine during the 1948 Israeli-Arab war.

The pattern of expulsion was consistent, regardless of the region, date or the particular battalion involved in attacking a town or village. The imposition of a curfew was common practice prior to a massacre. Villagers would be gathered in the main square or nearby field in separate groups, while the village itself was surrounded on three sides, leaving the fourth open for escape or expulsion. The gap left open for Palestinians to flee in the Galilee region pointed towards Lebanon and Syria; towards the West Bank and Jordan in central Palestine; and towards Gaza and Egypt in the south.

It was two weeks before reports of the massacre were published in the local media; it took a further eleven days before the grisly details were covered by the international media. The army eventually put eleven soldiers on trial for the murders; in October 1958, eight of them were found guilty and sent to prison. By November 1959, however, all were freed, their sentences having been commuted by President Yitzhak Ben-Zvi Shadmi, who was also tried for murder, but acquitted.

In the 65 years since the carnage in Kafr Qasem, Israel’s approach to what happened has been complex. There was the usual prevarication and attempts to downplay it by blaming the massacre on rogue soldiers who should have known better than to obey a “blatantly illegal order”. This was contradicted by Yiska’ Shadmi, the most senior Israeli officer tried for the Kafr Qasem killings. Shadmi, who died in 2018, admitted before his death that his trial was staged to protect military and political elites in connection with the massacre in Kafr Qasem.

Historian Adam Raz is the author of Kafr Qasem Massacre: A Political Biography. He believes that behind the horrific 1956 event was a secret plan to expel (“transfer”) Israel’s Palestinian citizens from the much-coveted territory known as the Triangle in central Palestine.

Although former Israeli President Shimon Peres apologised for the massacre in 2007, residents and victims have been seeking state recognition of what took place on that fateful October day in 1956. This week, one Arab member of the Israeli Knesset (parliament), Minister for Regional Cooperation Issawi Frej, proposed that the state should formally accept responsibility for the massacre, memorialise its victims, include it in the school curriculum and order the still-classified documents relating to it to be made available to the public.

Frej, who is a resident of Kafr Qasem, has been proposing a bill since 2013 calling for Israel to officially recognise the massacre and honour those killed and wounded. The latest version of that bill put forward by the Palestinian Arab bloc of MKs known as the Joint List, was voted down once again in the Knesset on Wednesday.

Nasim Ahmed is a London-based writer and commentator on the Middle East and political Islam.