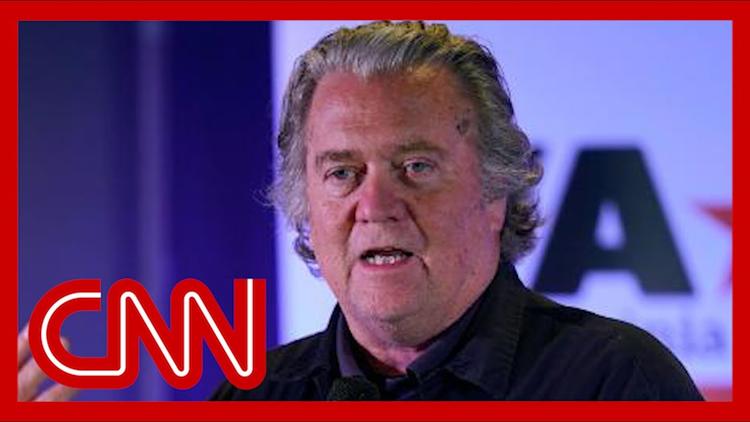 Ann Arbor (Informed Comment) – Anyone who knows the history of abuse in the Congress’s prerogative of subpoenaing witnesses and holding people in contempt for declining to testify is a little uneasy about the vote today to refer far-right gadfly Steve Bannon to the Department of Justice on charges of contempt of Congress.

Mary Clare Jalonick at AP reports that the vote was 229-202. Of the 213 Republicans, all but 9 voted “no” on the motion to hold Bannon in contempt. That is, the 202 “no” votes were all Republican representatives.

Claudia Grisales at NPR reports that Banks further observed, “Steve Bannon was a private citizen before, after and during January 6. So why is the select committee interested in Steve Bannon? It’s simple. He’s a Democrat party boogeyman.”

The argument that Congress can’t investigate U.S. citizens clearly holds no water. And, since the January 6 Committee is investigating the Capitol Insurrection, which was carried out by private citizens, it is hard to see why Bannon’s status as such should protect him from testifying. Bannon, on the contrary, said he declined to testify on the grounds of executive privilege, though he did not have his lawyer formally make that or any argument at all about his refusal to come to the Hill. Since he wasn’t a government employee, executive privilege is unlikely to apply, in any case. If Banks is saying that Congress never has the right to subpoena private citizens, that would be new, as you’ll see below.

Jalonick at AP quotes Rep. Liz Cheney (R-Wy), “Mr. Bannon’s own public statements make clear he knew what was going to happen before it did, and thus he must have been aware of — and may well have been involved in — the planning of everything that played out on that day. The American people deserve to know what he knew and what he did.”

So 202 Republican representatives were saying that it is all right for a far, far right supporter of insurrection who idolizes Fascist dictator Benito Mussolini (who was responsible for killing thousands of U.S. and allied troops) to possibly help plan out the overthrow of the US government and then to refuse even to show up for questioning in Congress.

The current Republican Party (with few but notable exceptions such as Rep. Cheney her 8 defecting colleagues) stands for the principle that being a Fascist means never having to say you are sorry.

The Rocky Mountains-high extent of the Republican hypocrisy is clear if we consider that in 1947 most GOP representatives voted to hold Hollywood film people in contempt for declining to say whether they had ever belonged to the Communist Party or not. They even issued a contempt ruling against the famed leftist playwright Bertolt Brecht, then doing screenwriting in Hollywood. Brecht is now known to most Americans mainly as the author of the lyrics for the song “Mack the Knife” in the 1928 play “Threepenny Opera,” which were translated into English in 1954; the song became a Bobby Darin pop hit. Brecht got on a plane for East Berlin the day after the citation and so escaped.

When the remaining Hollywood 10 were called to testify about whether they were or ever had been members of the Communist Party, they invoked not their fifth amendment right not to incriminate themselves but their first amendment right to believe as they pleased. Although it was a talking point on the American right wing and maybe even center that all Communists were guilty of trying to overthrow the U.S. government, this allegation was manifestly not true and was even faintly ludicrous. At its height in the late 1940s, the US Communist Party only had 75,000 members. Many had joined in the Great Depression, when the drawbacks of capitalism were on full display, and remained through WW II, when the US government was actively allied with the Communist Soviet Union and with Communist anti-fascist resistance undergrounds in places like France. The Communist French underground not only sabotaged the Nazis and Vichy but slipped bronze to Picasso, a fellow Communist in Paris, for his sculptures.The sudden advent of the Cold War and the hysteria of figures like Dick Nixon and Joe McCarthy in Congress after 1945 whipsawed these American Communists, who suddenly found themselves criminalized for something that had earlier been merely risque.

Congress denied that there was any first amendment right not to tell it about your political past, and the courts upheld it. The Hollywood 10 ended up being sentenced to a year in prison each, and even after they were let out they were blacklisted in Hollywood. One of the ten, Dalton Trumbo, went on secretly writing scripts under pseudonyms and one of these won the Academy Award in 1955. Trumbo, who himself had no respect for freedom of speech in the 1940s, left the party in the late 1950s and went on to critique his youthful self for having been doctrinaire. That intolerance shouldn’t have resulted in a prison sentence, though. The 2015 Jay Roach film, “Trumbo,” is very much worth seeing for it evocation of this era, though it has been criticized for leaving out Trumbo’s dark side.

The Republicans controlled the House by 246 to 188 in 1947, and representatives of both parties voted overwhelmingly to hold the Hollywood 10 in contempt of Congress for not testifying about their party membership. Mind you, these were private citizens just like Steve Bannon. The big difference is that he may actually have been involved in a real insurrection attempt, whereas the Hollywood 10 merely created leftist films.

Athan G. Theoharris shows that behind the scenes the FBI had put Hollywood under surveillance at J. Edgar Hoover’s orders. Seven films made or set in WW II referring to the US alliance with the Soviet Union were tagged as products of Communist influence, including “Mission to Moscow,” “Action in the North Atlantic,” “Hangmen Also Die,” “Keeper of the Flame,” and “Edge of Darknes.”

“Hangmen also Die” is a noir war film directed by Fritz Lang and based on a Brecht short story, about a Czech partisan who assassinates a brutal Nazi occupation official. I don’t think I’ve seen it, but it just went on my list. It helped get people put in jail.

In the 1950s, I have explained elsewhere, the Seattle 7 were arrested merely for thought crimes and labor organizing without even having to tangle with Congress. The Supreme Court initially upheld their conviction but in 1957 reversed itself and held that you have to actually do something, not just believe something, to be charged. That ruling began the unraveling of McCarthyism and by the 1960s the Hollywood blacklist petered out and Dalton Trumbo could work openly again, though by this time anyway he had been disillusioned by Nikita Khrushchev’s revelation of Joe Stalin’s crimes.

So if Congress had held Bannon in contempt for refusing to tell them about his Fascist political convictions or who he palled around with in the past, I’d be with Rep. Banks in criticizing that. If Lynn Cheney is right, however, that Bannon may have played a role in the Capitol Insurrection, well, that was a practical conspiracy to kill representatives and stop the certification of Joe Biden’s election as president, and judges are already sentencing people for playing a role in it. It wasn’t just speech.

But if the Republican caucus in Congress wants to come out now and apologize for what their party did to the Hollywood 10, and declare that American Communists should never have been investigated or jailed merely for their beliefs, they’d at least be consistent.

As it is, they are wretched hypocrites and sophists, with a double standard when it comes to violent Fascists.