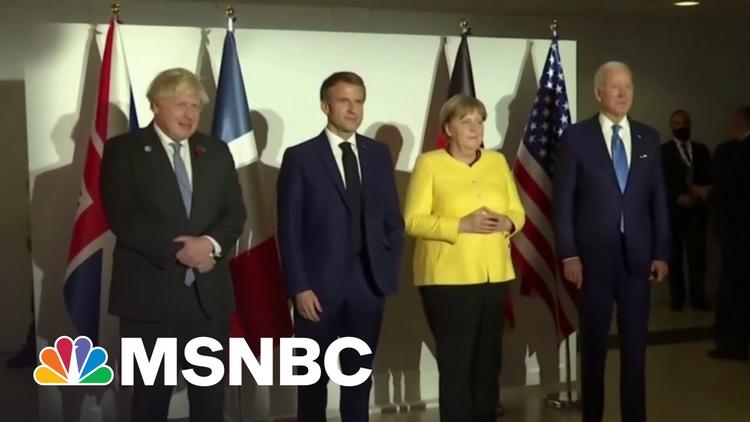 Ann Arbor (Informed Comment) – Diplomacy is the art of the possible, and so far the Biden administration isn’t showing a mastery of that art when it comes to Iran and restoring the Joint Plan for Comprehensive Action (JCPOA) or 2015 nuclear deal.

President Joe Biden has not made restoring the nuclear deal a top priority, though on Saturday he and European leaders at the G20 meeting in Rome issued a joint communique on the need to restore the deal. In that connection, Biden offered Iran relief from US sanctions if it returned to abiding by the terms of the original agreement, according to Chris Megerian at the Los Angeles Times. Russia and China were not involved in this joint statement.

Here’s what is wrong and how it can be fixed.

1. It isn’t very likely to happen, but Washington has to realize that it is in the wrong. The original 2015 JCPOA offered Iran sanctions relief if it abided by the terms of the treaty.

The US never offered significant sanctions release, but went on interfering in other countries and their firms investing in Iran, threatening them with sanctions. Even so, Iran faithfully observed the provisions of the JCPOA and the UN International Atomic Energy Agency attested to that compliance. Iran did so in 2016, 2017 and 2018. The deal wasn’t done for Iran’s health. Tehran agreed to it for the sanctions relief. That never came because the Republican Party blocked it in Congress.

Then in May, 2018, Trump abruptly pulled the US out of the JCPOA and slapped a full financial and trade embargo on Iran, stopping its ordinary trade with third countries like South Korea and Japan and devastating its oil exports. This was done despite Iran’s observance of the terms of the treaty, which it went on doing through 2018 even though the US stabbed it in the back. What Trump did through banks and Treasury Department threats would have been an act of war if he had used the navy to blockade Iran’s oil exports.

Biden has been saying that if Iran goes back into compliance, he will lift Trump’s sanctions down the road.

Iran has been here, in 2016, 2017, 2018, and it never happened. Why should Tehran believe in Biden’s sincerity? Can he even hope to get sanctions relief through Congress when he can’t get his own agenda passed? What if he loses in 2024. Will Trump’s blockade be re-instituted, even if Iran is on good behavior?

The Iran daily Keyhan, close to Khamenei, denounced Iranian reformists for pushing for one-sided concessions to the US, according to BBC Monitoring.

2. It isn’t clear whether Biden was saying in Saturday’s statement that he will lift sanctions first as a good faith gesture. If so, that is the right way forward, because progress requires that Biden lift Trump’s sanctions immediately. There was no reason for their imposition, since they were put in place while Iran was in compliance with the JCPOA. Some of those blockades are war crimes, since they interfere with ordinary civilians getting medicine and humanitarian aid. Biden’s team is the Blob incarnate and apparently they have gotten to like the Trump blockade on Iran and to imagine, as he did, that it will bring Iran to its knees on the nuclear issue but also on all the other Iranian policies that the US does not like. Trump was wrong and the Blob was wrong, and if Biden wants progress he has to tell them to sit down and shut up. Ayatollah Ali Khamenei simply is not going to scale back Iran’s civilian nuclear enrichment program unless he sees a practical sign of earnestness from Biden, and so far there has been none.

3. The Obama administration made the right decision to exclude all issues from its negotiations with Iran except the civilian nuclear enrichment program. Iran is from the US point of view a bad actor in the Middle East. It propped up a Syrian government that Washington would just as soon see fallen. It is developing drones and ballistic missiles. Its support for the Helpers of God (Houthis) in Yemen is seen as threatening by US ally Saudi Arabia. Tehran talks dirty about Israel, although it does not appear actually to have backed up the big talk with any significant action. It does support the Lebanese party-militia Hezbollah, which Lebanese see as a shield against Israeli aggression and occupation, but which the US brands a terrorist organization.

All of those issues have to be set aside if the JCPOA is to be reactivated. They can be important issues (though some, like Iran’s supposed activities in Yemen, are vast exaggerations), but they will have to be dealt with down the road and with different tools. If Iran’s civilian nuclear enrichment program is the most important issue, then treat it as such.

The Biden administration is acting as though the Iran issue is a low priority. The attitude seems to be that if Iran wants to go back into compliance, we’ll see what we can do for them. Maybe. Maybe, we’ll just screw them over anyway.

In actuality, the US is on a war footing with Iran and is strangling its economy with no shred of justification in international law. It is dangerous to back an enemy into a corner that way, and wars have been started by less.

Biden is risking conflagration in the Middle East that could spiral out of control at the drop of a hat.