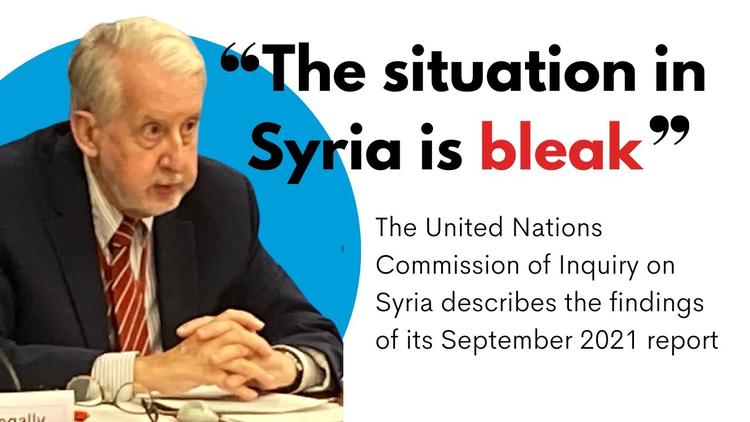 The hasty and badly organised US withdrawal from Afghanistan in August prompted fears among Washington’s other allies about the durability of US friendship. Kurdish troops in northeastern Syria, facing multi-pronged opposition from Islamic State fighters as well as the Assad regime and the prospect of Turkish incursion, have felt particularly vulnerable.

So recent meetings between senior US officials and the Kurdish-led Syrian Democratic Forces (SDF), which resulted in a pledge by US president, Joe Biden, that the US would not abandon them have gone a long way to allaying those fears.

There are about 35 million ethnic Kurds living in Kurdistan, an area comprising parts of northeastern Syria, northern Iraq, southeastern Turkey and western Iran. At various times groups in different parts of this area have pressed for independent statehood, but on the whole the majority – at present, at least – are relatively content to occupy autonomous regions. In Syria this is the Autonomous Administration of North and East Syria (AANES) otherwise known as Rojava.

US involvement in Syria and military support for the Kurdish-led forces has paid significant dividends for both sides. Supported by around 2,000 US troops on the ground and an air campaign, the SDF has proved to be an most effective buffer against Islamic State in Syria and played a decisive role in ending its territorial control in March 2019.

But there has been an ever-present fear that the US will pull out, leaving them at the mercy of their enemies. This fear was stoked in October 2019 when former president Donald Trump ordered US troops to withdraw from the region, effectively giving the green light to a Turkish invasion and capture of a large area of AANES territory. In the event, Russia brokered an agreement between Turkey and SDF. Turkey got a safe zone along the border and SDF agreed to withdraw 20 miles south of the border. The US, meanwhile, maintained enough of a military force to continue supporting the Kurds’ efforts to stabilise the region. But the possibility of an abrupt US withdrawal has been shaping Kurdish actions ever since.

The election of Joe Biden in November 2020 raised the hopes that the US would adopt a steadier approach in its dealings with the Kurds in Syria. And it seems that, on appearances at least, the US is willing to do so.

Meetings between US state department officials and the SDF leadership in August and September 2021 ended with the US emphasising its “commitment to the campaign against ISIS and stability in the region” and assuring the SDF that “there will be no changes in Syria” in the aftermath of the US withdrawal from Afghanistan.

What’s in it for America

The US military support and security umbrella it provides may have been a critical factor behind the Kurds’ success, but safeguarding Kurdish gains is not the reason behind the Biden administration’s decision. There are several other factors at play. Firstly, the threat posed by Islamic State in Iraq and Syria continues, despite the group’s loss of its territorial control. Iraq’s short and medium-term security and stability remains a key US priority and an abrupt withdrawal from Syria would aid the resurgence of IS in Iraq.

The US military presence in Syria is also needed to curb Iran’s influence in both Iraq and Syria and address the security concerns many US allies – particularly Israel – in the region feel as a result.

The continuation of the US military support and financial aid is crucial to the region’s stability and could act as a springboard for accommodating Kurdish rights and the inclusion of the AANES into Syria if political pluralism and a decentralised governance model is accepted.

AANES’s prospects are closely tied to its inclusion in the UN-led peace process for ending the civil war in Syria. So far, its efforts have not managed a seat at the table. A more concrete commitment from the US in the form of political support for the inclusion of AANES representatives at the UN peace talks could change the situation in its favour.

But AANES has more urgent concerns. Turkey continues to threaten, seeing the SDF as an extension of the Kurdistan Workers’ Party (PKK) guerrillas that it has been battling in Turkey and Iraqi Kurdistan since 1984. Turkey invaded the Kurdish-controlled regions of Syria in 2018 and 2019, and small-scale attacks by Turkey and Turkish-backed Syrian groups on the rural areas of AANES territory continue daily, as do the human rights violations committed against the Kurdish civilians in the areas under the control of the Turkish-backed Syrian groups. On August 19, drone attacks by Turkey killed three SDF commanders and two fighters.

Eliminating the influence of the SDF in Syria remains a key objective for the Turkish president, Recep Tayyip Erdoğan. But the US presence, and its commitment to the region’s stability, will act as a deterrent against a new large-scale Turkish military operation. Previous Turkish attacks in the AANES territory were made with Russia’s tacit support and encouragement, something which is thought less likely to be granted now the US has clearly stated its support for the SDF. And US troops on the ground in eastern Syria will also deter the Assad regime from destabilising AANES in a bid to take its territory back under full control.

US military support means Turkey’s attempts to label the SDF as “terrorists” are less likely to succeed. Erdoğan has used Turkey’s military operations against the Kurds in Syria as a sop to his strongly nationalist base – and he has repeatedly used western support for the Kurds as an example of the west’s antipathy towards Turkey.

With the likelihood of a Turkish military operation lessened, Erdoğan’s ability to please nationalists with an easy victory against the Kurds is less likely. Erdoğan retains a firm grip on power in Turkey, but there are reports that Turkey’s opposition parties are working with Kurdish groups. If a united opposition can inflict defeat on Erdoğan’s Justice and Development Party in the next election in 2023, then this would be one more step towards a peaceful future for the Kurds.

This syndicated article does not necessarily represent the views of Informed Comment.

UN Human Rights Council: “Syria: The conflict is getting worse, says the UN commission of inquiry”