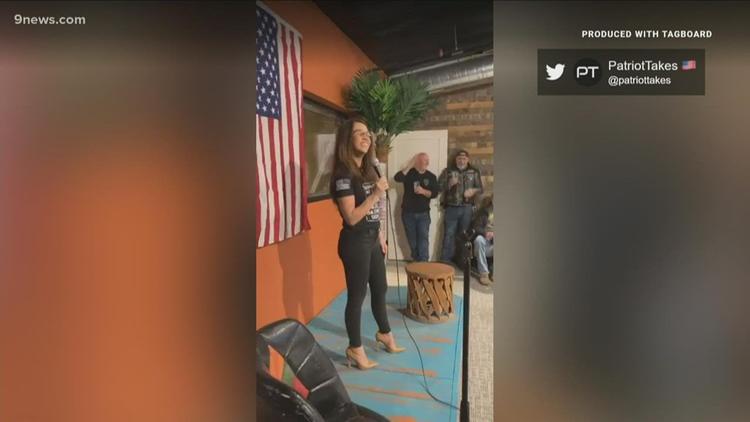 The taunt was ironic given that Hunter Walker at Rolling Stone reported that Boebert was one of a handful of representatives on the Hill who repeatedly met with conspirators planning the January 6, 2021, Capitol Insurrection in which angry armed mobs invaded the halls of Congress chanting “hang Mike Pence” and seeking to harm legislators.

Walker said of his two two top sources within the insurrectionists, “Rolling Stone has separately obtained documentary evidence that both sources were in contact with [Arizona Rep. Paul] Gosar and Boebert on Jan. 6.”

On Jan. 6! That is, while the insurrection was taking place!

That is, Boebert is the one with terrorist ties.

Rep. Omar is a refugee from the violence of warlords and terrorists in Somalia who came to the U.S. as a girl and rose to become a congresswoman because of her devotion to her new country and the trust she gained among her constituents that she would carefully steward their interests. Hers is a quintessential American story. Seven of the thirty-nine signers of the U.S. Constitution were foreign-born, one in the West Indies. For Rep. Omar to be tagged unjustly with the very violence that drove her from her homeland as a child must be deeply upsetting.

Boebert, addressing a small group of constituents in a living room, told a story (which Rep. Omar contests) that she was getting into an elevator in the Capitol when a policeman came running toward her with alarm on his face. Puzzled, she looked around and saw that Rep. Omar was in it with her. She alleged that she reassured the policeman that Omar did not have a backpack and so it was probably safe. She said that she then used the phrase “jihad squad.”

“Fact, this buffoon looks down when she sees me at the Capitol, this whole story is made up. Sad she thinks bigotry gets her clout.

Anti-Muslim bigotry isn’t funny & shouldn’t be normalized. Congress can’t be a place where hateful and dangerous Muslims tropes get no condemnation.”

Boebert, having seen how Rep. Gosar was stripped of his committee assignments, must have feared something similar would happen to her, because she uncharacteristically backed down and apologized if any Muslims were offended by her remarks.

We should be clear that there is no difference between talking this way about prominent Muslim Americans and using the N word for African Americans or various negative epithets for Jewish Americans and Asian Americans. It is bigotry and hate speech. There are on the order of 3.7 million Muslim Americans, a little over 1% of the population, and they are the pillars of their communities. A proportional number are physicians and nurses, keeping us healthy and risking their lives at the front lines during the pandemic.

Moreover, as Omar herself noted in a tweet, tagging Muslim Americans as terrorists is an incitement to mobs to lynch them, and Rep. Omar is already the victim of large numbers of death threats. Anti-Muslim hate crimes spiked

In what has become a widely cited and classic essay, “Top Ten differences between White Terrorists and Others,” I pointed out that “white terrorists are never called white.” Boebert and her violent friends use this privilege to avoid the consequences of their deeds and plots, smugly sitting in Congress while conspiring to commit terrorism with Oath Keepers, Three Percenters and Boogaloo Bois.