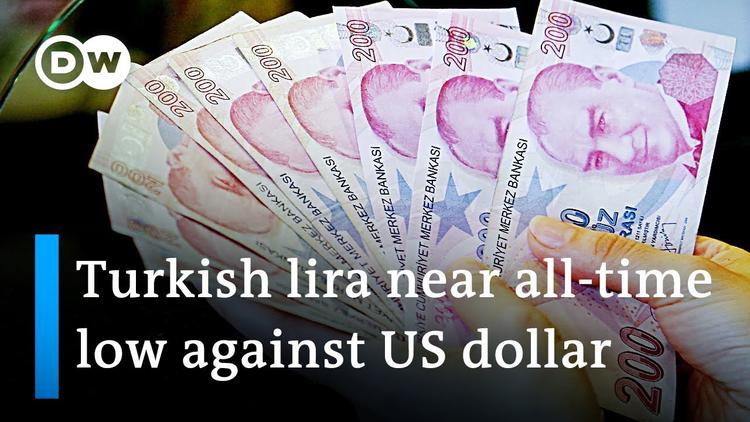 ( Middle East Monitor ) – On what was called “Black Tuesday” in the media this week, the value of the Turkish lira against foreign currencies declined sharply, bringing the exchange rate to 13.5 Turkish liras to the US dollar. While experts on the matter in Turkey and elsewhere are unanimous in attributing this to the Turkish Central Bank’s decision to reduce interest rates, President Recep Tayyip Erdogan described what was happening as a “war of economic independence”.

The situation has reached the point where the media are drawing a parallel between the depreciation of the local currency and the expansion of Turkey’s role in foreign affairs. One individual defending the government’s monetary policy argued with some degree of sarcasm that the exchange rate of the lira against the dollar and other hard currencies could be lowered by following policies in line with what the West dictates: withdraw Turkish forces from Libya, Azerbaijan and Syria; give up Turkey’s rights in the eastern Mediterranean, pleasing Greece in the process; release activist Osman Kavala and Kurdish politician Selahattin Demirtas; and basically submit to Western domination.

Government supporters say that Turkey is growing as an international power, and this is the reason for the hostility being shown by global superpowers which want to bring the country to its knees. They add that they are willing to make all kinds of sacrifices for the sake of the country’s prosperity.

Erdogan has replaced the minister of finance and the head of the Central Bank three times within one year, and the bank made contrary decisions regarding interest rates with each of the changes, both decreasing and increasing them. However, they did not achieve the desired results of stopping the deterioration of the local currency and reducing inflation and price rises of basic essentials. Government critics consider that such fluctuations in monetary decisions are a sufficient reason for the loss of confidence by local and foreign investors, which has a negative effect on the gross national product, unemployment and poverty levels.

READ: When silence is the best diplomacy

Naturally, the opposition parties are making political capital out of the economic turmoil and blame the government’s decision-making, which means, in reality, the president, who has full executive power in his hands. The opposition parties have taken the opportunity provided by the Turkish Lira’s “Black Tuesday” to take action with renewed momentum. The People’s Alliance led by Kemal Kilicdaroglu and Meral Aksener held an “urgent meeting” and have demanded early elections.

Generally speaking, the Republican People’s Party (CHP) chairman Kilicdaroglu has, for some time, behaved as if he is the head of state. He called on state bureaucrats to refuse to obey any orders from politicians that contradict the law, and threatened them with being held accountable, implying that a change of president is imminent. For the first time in the history of the CHP, its representatives in parliament voted against renewing the permission for the government to send military forces to Syria and Iraq. In a move that was seen as “historic”, Kilicdaroglu announced that he would ask for forgiveness from the social groups that have been subjected to injustices at the hands of the state at different times during Turkey’s modern history, whether or not the CHP was responsible for them.

In short, Kilicdaroglu is addressing the Turkish people directly as he tries to give them confidence in change and in the opposition’s ability to solve the problems that the government has failed to solve. The opposition parties agree that the key to change is to return to the parliamentary system and get rid of the presidential authority system where one person holds all the power in his hand.

To what extent will the people respond to these opposition campaigns? It is too early to say. It is true that periodic opinion polls generally suggest a large and steady decline in the popularity of Erdogan’s Justice and Development Party (AK Party), but this decline is not matched by an upturn in the popularity of the opposition parties, although the results of some of these polls indicate a boost in possible voter turnout for the opposition coalition. However, the most prominent factor is the increase in the percentage of undecided people who have confidence in neither the ruling AK Party nor the opposition.

In addition to these opinion polls, interviews with people on the street have appeared in the media frequently. Their comments should worry Erdogan about losing the popular support that has kept the AK Party in power for the past twenty years.

A cause for additional concern is what the journalist and AK Party MP Samil Tayyar described as a “trap” set for the president by the condition that a presidential candidate must obtain 50 per cent plus one vote to win under the new presidential system.

On the political level, Erdogan declared his concern openly about this condition, and left it to parliament to deal with. Meanwhile, his partner in the People’s Alliance, Devlet Bahceli, the leader of the Nationalist Movement Party, declared his adherence to the 50 per cent plus one condition, considering it to be the basis for the legitimacy of the presidential system. An urgent meeting took place between the two partners immediately after Bahceli’s statement.

Bahceli is afraid of losing his party’s representation in parliament due to the ten per cent barrier in the election law, but is committed to his alliance with the AK Party. However, because of his insistence on defending the aforementioned condition regarding the presidential election, it seems as if he is abandoning his ally Erdogan at one of the most difficult times experienced by the AKP since it came to power in 2002.

Bakr Sidqi is a Syrian journalist.