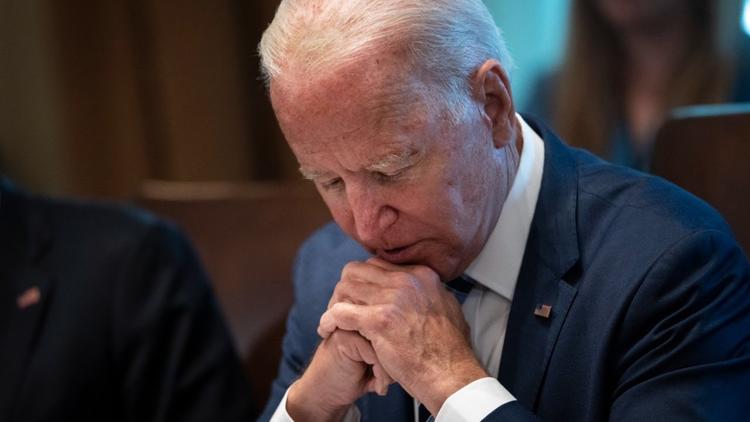 Oakland, Ca. (Special to Informed Comment) – We learned from Dr. Strangelove that all it takes to blow up the world is one sexually insecure Air Force general and one wacko wing commander . . . also that there is an upside to a nuclear holocaust if you’re well positioned. But who is?

Destroying American Democracy however, is more complex, requiring one gross demagogue and an army of enablers, who have a variety of ambitious motives. But just as ambition killed Caesar, we can only hope it kills Donald Trump and his enablers before “Democracy Dies in Darkness.”

The at-risk status of American Democracy is being aided and abetted by a complicit media and a Democratic Party, deeply insecure in its identity. What we have here is a failure to communicate . . . on the part of Democratic leaders since about 1981. That was when they started letting Ronald Reagan and Republicans frame the terms of every debate and issue. Rather than object to and resist his bromide that “government is the problem, not the solution,” Democrats have tried to re-package themselves into something palatable to Republicans and so-called “swing voters.” That is the term for those who drift and waffle with the political winds; those who lack a firm belief system or ideological commitment, and are swayed by the latest sensational fear-mongering – “They’re coming for your guns;” “They will bring socialized medicine.”

The media has been complicit, if not manipulative in this effort. Reagan’s reign of terror on American poor people coincided with the birth and rise of USA Today; a sensational, jingoistic rag that now owns daily newspapers in every American market. It’s hard to find a local newspaper that is NOT afflicted with Gannett’s cookie cutter approach to content, art and design, mostly void of locally generated content. Gannet has destroyed local papers nationwide, terminating local staff and content, in favor of a distinctively right-wing, corporate presentation, which is uniform f rom the Detroit Free Press to the Commercial Appeal (Memphis) and Poughkeepsie Journal./

Many media publishers don’t recognize there are not always two valid and logical sides to every argument. Balanced journalism doesn’t mean you have to dignify Holocaust deniers, science deniers, or even attempt to humor them. They need to be called out and “branded.”

The term “political moderate” is a squishy one. Let’s generously say it is “evolving.” At one time it meant a politician who plays the role of the conciliator or consensus-builder; an elected official who avoided devotion to either side of the political spectrum.

But as the political spectrum has shifted, so has the definition of terms. If Joe Manchin and Kirsten Sinema are “moderates,” then it now means “evasive, treacherous Trojan horse traitor” or something to that effect. “Conservative” used to mean a fiscally responsible Republican, devoted to a balanced budget. Then it came to mean some who favors minimal government involvement in . . . everything. Now it’s pretty close to Fascism. When Ronald Reagan declared government to be the enemy, and that the lessons and experience of the Civil Rights Movement no longer mattered, it set the Republican Party on a path of redefinition, culminating in Donald Trump’s attempt to end American Democracy on January 6.

George Bush Sr. won the presidency by making the word “liberal” sound like “something you wouldn’t want to step in with new shoes.” (I can’t claim that quote, but I can’t find the original source.) He frightened the medical industry into believing that Michael Dukakis would institute “socialized medicine,” which would have devastating consequences on doctors’ incomes. Dukakis may have been the most inept campaigner in American History. Republican doctors went crazy about that. At the same time, Republicans dismissed the homeless crisis as a temporary dynamic caused by “the de-institutionalization” of so many mental health patients. But they omitted Reagan’s DIRECT role in causing this national crisis.

For decades, “socialism” has been the Republican Right’s favorite pejorative to describe any government program designed to help people, especially people who are not white Republicans. Though both Eisenhower and Truman eloquently disposed of the notion that a safe infrastructure and water supply, fire and police services, public education and libraries were “socialism,” that word still scares many Americans into voting for Republicans. That’s one trick for getting people to vote against their interests.

The Republican propaganda machine takes no rest. It never stops generating false alarms and phony, manufactured outrage. They will never stop gerrymandering efforts or their aggressive voter suppression. It’s the ONLY way they can win, and is now embedded in their platform and strategy. They generate false alarms when there is no fire, and it works for them. EX: Critical Race Theory is not taught in Virginia schools. But GOP candidate Glenn Younger’s gubernatorial campaign was focused on demagogic attacks on this education concept. Post columnist Paul Waldman characterized it as, “turning the Virginia gubernatorial campaign into a referendum on whether White students are being cruelly forced to think about racism . . .”

The core issue in the Virginia governor’s race was about school curriculum, and it became the ONLY issue, after Gov. Terry McAuliffe vetoed a bill that would require schools to give parents approval or rejection power over textbooks and content. Republicans want to ban more books, but McAuliffe vetoed that. Younger took that for political fodder, to argue that parents have a right to decide what their children learn. That’s true to the extent that they can take their kids out of public schools, and place them in faith-based segregation academies. Public schools are for the public.

Republicans run on hypotheticals while Democrats ignore the realities of 21st Century politics. Namely that Republicans have totally dispensed with civility under Trump, after getting prompts from Reagan to use it for convenience.

The motivation behind not allowing CRT to be taught in schools reflects the Republican urgency to re-write and re-frame history. The dog whistles are heard only by the meanest and dirtiest dogs. The rest of the pack doesn’t hear or care. Only the “target market” gets it, and that’s enough to make a difference in a close election.

Donald Trump’s presidency has made dog whistles obsolete to a degree; they don’t have to be vague or apologetic anymore. The precedent was Ronald Reagan’s 1980 campaign kick-off in Philadelphia, MS, the site of the 1963 murders of James Cheney, Andrew Goodman and Michael Schwerner. Reagan used the site and occasion to give the “all-clear” signal to Southern bigots to come out and act out. His message was, “You can stop apologizing; this doesn’t matter anymore, and government is evil.” That empowered Republicans to stop being vague and apologetic about their racism. Trump took Reagan’s playbook and agenda, and shot it with steroids.

Democrats need to respond in kind. Characterizing the Republican direction as “Fascism” under Trump isn’t a dog whistle, but a shout out to reality. The 2020 Election, January 6 and the weeks in between exhausted the nation. People took a break from politics; and Republicans upped the ante, while progressives and Democrats let down their political guard.

The media is not the “enemy of the people” as Trump declared. NASCAR is! “Let’s Go Brandon” might be a dog-whistle, but it’s all out in the open now. Reagan and Trump told followers they don’t have to pretend to be civil anymore, so why bother? Apparently President Biden is universally loathed by all NASCAR drivers and fans, because a post-race interview led to a chant of “Fuck Joe Biden,” which morphed into the Republican battle cry of “Let’s Go Brandon.” Driver Brandon Brown won the race that day, and the crowd responded by chanting “Fuck Joe Biden.” NBC reporter Kelly Savast tried to whitewash the thing by saying the crowd was chanting, “Let’s Go Brandon.” https://www.youtube.com/watch?v=axcmVFtwSM4 That was the media’s latest gift to the far-far right. Republican pride in loss of civility is encapsulated here: https://www.youtube.com/watch?v=L2lMz1x98pI

So NASCAR races are now Republican pep rallies, just as the 1962 Ole Miss-Alabama football game became a Klan rally led by Mississippi Gov. Ross Barnett. When he declared, “”I love Mississippi! I love her people! Our customs. I love and respect our heritage,” it sent the crowd into a frenzy, and the Ole Miss riots occurred the next day. Then, AG Robert Kennedy sent 500 Federal Marshalls to put down the last battle of the Civil War – the 1962 Battle of Oxford.

One win in a presidential race did not end the madness of Donald Trump and his followers. It only made them mad and they’re not going away. Washington Post columnist EJ Dionne assessed the recent Republican win in the Virginia gubernatorial election by saying, “ . . . hostility to Biden mattered more than alarm over Trump.” Oy. Democrats won’t and can’t win without the same urgency and aggressive voter registration campaign, which propelled Biden to the White House and flipped Georgia. If January 6 was not a sufficient wake-up call, then the Republican effort to re-write that narrative should be, or Democracy WILL die.