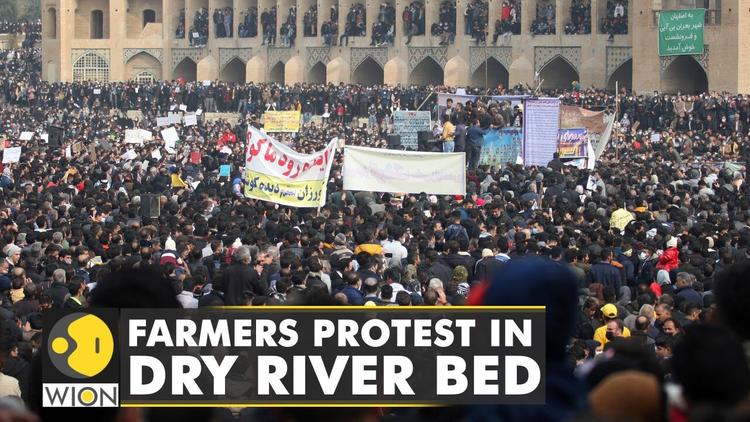 Ann Arbor (Informed Comment) – After two weeks of protests by thousands of farmers in the dry riverbed of the historic Zayandeh Rud river in Isfahan, the police have struck back. According to AFP, thousands of people gathered to protest on Friday, when the police attacked them with bird shot and tear gas. Three were said to be taken to hospital. Demonstrations broke out as well inside the city, and the demonstrators were attacked by the police. Protesters set fire to a police motorcycle and some trees according to the Iranian press.

“IRIB [Islamic Republic of Iran Broadcasting] is trying hard to belittle the people by calling the protests “tiny” and to create a rift between the farmers of Isfahan and the people.

How hard they tried to prevent the people of Isfahan from gathering on Friday, but the people came.”

The protesters returned on Saturday and there were further clashes, with the policy using water cannon, tear gas and live fire to clear the streets. Police general Hasan Karami announced that 67 arrests had been made.

Regime news outlets maintained that the real farmers had agreed to go home and await official action on Wednesday, and that the protesters on Friday and Saturday were counter-revolutionary agents provocateurs. This assertion is, of course, a lie.

The Iranian press quoted Brig. Gen. Hasan Karami as saying that whereas 20,000 to 30,000 farmers had been protesting until Wednesday, on Friday some 3,000 pro-monarchy elements and hypocrites (i.e. Mojahedin-e Khalq or People’s Jihadis, the anti-regime MEK) wielded knives, threw stones at police and committed sabotage, including setting fire to the farmers’ tents.

Of course it was the police who set fire to the protesting farmers’ tents. And his estimate of the number of protesters Friday is likely way too small.

On Saturday there were protests inside Isfahan and other cities. AFP reported clashes between demonstrators and police on the Khaju Bridge over the Zayandeh Rud.

Some 97 percent of Iran is in a condition of drought, and there have also been water protests in Ahvaz and elsewhere.The 1.8 degree F. increase in the average surface temperature of the earth in the past century has hit Iran especially hard, increasing heat and dryness and intensifying periodic droughts. That is, Iran has always had droughts from time to time, but the 2021 one is drier and longer because we have heated up the earth by spewing greenhouse gases from burning gasoline, natural gas and coal into the atmosphere. Ironically, Iran is a major petroleum producer and so is providing the kindling for its own bonfire.

“About a third of Iran’s 24 most important wetland areas, home to hundreds of species of birds and vital for supporting biodiversity, are under threat or in critical condition, according to the UN Environment Programme. In areas like Sistan and Balochistan — as in Khuzestan — there are villages with no access to water. Efforts to restore these bodies of water have largely failed because aquifers — reserves of water that lie underground — have been depleted,”